New coronavirus restrictions in the UK, rising case counts in parts of Europe, and lack of a new US fiscal package weighed on market sentiment.

Wednesday, September 23 was a risk-off day – the S&P 500 fell about 2.4%. How did bonds do as a hedge? Chart below: the usual visual about how well/bad bonds are working as a hedge when equities drop a lot. Recently, very badly with September 23 dot particularly bad. Founder Jens Nordvig notes that 2020 is different. (Also read Jens’ Part II Fixed Income is Dead, Long Live FX). 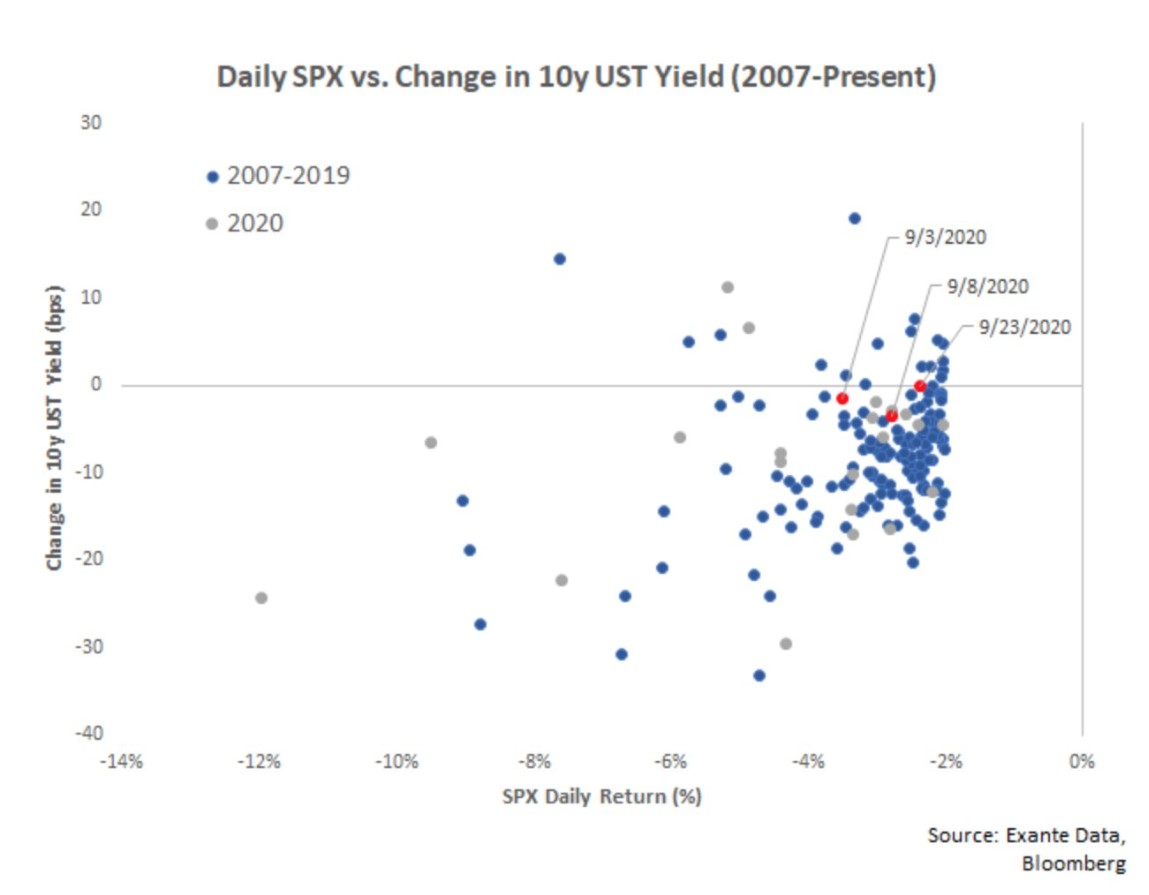 On Thursday US equity markets stabilized mildly as House Democrats said they were putting together a new USD 2.4 trillion stimulus plan. Jens conducted a twitter poll post Supreme Court Justice RBG’s passing on whether this unfortunate event impacted the probability for a new stimulus package ahead of the US election on November 3. Results are seen below. See results from Jens’ first US fiscal stimulus poll from September 16 here.

On Tuesday – the UK announced new coronavirus restrictions. That evening PM Johnson updated the nation. New COVID rules for England are expected to run for the next 6 months and include : Mandatory masks in retail; Pubs and restaurants 10pm curfew; Work from home if possible; 15 person limits for weddings; 30 for funerals; Rule of 6 for indoor sport; Reversal of plans to allow some fans into sport events; Larger fines for breaking rules; Military support for police if needed.

UK-based Senior Advisor Chris Marsh notes that the emphasis is on keeping schools and businesses open while curbing spread. However, large areas of the north are already under stricter lockdown rules, including Greater Manchester, the North East, parts of Yorkshire and the Midlands. On Friday, it was announced that Cardiff, Swansea, and Llanelli will go into lockdown this weekend, meaning about half the population in Wales will be under enhanced measures.

Enhanced measures in the UK vary by region, but include: working from home wherever possible, restriction on meeting between households beyond the usual “rule of 6,” restrictions on travel. While shops and restaurants are open, there is no mixing between different households. Overall, perhaps 25% of the UK population are under enhanced lockdown beyond the generalized social distancing measures. So far, Greater London has been spared additional intervention but has been placed on the “watch-list” for enhanced measures.

On Thursday, Chancellor of the Exchequer Rishi Sunak announced a new “job support scheme” to replace the furlough which expires late-October. Targeted at SMEs, the new program will run for 6 months from November. An employee working 1/3 of normal hours will receive 77% of normal pay, with government contributes 22 percentage points. Chris notes that this scheme asks employers to take much of the burden of the impact of COVID over the winter months, “it’s difficult to see many employers paying 55% of the wage for 33% of the hours for 6 months just to keep a worker on the payroll. This makes the BOE’s job more difficult in that they will now have to fill in for fiscal missteps.”

Ahead Next Week: select economic releases:

USD broadly strengthened on the week. $DXY index moved from a low of around 92.75 to a high of 94.70 by the week’s end. Rising coronavirus case counts in the UK and parts of Europe weighed on both GBP and EUR. GBPUSD range 1.2960 – 1.2680.  EURUSD range 1.1870 – 1.1614 (on Friday). Higher beta AUD, NZD, NOK, and SEK were impacted the most among G10 FX by the risk-off environment and rocky performance of US equity indexes. MXN also declined notably (the most in the heatmap) – along with other EM FX vs USD on global risk aversion. PBOC fixing signals turned more bearish CNY on a couple of occasions — we think further fast appreciation is not welcome. EM equity flows turned negative again over the last week. 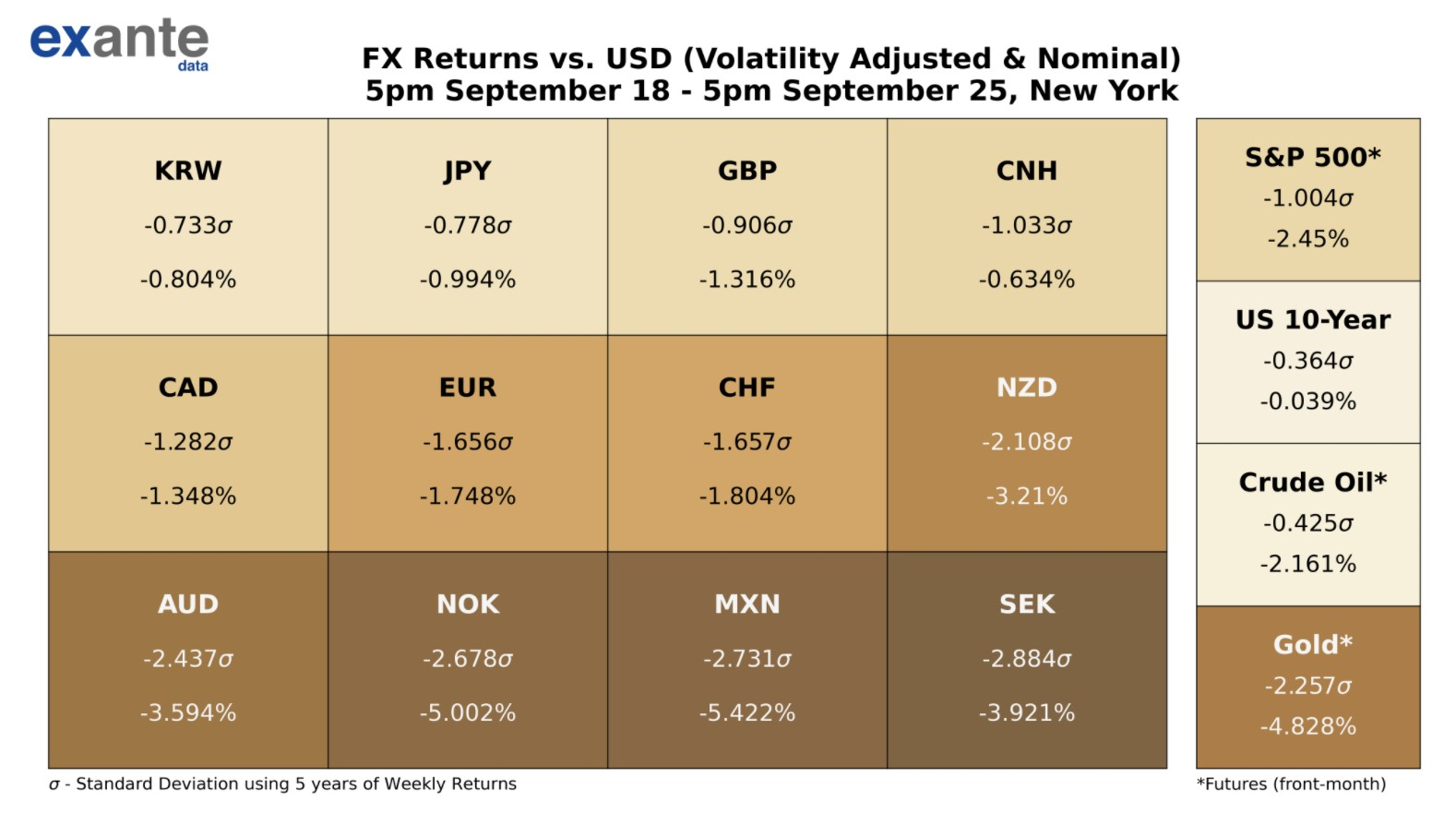 US initial jobless claims came in at 870k for latest read – a bit higher than last week. Chart: Daily New Online Jobs Postings Y/Y% for US states with the largest economies and National. National Postings peaked Sep 4, declined, and have now now flattened out. Florida and Illinois new online jobs postings have held up better than National. You can see our Daily New Online Jobs Postings heatmap for all US states here. 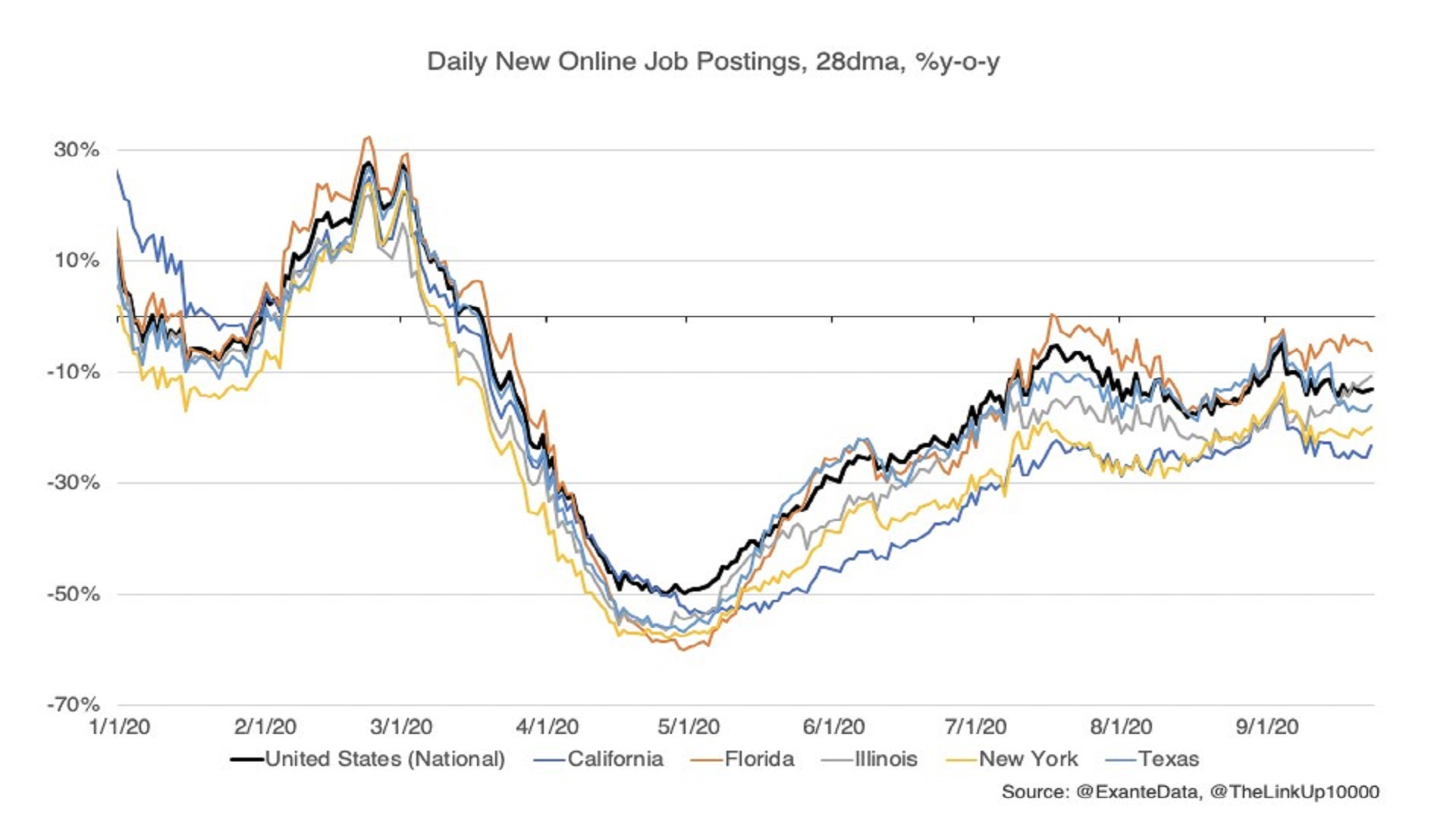 International: Spain reports ongoing case growth at 1.7% daily, while France and the UK each recorded spikes in daily confirmed cases recently, taking 7-day growth to 2.5% and 1.1%, respectively. In Mexico, case growth is stabilizing at 0.6%, though hit ratios have risen based on the latest data.

Overall, we expect case growth to continue in Europe over the next 1-2 week. But in 3-4 weeks time, we would expect a degree of levelling off in new cases, based on governmental policy shifts (even if moderate) and changes in individual behavior (less relaxed). European death numbers are set to edge higher (to 300-400/day), see chart below, but we do not expect dramatic hospital pressure in the near-term.

US: Multiple Midwestern states indicate increasing case growth, though the national median stands at 0.7%. Wisconsin stands out for its growth rate of 1.9%, though Utah (1.4%) and Minnesota (1.0%) are also of concern. The period of descending case growth appears to be over, and the question is how broad-based the growth will be, and whether it will mostly be isolated to states with low counts in the first and second waves. On Friday, Florida Governor DeSantis announced that the state will no longer require bars and restaurants to operate at less than full capacity.

Charts below look at coronavirus daily case counts in the UK and France. Both countries have had recent fresh peaks denoted by the red bars. The cumulative case counts are in parenthesis. The UK reported over six thousand cases on Thursday, as daily average cases now exceed four thousand per day, up from 1.4k per day as of end-August. France continues to record elevated case growth of 2.5%, as hit ratios now trend upwards of 5%, with trend daily case counts comparable to Spain at above 10k.

Chart: Comparing second waves in the US and Eurozone, our forecast shows some growth in fatalities over the next few weeks in the Eurozone, with daily deaths reaching 325 by Oct 14. 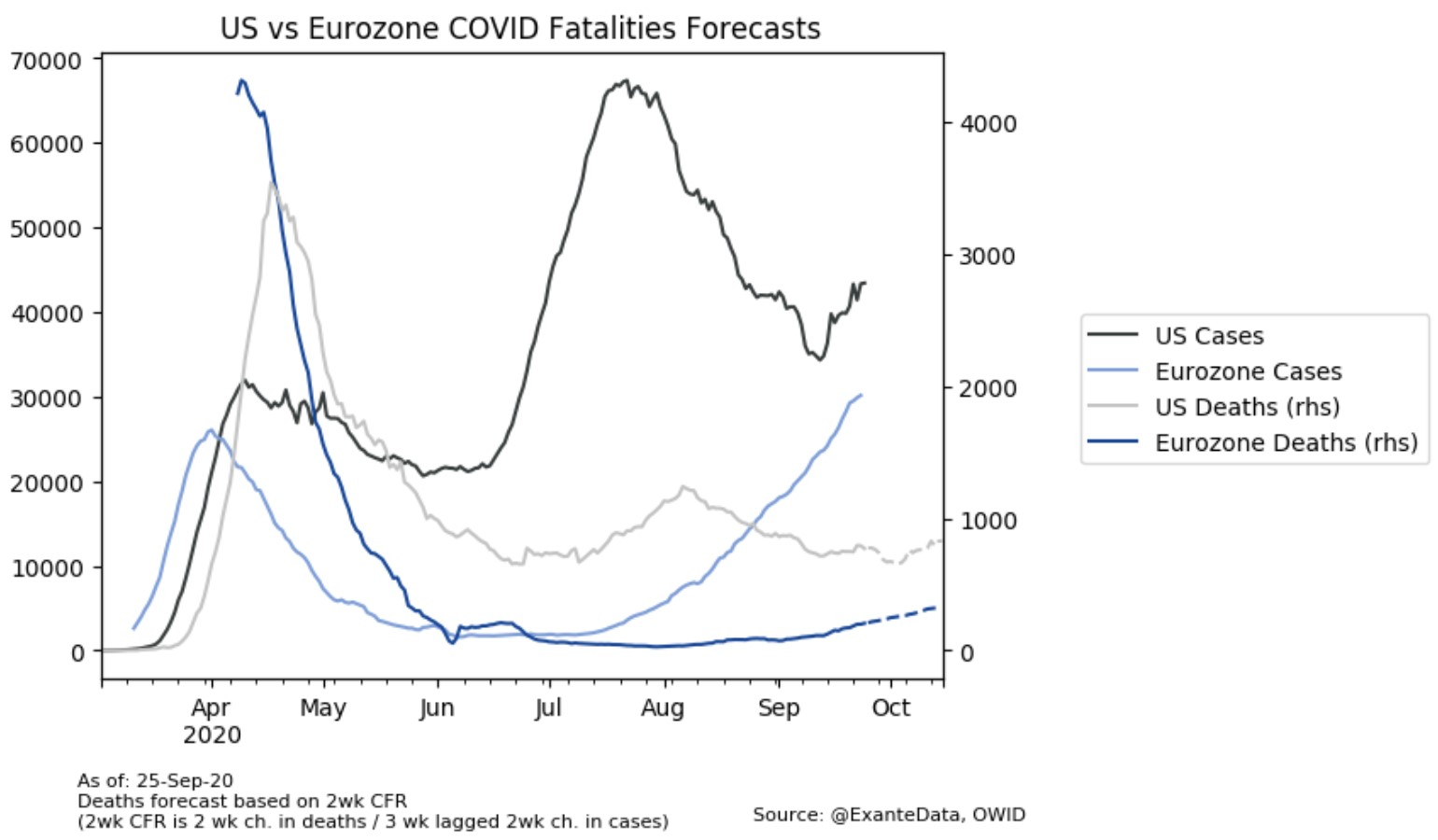 Country Page – South Korea added: Our Country Pages take a look at the most important idiosyncratic data points and charts for the individual country. This week we launched a new country page for South Korea. The page provides information on the foreign assets (size/holdings/purchases) of the Korean pension and lifers which are increasingly important for understanding portfolio outflows (as is the case in Japan and Taiwan as well). The aim is to supplement our traditional “intervention” tracking of the Bank of Korea with data on pensions/lifers to get a more holistic picture of the net foreign asset position and monthly portfolio asset flows of the Korean public sector (broadly defined).

Bloomberg users – you can view Exante Data tweets on the terminal. We update charts and commentary daily there.  Users can type into the blue command line: TWEETS BY EXANTE <GO>. Alternatively, to add to Launchpad:  1. Run SOCI <GO> 2. Type into the orange box Exante 3. Select the handle at the bottom “TWT_EXANTEDATA” 4. Click the white LLP <GO> to Open in Launchpad to view in Launchpad mode 5. To save the search >>> Click Actions in the top red tool bar >> Save Search

Jens will be joining @thalesians to talk “Forecasting USD using capital flow data.” In this webinar, Jens will discuss how capital flow data can be used to forecast the dollar, in particular using high frequency estimates of these capital flows from Exante Data. This online event is free and open to the public. It will be held Wednesday 30 September at 6:30pm BST (London time) and 1:30pm EST (New York time). Sign up here.

Head of Asia Pacific Grant Wilson’s opinion piece, China is intervening in currency markets by stealth, for the Australian Financial Review was the top read article when it was released. “It looks increasingly likely that China has been intervening to suppress the value of the yuan while avoiding international scrutiny.”

Senior Advisor Brad Setser quoted in WSJ article Turkey’s Unexpected Rate Rise Gives Lira a Lift.  “Faced with a low rate of rollovers in 2018, Turkey’s banks pulled foreign-currency deposits they had at the central bank and used those to repay the loans. While analysts expect banks will have enough to pay back whatever isn’t rolled over this time around, it is another source of pressure on the financial system, said Setser.”

Brad Setser spotted a significant milestone for the Fed, which now holds more Treasury notes or bonds than all the world’s other central banks combined. “The Fed, not China or anyone else, ultimately can set U.S. long-term rates.” from Bloomberg Business.