This week, CDC Director Robert Redfield gave fairly specific guidance, saying at a Senate hearing that he sees a COVID-19 vaccine being “generally available to the American public” in the “late second quarter, third quarter 2021.”  On Friday, President Trump said that the US will have vaccine doses for all Americans in April.  In addition, the US Commerce Department announced that it would begin banning downloads and updates of TikTok and WeChat apps on Sunday.

On Friday, Senior Advisor Brad Setser gave a timely interview on the subject as well as on the US-China trade deficit and CNY strength. Setser notes, “The US hasn’t been very clear on the demands it was placing on Tik Tok. The whole deal with Oracle for awhile suggested that TikTok/ByteDance could retain majority control which would be unusual. I think China is also flexing its muscles trying to limit the export of various source code. For now, the US seems to be signaling it wants a shift in majority control and the company is caught in between.”

The FOMC kept rates unchanged and implemented its forward guidance at its policy meeting this week.  Founder Jens Nordvig talks about the market reaction or lack thereof here in this interview – “Its really hard for the Fed to shock the market since we have the curve priced so low all ready. So I don’t think we had any huge surprises at this specific meeting. The result was out of the bag because Average Inflation Targeting had all ready been announced.” The interview discussion continues beyond the FOMC’s latest action and Jens talks how monetary policy is increasingly about  fiscal policy,  why our focus currently is on emerging markets, takes a look at one of our alternative data charts, and talks how the Covid-19 second waves in US and Europe are different from the first.

The Bank of England kept policy unchanged last week, with unanimous agreement of the MPC. Senior Advisor Chris Marsh noted that the meeting sounded a cautious tone on the recovery, saying the “outlook for the economy remained unusually uncertain,” while the unemployment rate was expected to rise sharply. Chris makes the point that given concerns expressed by MPC members in recent weeks, the possibility of increased asset purchases extended into 2021 looks probable at the November meeting. Regardless, the baseline is “conditioned on the assumption of an immediate, orderly move to a comprehensive free trade agreement with the European Union on 1 January 2021” suggesting further downside risks in the event of a hard Brexit.
Chris emphasizes that perhaps the most important news from the meeting, however, was the fact that the MPC was briefed on how a negative Bank Rate could be implemented should the outlook warrant. Meanwhile, the “Bank of England and the Prudential Regulation Authority will begin structured engagement on the operational considerations in 2020 Q4” implying that preparations for negative rates are going from the abstract to the concrete. This suggests that such a move to negative Bank Rate would be a possible policy response in the event of a hard Brexit providing an additional drag to GBP.
Ahead Next Week: select economic releases:

The USD was softer this week. As seen in the heatmap, a portion of the weakness occurred vs Asia FX — KRW, CNH and JPY.  We note that USD/Asia is catching up to the forces from lower US yields, changes in tourism and terms-of-trade, which are all supportive for CNY, KRW, TWD and JPY.   Re: CNH strength – Jens notes that the the 4% decline in USDCNH over the last 3-months is at the very limit of the historical distribution of returns. The speed of the move is faster than normal.  Re: JPY strength this week – shows preliminary signs that JPY may finally be converging within G10. (See Media section below to get Brad Setser’s thoughts on Asian intervention in FX market).  Re: G10 FX – the DXY traded above and below 93.00 ending the week on the figure. With an absence of negative Brexit headlines for the time being, GBP gained from the high 1.2700s to 1.2915 area by the week’s end. Down sessions in S&P 500 weighed on NOK. AUD and NZD help up, however. EUR traded lower Thursday to around 1.1750 area but came back Friday, ending the week at 1.1840. 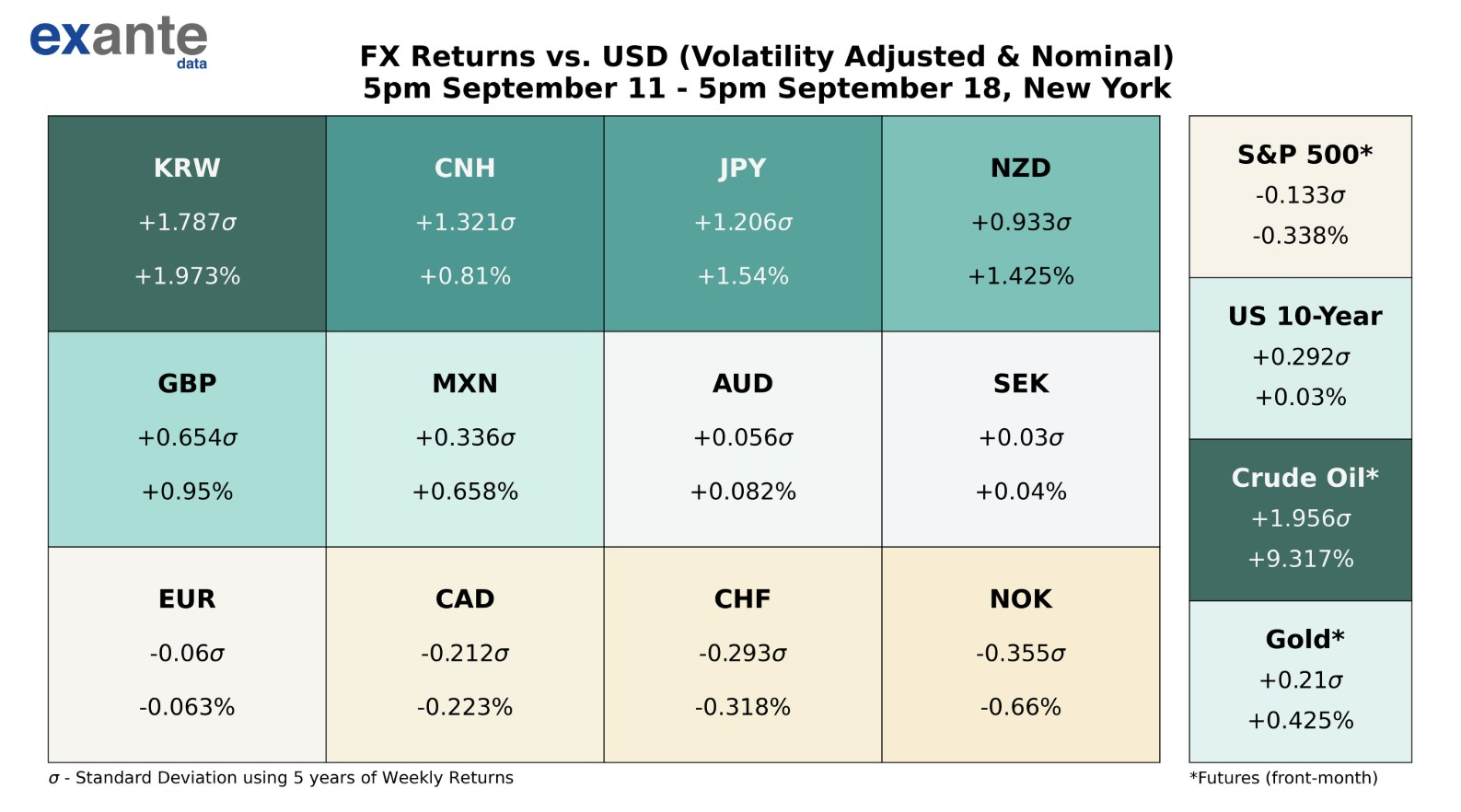 This week, we released Public Letter Part II: Fixed Income is Dead, Long Live FX – A New regime With Different Risk Characteristics. It has more analysis, based on the feedback we have received over the past month on Part I of the letter, which was released in early August. Jens writes, “The demise of fixed income has two main aspects: low (and in some case negative) yields, both in nominal and real space; and a structural break lower in fixed income volatility. The beta proposition has eroded, and the opportunity to generate alpha has also diminished.”  (tweet this)

Head of Asia Pacific Grant Wilson highlighted the concerns we have for risk parity (and other volatility targeting strategies) in this altered environment. You can read his opinion piece ‘All Weather’ Risk Parity Strategy Loses Its Shine in the Australian Financial Review or see this thread for key points/excerpts.

Jens notes that in this altered environment, there are “profound implications for FX.” We highlight just one here (see Public Letter for others) – we are seeing some long standing correlation properties starting to break down. “The standout here is USDJPY (chart), which has become decided less ‘risk-on’ over the course of this year. This bears close watching, as the second most traded cross in FX…As the world has changed, and risk properties associated with currencies are evolving too.” 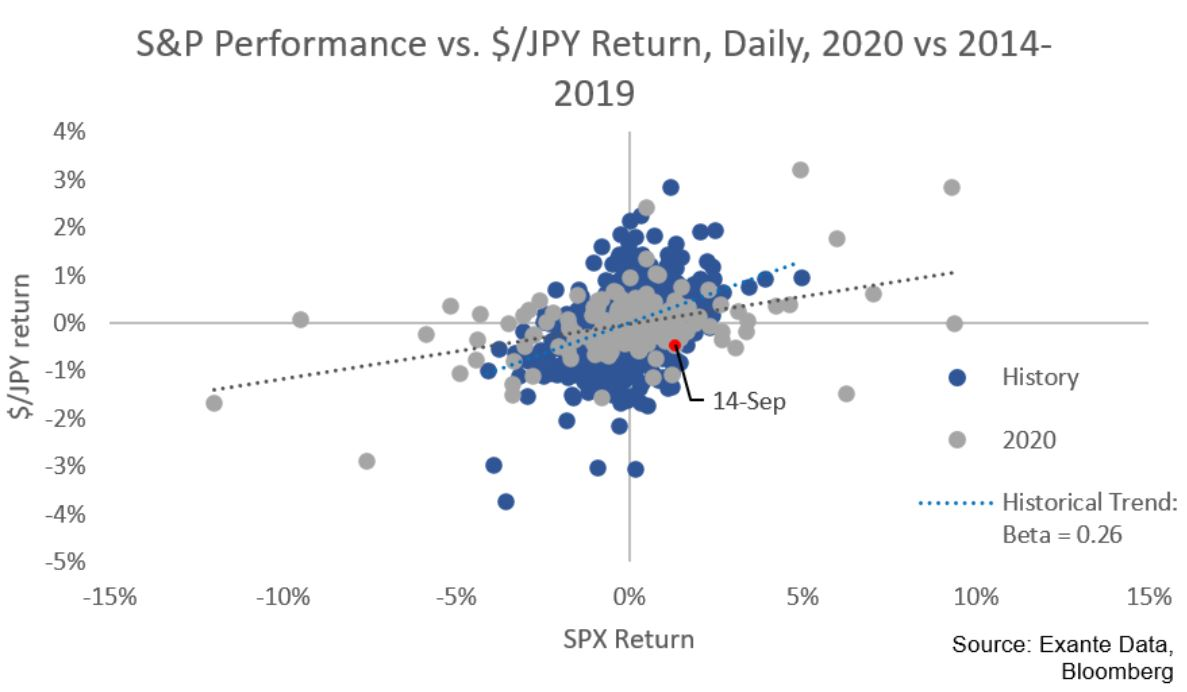 US: A majority of states report daily case growth below 1.0% and declining or stable hit ratios. Wisconsin’s spike persists, however, with case counts and hit ratios exceeding previous peaks.

Reviewing global mobility indicators from Google, we find – while retail and recreation patronage in the US has weakened during September, Eurozone and global GDP-weighting indicators show continued improvement, perhaps even at increasing speed. Among EM countries, Google data show increasing retail patronage in Brazil, Chile and Colombia, concurrent with stabilizing COVID trends. India also reports increasing mobility with respect to retail and recreation. Overall, improvement in EMs are significant.

Chart: Latest data (Sept 11) show G10 countries at 94% of pre-COVID baseline mobility in this Retail & Recreation. This mark is a modest 1 percentage point improvement versus the week prior. Meanwhile, taking a GDP-weighted average of the world ex-G10 (and China), the Google data show ongoing improvement. The latest figures show world ex-G10 retail patronage at 93% of baseline, on a weekly improvement of fully 5 percentage points. Moreover the gap between G10 and EM is now the closest observed since March. 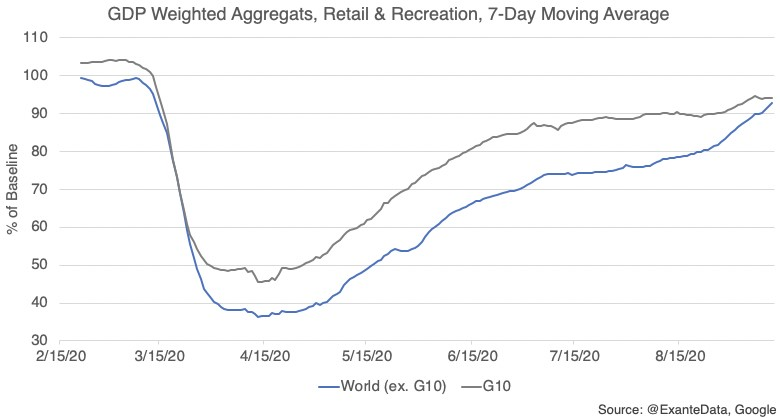 Chart: Among G10 countries, the US showed a decline versus benchmark in the latest figures. As a sidenote, the latest week of data for the US includes the Labor Day weekend. By comparison, in the Euro Area retail and recreation patronage has increased. 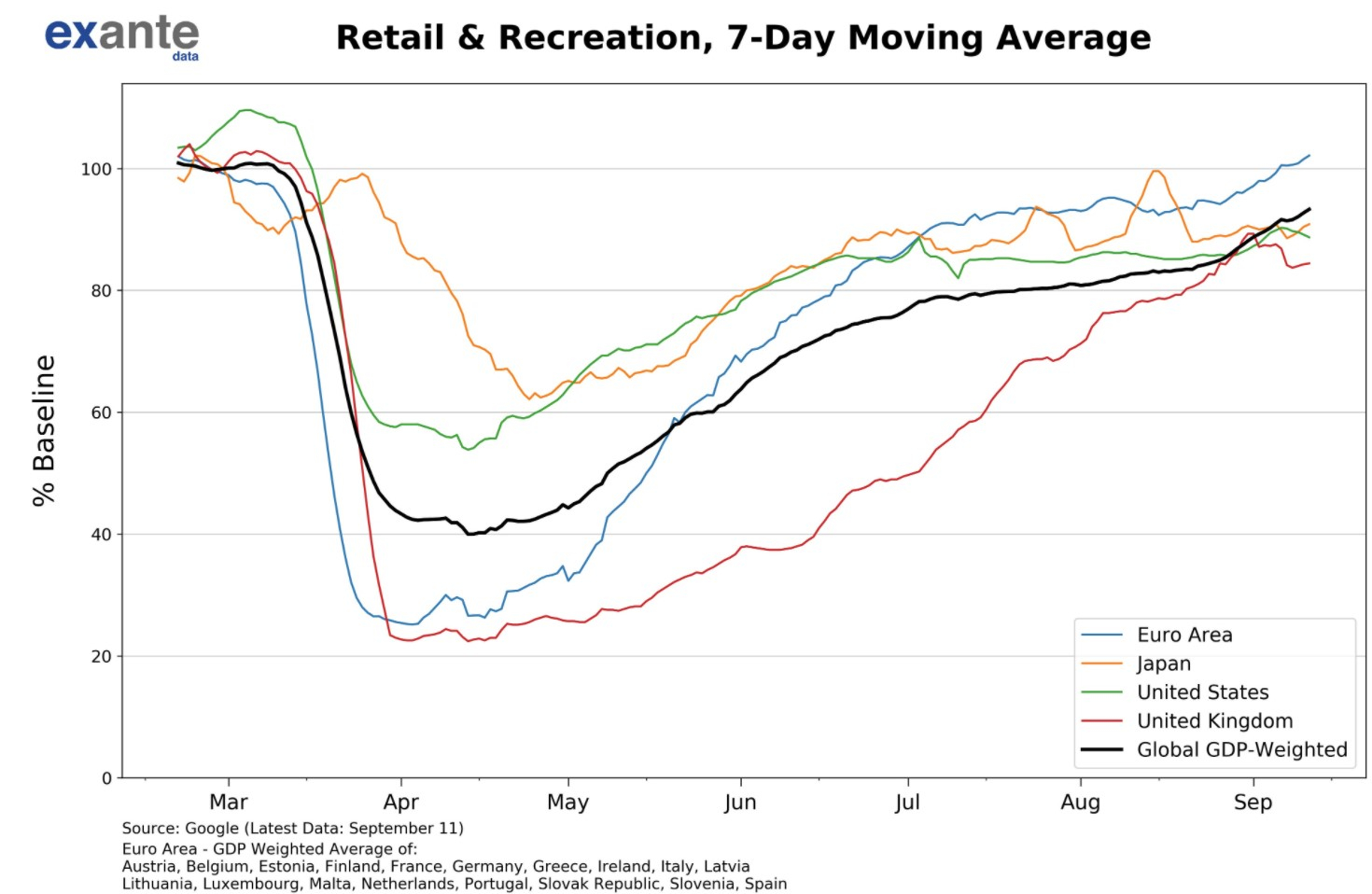 We recently launched our: Global Liquidity Monitor (GLM), which tracks major central bank balance sheet expansion and liquidity developments; Country Pages, which take a look at the most important idiosyncratic data points and charts for the individual country; and Data Explorer, which gives multiple ways to find the data you want quickly and easily in our 70k series database along with helpful functions to get raw series CSVs.

For more information, Scandies call replay, and/or to see a demo of our data platform, institutions — please reach out to us here.

Media appearances by Jens Nordvig and Brad Setser have been highlighted throughout the newsletter along with Grant Wilson’s opinion piece on risk parity for the Australian Financial Review.

For more on Foreign Exchange, see Brad Setser’s new blog out for the Council on Foreign Relations: Asian Intervention in the Foreign Exchange Market is Back. Bigly.  “Joe Gagnon and Fred Bergsten have called the years from 2003 to 2013 the decade of manipulation, as a host of Asian countries protected their competitive position of their exporters by intervening massively in the foreign exchange market. Is a new decade of manipulation about to start, as Asian exporters once again try to keep their currencies from rising?”