US equity indexes fell on the week, unsettled by quickly rising US yields:  DJIA -1.8%, S&P 500 -2.4%, NASDAQ -4.9%. There are macro dynamics in motion that we have never seen before, and asset markets are, correctly, responding to great uncertainty ahead. Moves seen on Thursday were borderline disorderly.  Despite the Fed trying its best to convey strong and dovish forward guidance (via Powell and Brainard speeches this week), US rate markets moved in a big way on Thursday,  including in the short end.  EDZ2 moved >15bp at some point (closing down 13bp), and the market is starting to price a hike by end-2022 as the central case.

While much less severe that the episode in March last year, the rapid repricing of nominal and real yields was sufficient to weigh on equity markets, along with Gold, and even Bitcoin.  When US Treasury yields spiked in March 2020, the Fed stepped in with incredible force (chart, blue huge bars). Since then, purchases have been stable, adding up to $120bn/month (blue+red). Founder Jens Nordvig notes, “The Fed can in theory increase its buying again, but it would be a controversial step. Equities are down only marginally (in a medium-term sense) and credit has barely moved (from all-time tights). It would be tricky to communicate ‘easing’ at this stage of the cycle.” 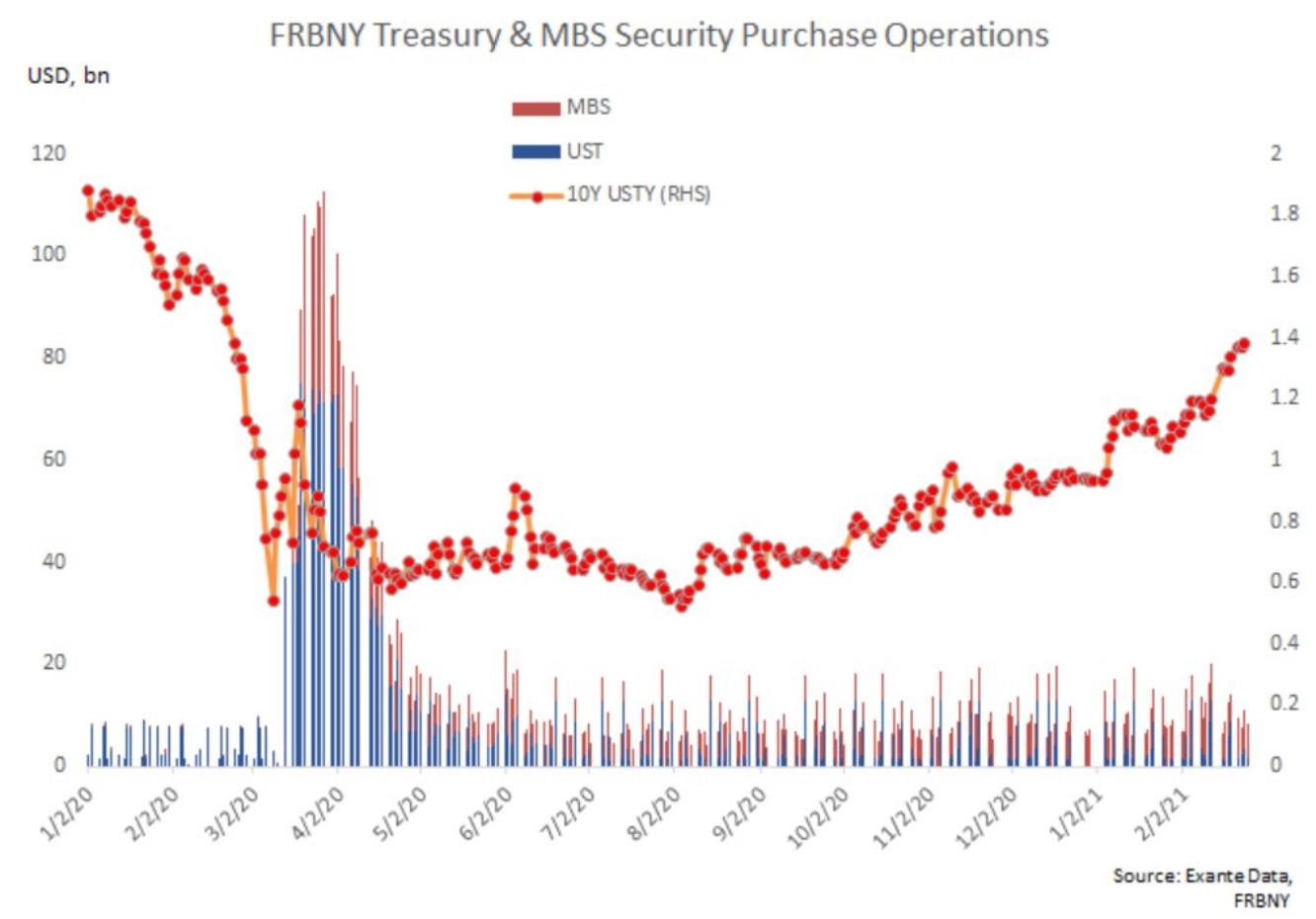 Notes from Senior Advisor Chris Marsh, “On Friday, the Bank of England’s Chief Economist Andrew Haldane, in a speech recorded on Thursday, sounded a warning about inflation risk when the pandemic ends: ‘there is a tangible risk inflation proves more difficult to tame, requiring monetary policymakers to act more assertively than is currently priced into financial markets.’ This contrasts with the more dovish views of external members on the MPC, for whom rate cuts remain live. Monetary policy responses when lockdowns end, with scope for policy substantial mistakes, will be fascinating to watch in coming months.”

USD strengthened on the week on risk aversion and rising yields. Though the rate move is global, this past week, the US yield curve had a parallel move, which is more USD supportive than a steepening move. The possibility of short-end rate shocks (even if market driven) makes it harder to hold short USD risk from here.  The VIX index rose above 30.0 on Thursday, helping the USD to strengthen on risk aversion, especially vs high risk EM currencies that day (MXN, TRY, ZAR, BRL).  Turning to the G10, the DXY Index had weakened to 89.69 (below 90.0 support) on Thursday NY morning before coming back during the volatile trading session and then hitting a high of 90.95 on Friday.  EURUSD ranged 1.2240-1.2064. GBPUSD ranged 1.4212 – 1.3887 – the low coming on Friday. Higher beta G10 FX weakened on the risk off move as did the other safe haven currencies JPY and CHF. 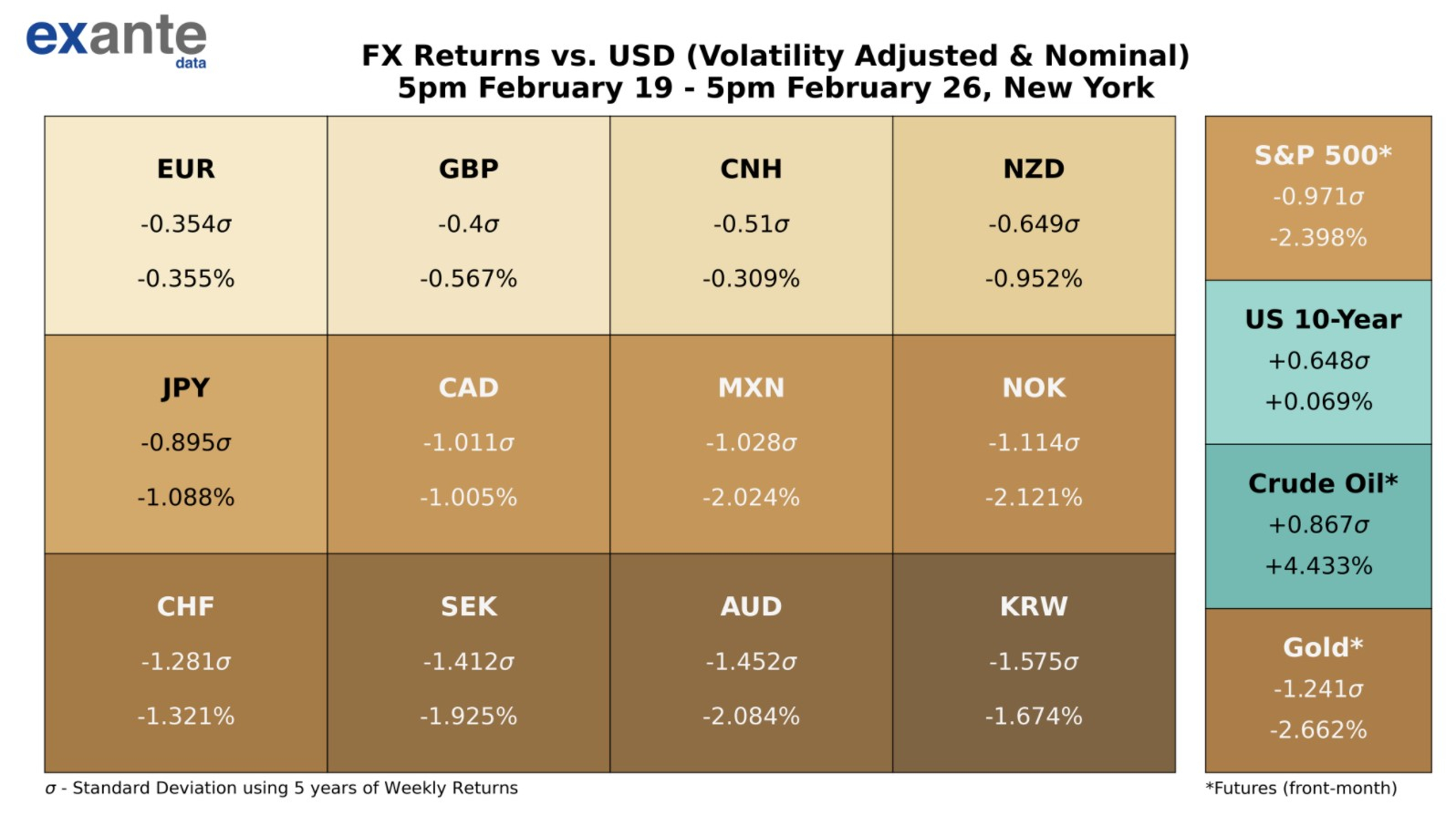 On Monday, the UK released its roadmap to reopening (starts on page 24).  There are four steps to reopening along with four tests to determine whether the next reopening step can be taken. The four steps are detailed (see roadmap document for infographics) and the reopening plan is cautious.  Step 1 starts on March 8 – schools reopen, though the stay at home order remains in place. Step 4, the final step, “will take place no earlier than 21 June…” Step 4 is the major reopening with no limits on social contact and when larger events will reopen.  It is possible that the increased danger from the UK strain has influenced the conservative reopening timeline.

Despite the strong vaccine rollout in the UK with a growing share of vulnerable groups now vaccinated, there has been a multi-week plateau in the hospitalization rate. Left chart: The hospitalization rate plateaued around 7% despite the falling test positivity ratio (aka hit ratio). Right chart: However, we do see some clearly positive signs in the share of deaths attributable to vulnerable groups such as people 70+.

Turning to the US, Covid cases continue to plummet. However, we are skeptical that this is “the final descent” driven by vaccines. There is still risk that the UK strain spreads in the US, or that super-spreader events shift the trend at least in some states (although we are not seeing any strong evidence that the UK strain is clearly accelerating yet). In that regard, we continue to watch our measure of case momentum for early signs of a potential 4th wave. This measure has been stable to good in recent weeks but in the last two days we are seeing some signs of shifting momentum, such as in Michigan and South Dakota. However, this turn in momentum is occurring when cases are very low relative to peak levels so we are not concerned yet.

On Friday, Johnson & Johnson single-shot Covid-19 vaccine candidate was unanimously recommended for emergency use authorization by the US FDA advisory committee. Axios reports that the FDA is expected to make a “final decision within days” on the J&J vaccine. (Pfizer/ BioNTech and Moderna are the only other vaccines to have received emergency use authorization so far). Speaking on Tuesday, Dr. Richard Nettles, VP of U.S. Medical Affairs, Janssen Infectious Diseases and Vaccines for Johnson & Johnson  said, “assuming necessary regulatory approvals relating to our manufacturing processes, our plan is to begin shipping immediately upon emergency use authorization, and deliver enough single-doses by the end of March to enable the vaccination of more than 20 million Americans. We are confident in our plans to deliver 100 million single-dose vaccines to the United States during the first half of 2021…”

We are pleased to announce a new tool for clients on our data and analytics platform: The FX Range Projection Tool. It examines seasonal variation in FX performance and volatility. Users can see the historical average performance and volatility for most EM and G10 crosses by month and year and compare this to current/recent FX performance.  The goal of this tool is to assist in picking entry and exit points for trades, based on the size of moves realized historically.

Special Advisor Tor  Vollalokken published a Substack blog: The Norwegian Krone is becoming a “global” currency (Part I).  “The Norwegian Oil Fund is the world’s largest sovereign wealth fund. As the fund continues to grow rapidly, Norway and its currency (NOK) becomes more exposed to global finance than to oil prices.”

Head of Asia Pacific, Grant Wilson, published a new opinion column for The Australian Financial Review on 21 February: The war between nation states and big tech is just getting started. “Big tech collided with democracy this past week in Australia, India and the United Kingdom. Rather than gaming the next step, fundamental lessons need to be learned.”