US equity indexes were up on the week: DJIA +0.6%, S&P 500 +1.9%, NASDAQ +4.2%. Wednesday was US Inauguration Day – Joe Biden was sworn in as the 46th President of the United States and Kamala Harris as the Vice President. On Friday, the US Senate Finance Committee unanimously approved Janet Yellen’s nomination for Treasury Secretary. Her candidacy will now go to the full Senate for a vote.

Looking at currency performance on Friday, Founder Jens Nordvig makes this point: “Global currency markets are hyper-sensitive to risk aversion at the moment, trading with much higher beta to equity moves than normal. Both in EM (RUB, BRL, ZAR, MXN) and in G10 (AUD, NOK, CAD).” See chart below – FX betas to S&P moves.

Senior Advisor Chris Marsh notes, “The problem being that FFC is not a concept easily quantified, but the media and markets prefer such clarity. The press conference therefore became confused and repetitive, contributing to the weakness of government bonds into the weekend.  After the meeting, it was reported staff have been asked to propose a gauge of financing conditions in time for the March meeting (11th March) and that a seminar will be held to ‘debate which indicators should be included, whether they should be looked at individually or condensed into an index, and how this should be communicated — if at all’ (Reuters).  Ultimately, confusion due to FFC means more PEPP firepower will be needed to sustain higher average yields, which will benefit neither the hawks nor the doves on the Governing Council. It would be better to get ahead of the communication challenge rather than keep markets guessing for the next 7 weeks about the strength of the ECB’s hand. There area several opportunities in speeches next week by key Executive Board members to clear things up.”

USD was lower on the week, as equities rallied (with the exception of Friday). The DXY Index remained above 90.00 support, finishing the week at 90.21. EURUSD ranged 1.2055-1.2185, capped by the political uncertainty in Italy. GBPUSD ranged 1.3521-1.3743. GBP remains supported by the positive vaccine roll-out in the UK. USDJPY ranged 104.06-103.32. The rise in US equity indexes supported higher beta FX. CAD strengthened due to a more positive economic outlook from the Bank of Canada on Wednesday. USDCAD ranged 1.2796-1.2598. 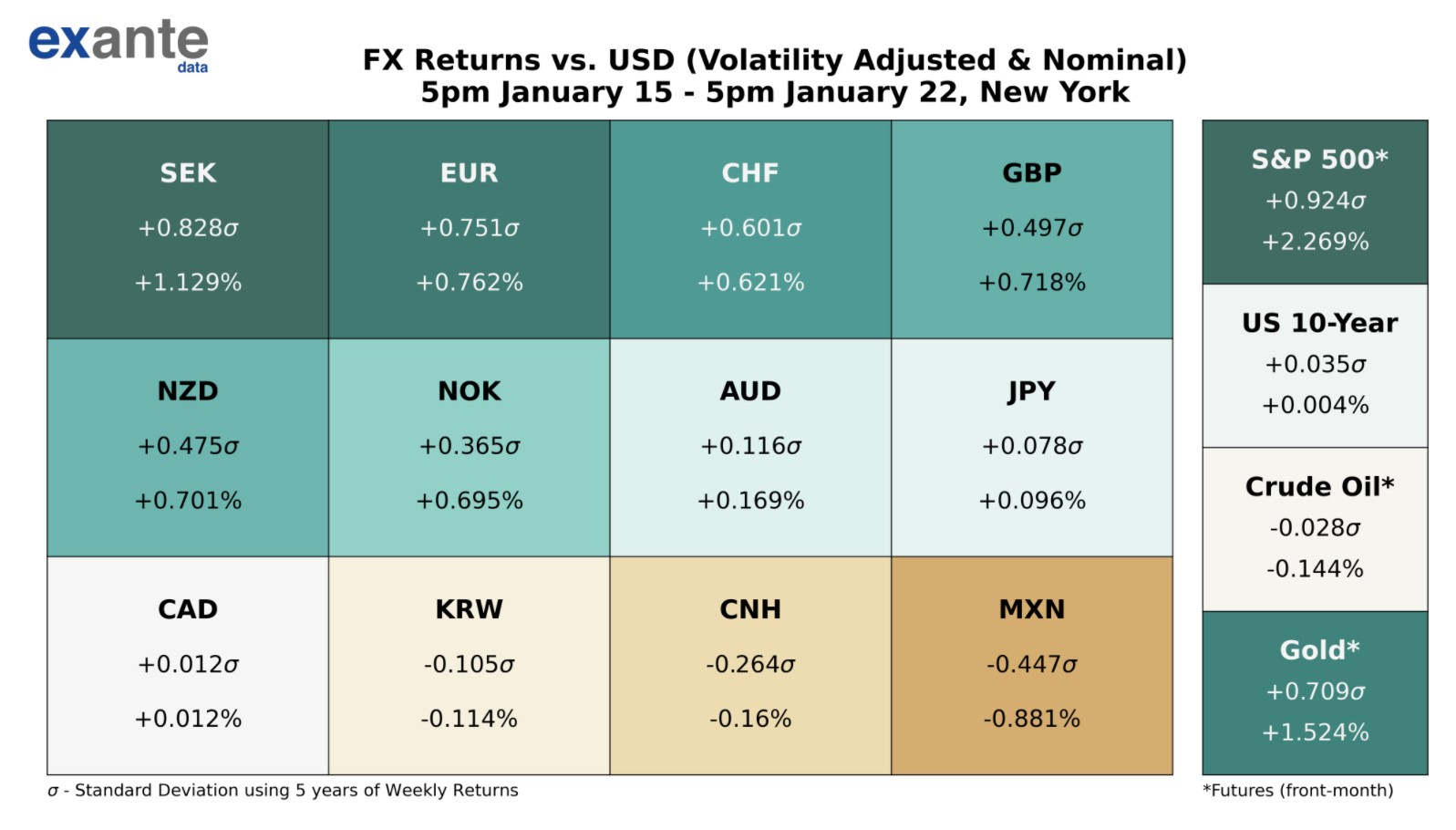 Last week, Pfizer announced renovation plans for its Belgian facility.  Bloomberg reported “Pfizer Inc. will decrease deliveries of its Covid-19 vaccine to countries outside the U.S. in the next three to four weeks and [that the factory] updates will help boost capacity beginning in mid-February…”

On January 19, the AP reported that Canada will not receive any Pfizer/BioNTech vaccines next week and will receive 50% less than expected over the next month. However, the the AP noted that Pfizer “is still expected to meet its contractual obligation to ship four million doses to Canada by the end of March.”  Likewise, Pfizer said that the EU experienced a temporary reduction in the number of vaccine doses delivered this week, but that the original schedule of deliveries to the EU would resume beginning the week of January 25, increase the week of February 15, and that it would meet the fully committed quantity of vaccine doses in Q1 and significantly more in Q2. On Friday, Stella Kyriakides, European Commissioner for Health and Food Safety, said via Twitter that “AstraZeneca announced delays in the delivery of vaccines [to the EU] compared to the forecast for the first quarter of this year.”

In his Friday coronavirus press conference, NY Governor Cuomo said, referring to  the vaccine dosages delivered to NY from weeks one through five, “We run out of allocation today [Friday].” Delivery of NY’s week six allocation of 250,400 vaccine doses will come in throughout the week ahead. Late last week Dr. Anthony Fauci, the US’s top infectious diseases expert, appeared on Meet The Press and said that emergency authorization use of AstraZeneca and Johnson & Johnson vaccines was “weeks away, not months away, for sure.” This would help ease vaccine supply constraints in the US.

Turning to the UK virus strain, unfortunately, UK PM Boris Johnson did not have good news in his Friday coronavirus press conference. Johnson said,  “in addition to spreading more quickly, it also now appears that there is some evidence that the new variant – the variant that was first identified in London and the Southeast – may be associated with a higher degree of mortality…” He suggested that it was the impact of the new strain that was putting the NHS under such “intense pressure” and noted that Covid hospitalizations are now 78% higher than the first peak in April.

The UK has announced a plan to vaccinate four  priority groups, representing 15mn people, by mid-February. The UK has vaccinated 5.1 million people or slightly more than 1/3 of the goal (chart left). Assuming it continues to vaccinate at the 7-day trailing average rate of 270,000 per day, it should take 37 days to reach the goal. In order to reach the original goal of February 15, daily vaccinations would need to stabilize at 400,000, higher than what we have seen so far (chart right).  See our Twitter feed for daily updates of US and global Covid charts and heatmaps.

We have two public Substack blogs on the topic of central bank digital currency (“CBDC”):

The latest was written this week by Senior Advisor Chris Marsh: The Mechanics of CBDC Issuance.  Chris takes readers through a series of  “simplified thought experiments.”

The first blog: China’s Digital Currency is a Game Changer (Part 1) was written by our Head of Asia Pacific, Grant Wilson.

Why the focus on CBDC?  Jens writes, “You may think that central bank digital currency is a far-fetched fantasy with little relevance to economic policy in coming years. But, institutional investors think it is around the corner in a number of jurisdictions…”

In early 2021, we conducted our first digital currency survey with 110 responses from various types of institutions globally. Below is one chart from the survey results showing that a large majority of survey participants expect the PBOC and other central banks to launch digital currencies over the next five years. But the sample is almost evenly split as to whether the ECB and the Fed will also move in a digital direction over that time period. 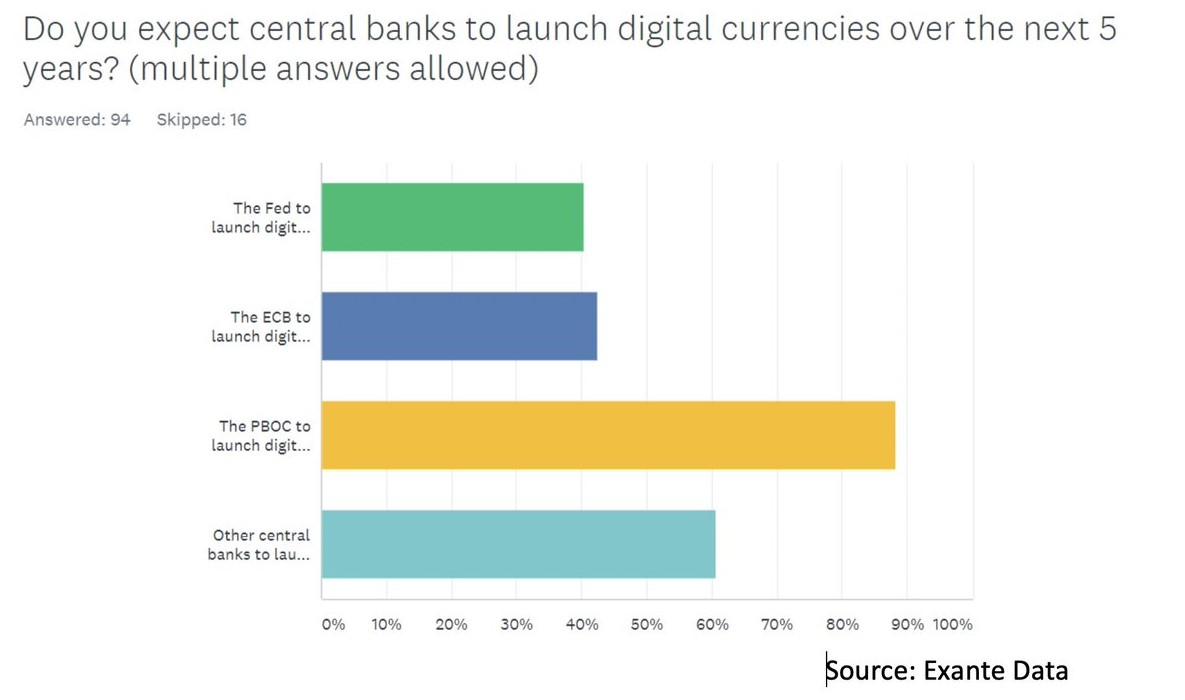 Grant Wilson joined the Wisdom Tree ETF Behind The Markets Podcast. He gives an overview of Exante Data’s macro view 10 minutes in and talks about China’s digital currency starting around 23 minutes in. This is an opportunity to hear some of our views in depth.

Advisor Amelia Bourdeau will be on our Exante Data Twitter feed (please follow) in NY mornings to interact and talk charts, markets, and Covid — you can find her there – reach out with market comments/questions/observations!

Join us in discussing and debating large, macroeconomic topics – Subscribe to our Substack here.

If you are an institution and would like more information on our Macro Strategy, Global Flow Analytics, and/or Exante Data API services — please reach out to us here.