US equity indexes rose modestly for the week: DJIA +1.0%, S&P 500 +1.2%, NASDAQ +1.7%.  The VIX index retreated to just under 20.0 on Friday.  The US 30 year bond yield (2.00%) is back to where it started 12 months ago pre-pandemic – that’s quick. The market is focused on the positives of additional fiscal stimulus and the US vaccine rollout. The US government struck deal to purchase 200 million additional Covid-19 shots – 100 million from Pfizer and 100 million Moderna.

Turning to EM flows: 2020 was a terrible year for EM, with pronounced weakness in asset prices and unprecedented capital outflows. But the global economy is shifting into a higher gear, and capital flows appear to be improving too.  While we have seen some EM buying since November, the general picture is one of limited EM exposure after historical weakness in 2020.  The chart below shows our standard tracking of EM flows – Nov-Feb is shaping up to entail a potentially bullish regime shift. (Worried about a taper tantrum impacting EM? Founder Jens Nordvig touches on the topic a bit in his Bloomberg interviews in the Media section – Jens talks US yield curve; Fed’s Powell anchoring the front end; reasons for 2 yr yield lower). 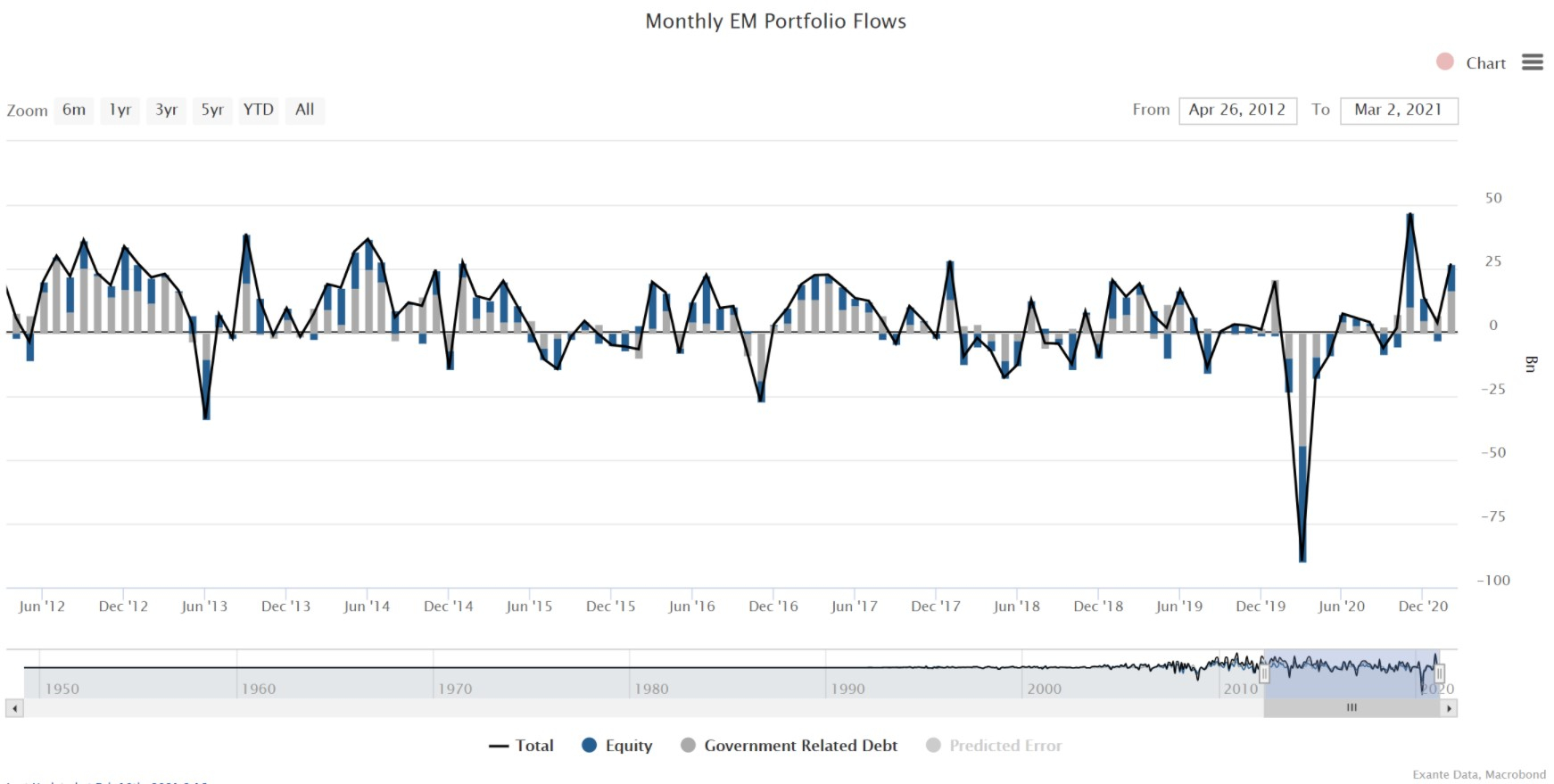 Euroarea: In an interview last week with Augsburger Allgemeine, the Bundesbank’s Jens Weidmann was asked for an inflation forecast, to which he responded he expects CPI in Germany to touch above 3% at year end. While acknowledging a number of special factors impacting prices (VAT, carbon tax), Weidmann also wondered how cumulated savings from the pandemic will be spent and with growing demand for services whether “innkeepers raise prices or not.” With inflation accelerating into mid-year, this will complicate the ECB’s policymaking and strategy review discussions.  At Exante Data, we are watching the inflation dynamic closely as economies open up after the lockdowns end.

The USD broadly weakened for the week, partly reversing the USD rally that began in January. The DXY Index ranged 91.59-90.26, ending the week at 90.44.  EURUSD ranged 1.2022-1.2145. GBPUSD ranged 1.3682-1.3861. As the EU vaccination rollout is slower than expected, the UK positive rollout stands out more – gilt yields have risen, supporting GBP vs USD. Cable rose to a high of 1.3861 on Friday, ending the week at 1.3853. EURGBP has continued its trend lower, ending the week at 0.8745 – just above 0.8700 support. AUDUSD ranged 0.7652-0.7768, rising on USD weakness, support from US equities, and rising Australia-relevant commodity prices. Upward momentum in global growth should support EM FX and higher beta FX against the USD. 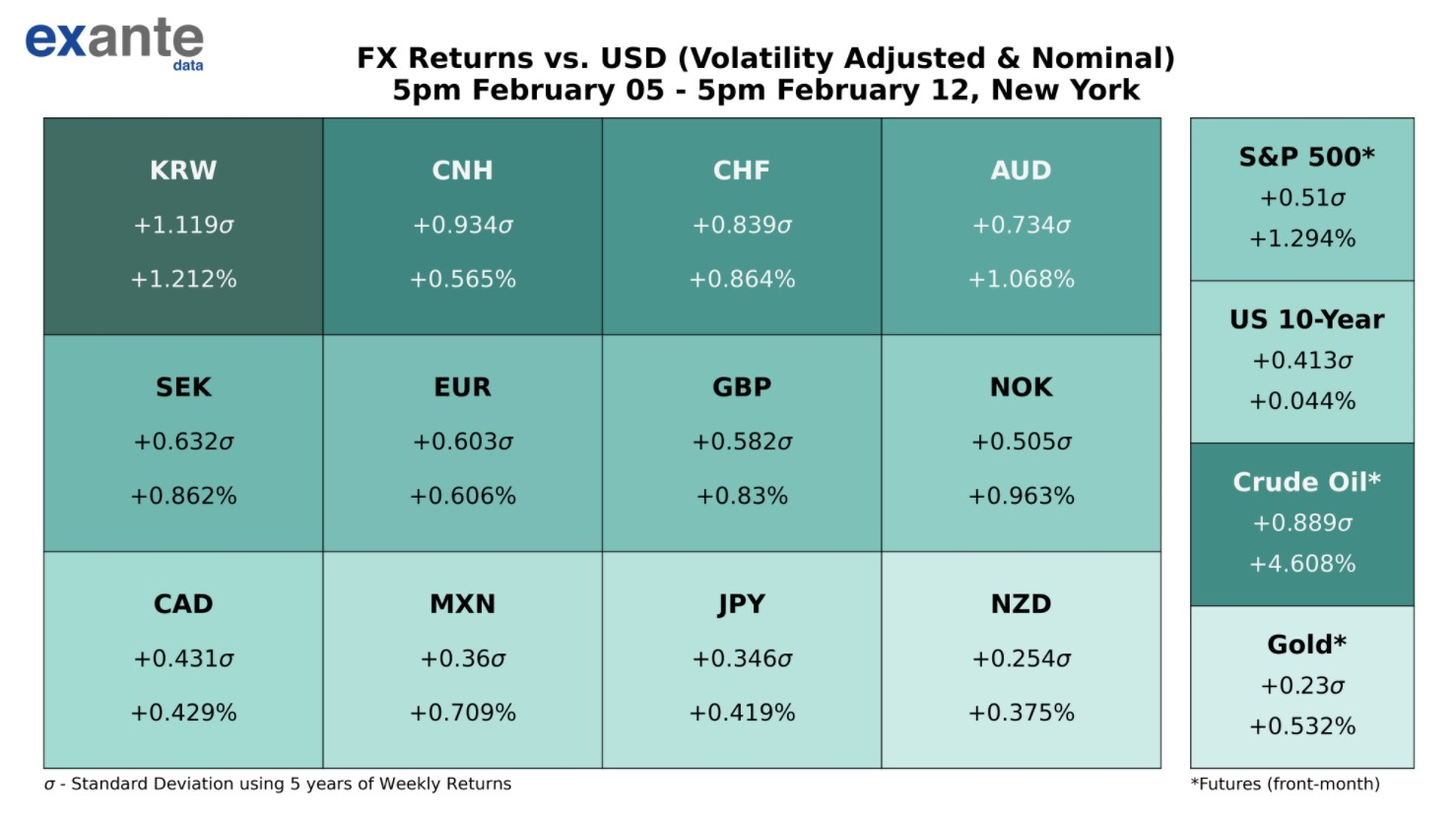 On Monday, Matt Hancock, the UK’s Health and Social Care Secretary noted that it “was two months to the day since the UK’s Margaret Keenan got her first jab as the first person in the world to be vaccinated with a clinically authorized vaccine for coronavirus.”

Five weeks ago, the UK set the goal of vaccinating 15 million of the most vulnerable. The target date is Monday, February 15. UK PM Johnson, in his Wednesday, February 10, coronavirus press conference stated, “We have made great strides with just over 13 million people now vaccinated in our United Kingdom including one in four adults in England, over 90 percent of everyone over 75, and over 90 percent of eligible residents of care homes for the elderly. But that leaves nearly two million people…that we still hope to reach…and there are people across the country who for one reason or another have not taken up their offer.”

That means that the UK has five days Thursday – Monday (EOD) to administer 2 million shots. Seen in the left chart below, new daily doses of vaccines delivered in the UK is over 400k, so the UK should be able to meet its target of having 15 million people receive vaccines by Monday. The chart on the right shows data updated through February 10 post PM Johnson’s press conference – the UK has given out 14 million vaccine doses – well on its way to the target.

Also on Wednesday, UK transport minister, Grant Schapps, gave an interview to BBC News which attracted a lot of attention -mainly disappointment- as he said, “First of all…people shouldn’t be booking holidays right now – not domestically or internationally.” Schapps said that PM Johnson would talk more about the route to unlocking the UK when he speaks on 22 February, but doesn’t know if Johnson will address summer holidays at that time.

Founder Jens Nordvig  gave a two part interview on Bloomberg Surveillance this week. In Part 1, Jens spoke with Tom Keene and Francine Lacqua about the US yield curve – parallel shift up vs. steepening and USD dynamics; the movement in the US 2 yr yield lower; and about the UK – GBP bullish forces include the positive vaccine rollout and the fact that BoE negative rate outlook is on hold.

Our former Senior Advisor, Brad Setser, also formerly with the Council on Foreign Relations, was appointed to the Office of the United States Trade Representative in the role of Counselor. Setser will be “providing advice on a broad range of trade and economic policy matters.”

Our Work on Digital Currencies:

Head of Asia Pacific, Grant Wilson, and Exante Data were featured in the reporting work of CNBC International’s Joumanna Bercetche. Bercetche reported on Why central banks want to launch digital currencies.  “Interest in bitcoin and other cryptocurrencies may be surging, but central banks don’t want to be left behind by financial innovation. In fact, more than 80% are examining how to launch digital versions of their own currencies.”  Watch the CNBC Reports video here. Read the accompanying article here.

Grant has a new opinion column out for the Australian Financial Review: Goodbye Reddit, Hello Clubhouse.  “Clubhouse is a cultural phenomenon that will transform the social media landscape and alter the conversation in financial markets.”

In late January, we launched a Digital Currency Series for clients. Our second installment was released this week – Grant Wilson takes a look at “The Elon Effect”. We continue to examine key differences between traditional capital flow analysis and modes of analysis that are available in Crypto. We extend this in the most recent note in the context of Tesla’s announcement that it has bought $1.5bn of Bitcoin (BTC), and may facilitate purchases of vehicles using BTC ‘subject to applicable laws and initially on a limited basis’.