On Friday, August US payrolls came in at 1.37 million, approximately on expectations. It was noted that  “In August, an increase in government employment largely reflected temporary hiring for the 2020 Census.” The unemployment rate fell to 8.4%, which was better than expected. Thursday, the CDC asked US states to prepare for a potential coronavirus vaccine distribution in late October. Also, Thursday, September 3, was a significant down day in US equities — The S&P 500 fell 3.5%.  We make a couple of observations on price action across markets in response:

First — how did bonds do as a hedge? Founder Jens Nordvig notes that yields on September 3 were down 1-2bp (10yr bonds rallied less than 0.2% in price). In the past, equity sell-offs of  >2% have been associated with median 10yr yield declines of 8bp — chart below. 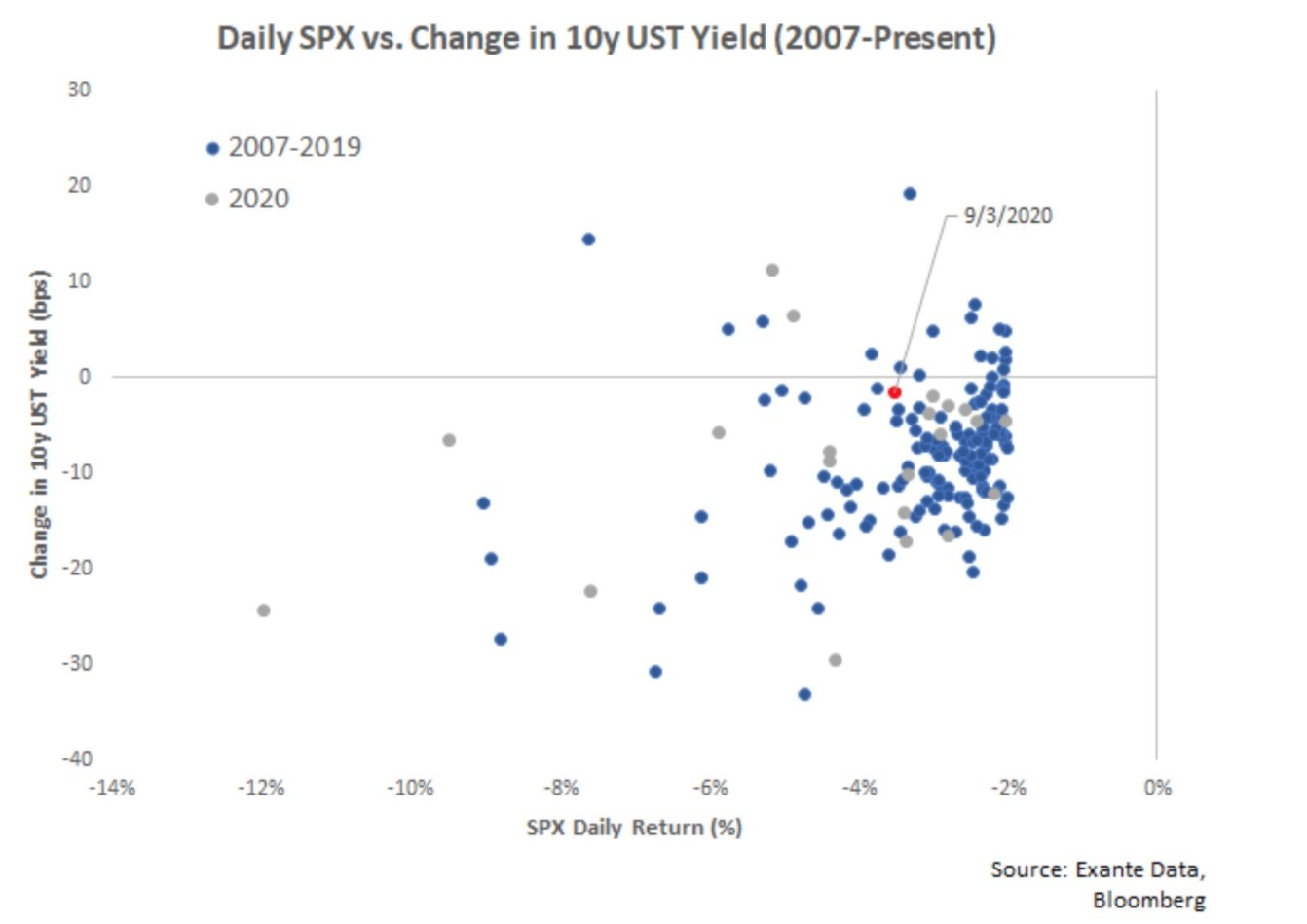 Second, EM currencies are holding up incredibly well in the face of the S&P weakness over the past few days (tweet). See chart below: Betas to S&P Moves. ZAR is the stand-out. But there are others — BRL and MXN outperformed this week (blue bars) relative to their historical relationship to the S&P 500. Normally, these ‘high beta’ currencies trade with a strong positive beta to the S&P. But recently, their betas were negative – they gained, while the S&P sold off.  The correlation break this week with certain EM FX outperforming their historical relationship to S&P 500 suggests a trending move is possible ahead so long as risk off remains confined to US equities and USDCNY remains stable.

Looking Ahead Next Week:

Head of Political Risk Analysis, Wouter Jongbloed notes that another official negotiating round on the EU/UK trade talks starts September 7, 2020. Referring to a recent earlier meeting with his UK counterpart Frost, EU Chief Brexit Negotiator Barnier referred to the negotiations as “difficult” and noted the EU should prepare for “all scenarios.” Wouter highlights that there has been a deterioration of expectations from Berlin and Paris and Barnier seems to be signalling that the negotiation’s process has come to an impasse and political leadership is needed to cajole and push for consensus (tweet).

ECB Monetary Policy Meeting announcement is Thursday, September 9th. Next week’s monetary policy meeting will include a new staff forecast. An informal Twitter poll on expectations for the ECB meeting (below) yielded the following results: 34% expecting verbal FX intervention next week, while about 30% expect PEPP expansion.  Founder Jens Nordvig notes that the question is whether the ECB can live up to expectations of this type, given that PEPP was controversial in the first place. We think the ECB is likely to disappoint growing expectations for PEPP expansion. See USD Heatmap section for comment on EUR. 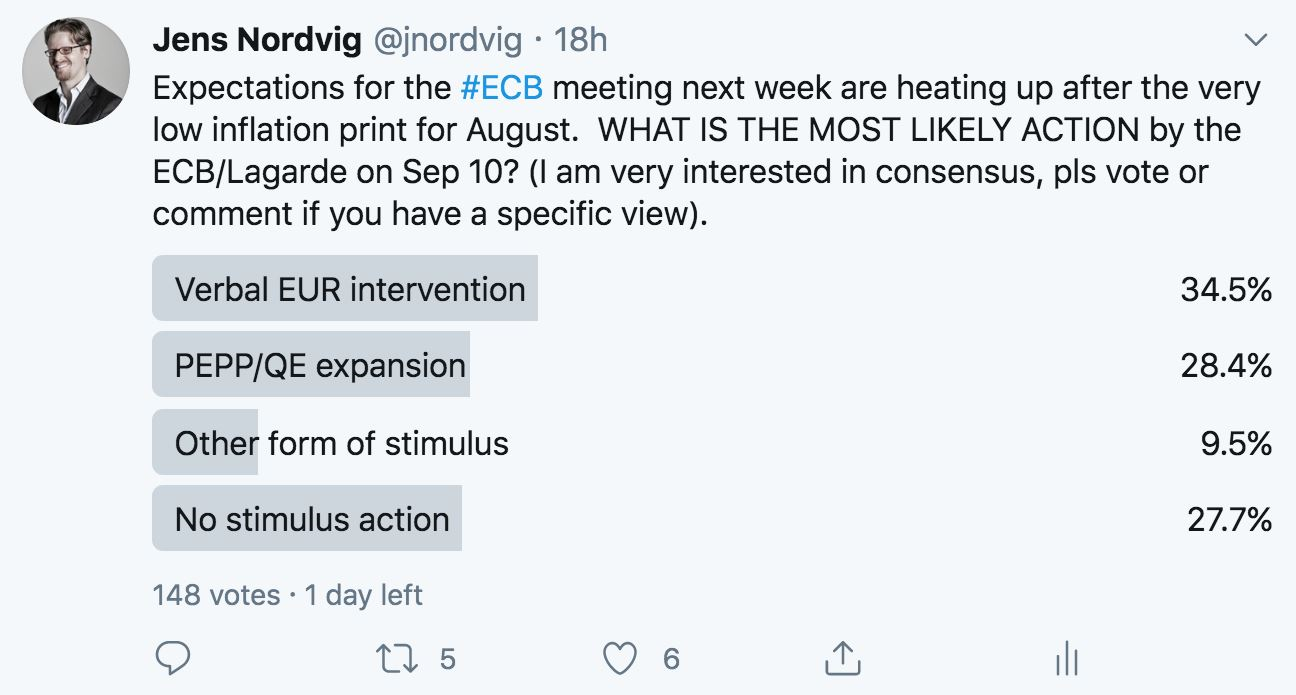 The USD finished higher on the week but it was another wild ride.  Early on, USD was weak — DXY Index broke downside 92.00 support, EUR briefly touched 1.2000, AUD broke topside 0.7400 and GBP traded well above 1.3400. With the move down in US equity indexes later in the week, USD gained back ground. High beta FX AUD, NOK, SEK were negatively impacted the most by the risk-off move.  MXN avoided its usual reaction to risk-off and appreciated despite the weakness in US equity markets (discussed above). EUR ended the week around 1.1835 after briefly dipping below 1.1800. CNH was also strong – see inflows to Chinese debt chart below.

Currency Comments: This week, ECB’s Philip Lane noted that the level of the euro “does matter.”  However, last week, Board member Schnabel noted that dollar weakness is a good as it is a sign of global confidence.  We take these comments as nothing more than common sense rather than a strong push back against recent moves higher in EUR.  The RBA mentioned AUD in its September 1 Statement on the Monetary Policy Decision saying, “the Australian dollar has appreciated, to be around its highest level in nearly two years.” But noted that “The US dollar has depreciated against most currencies over recent months” and that commodity prices were higher.

Foreign inflows into Chinese bonds are accelerating, with July and August figures particularly large. This is a source of support for CNY, and Jens notes, “what happens when yields drop to zero everywhere else.” Jens wrote about the historic shifts in fixed income and currency markets that we are observing in 2020 in his public letter Fixed Income is Dead, Long Live FX. “Institutional investors will have to adapt and be willing to take more risk, and generate returns in global FX; for some, perhaps even via new exposure to Chinese bonds.” (Tweet Jens’ Public Letter). 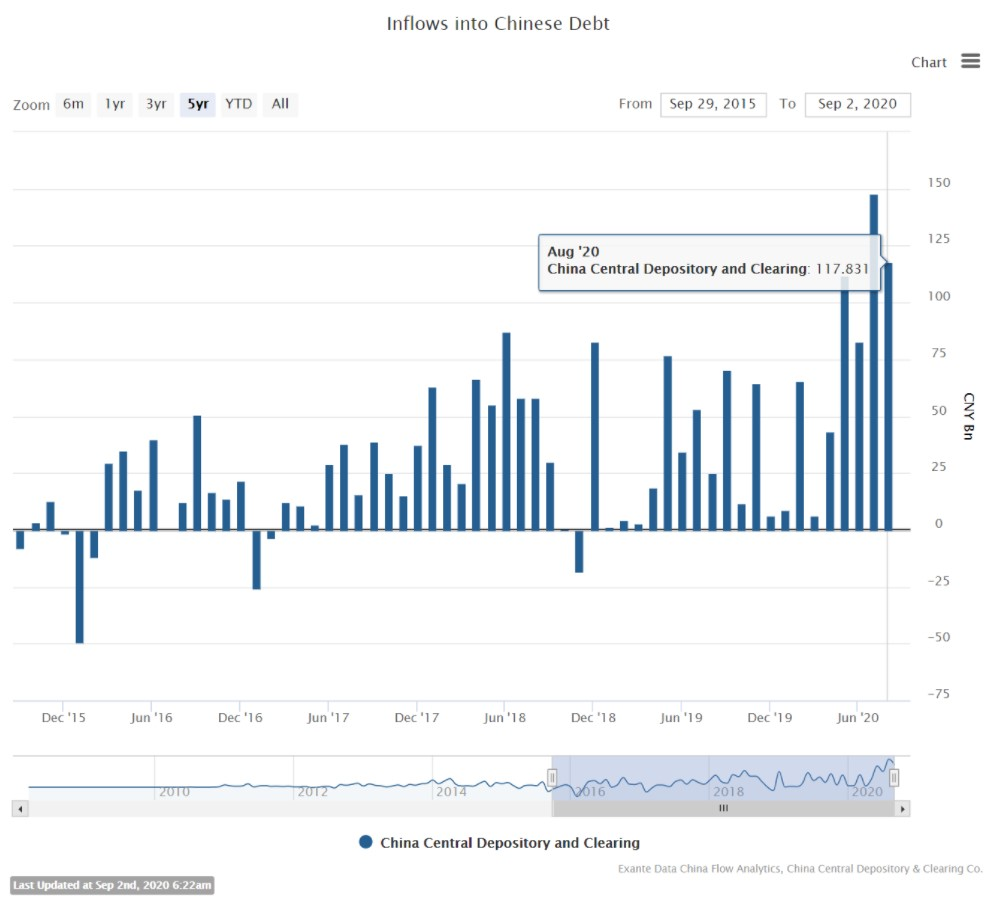 Its the start of September, so we take a look at USD seasonality for the month. Below is our proprietary FX seasonality table from our factor model. USD is weak in September especially vs EM FX. USD is also weak vs G10 FX. The exceptions in G10 –  USD is stronger vs AUD, CAD, JPY. 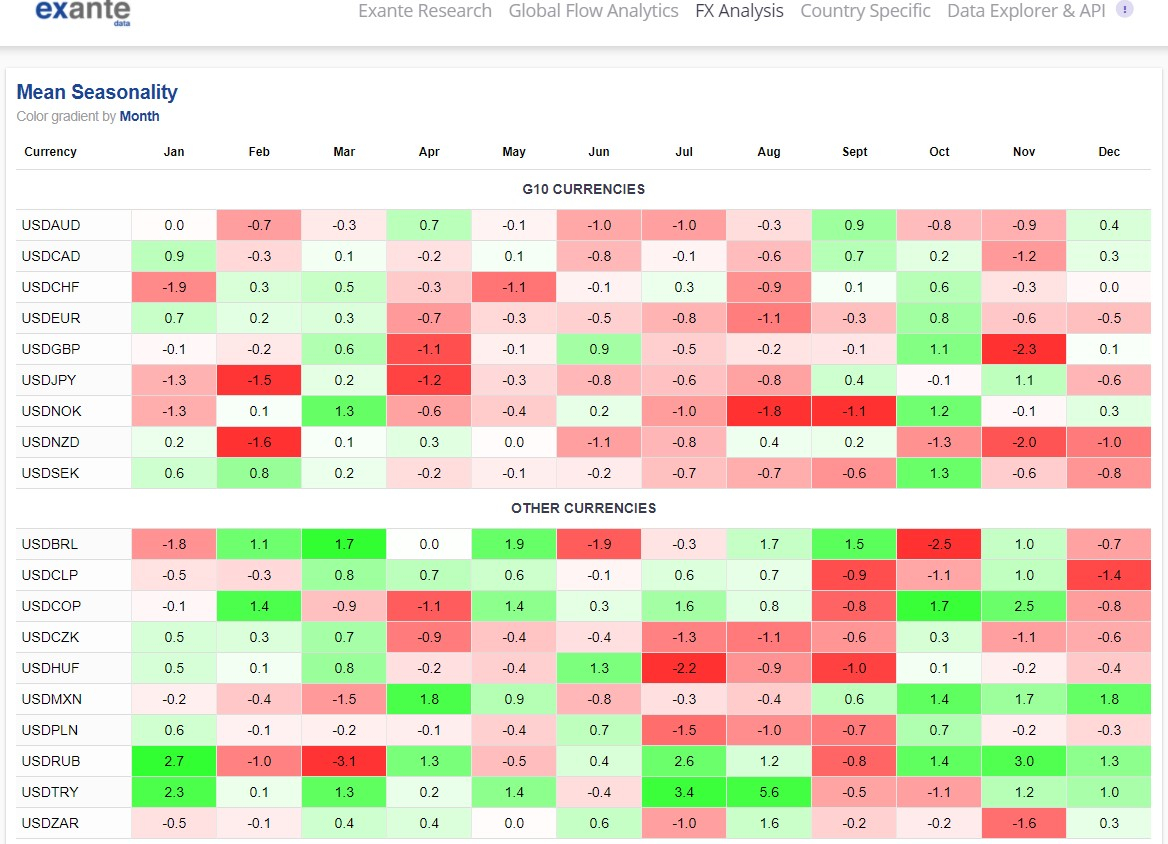 In the US,  moderation persists as a majority of states report daily new coronavirus case growth below 1%.  The chart below depicts our simple framework (bottom-up, based on hospitalizations and dynamic fatality rates), which continues to hold up well in predicting US fatalities a few weeks ahead. We should see some further moderation in September, after being mostly above 1000/day in August. Looking ahead, we will carefully monitor the impact of the Labor Day holiday weekend on the outbreak path, as well as testing and reporting patterns. 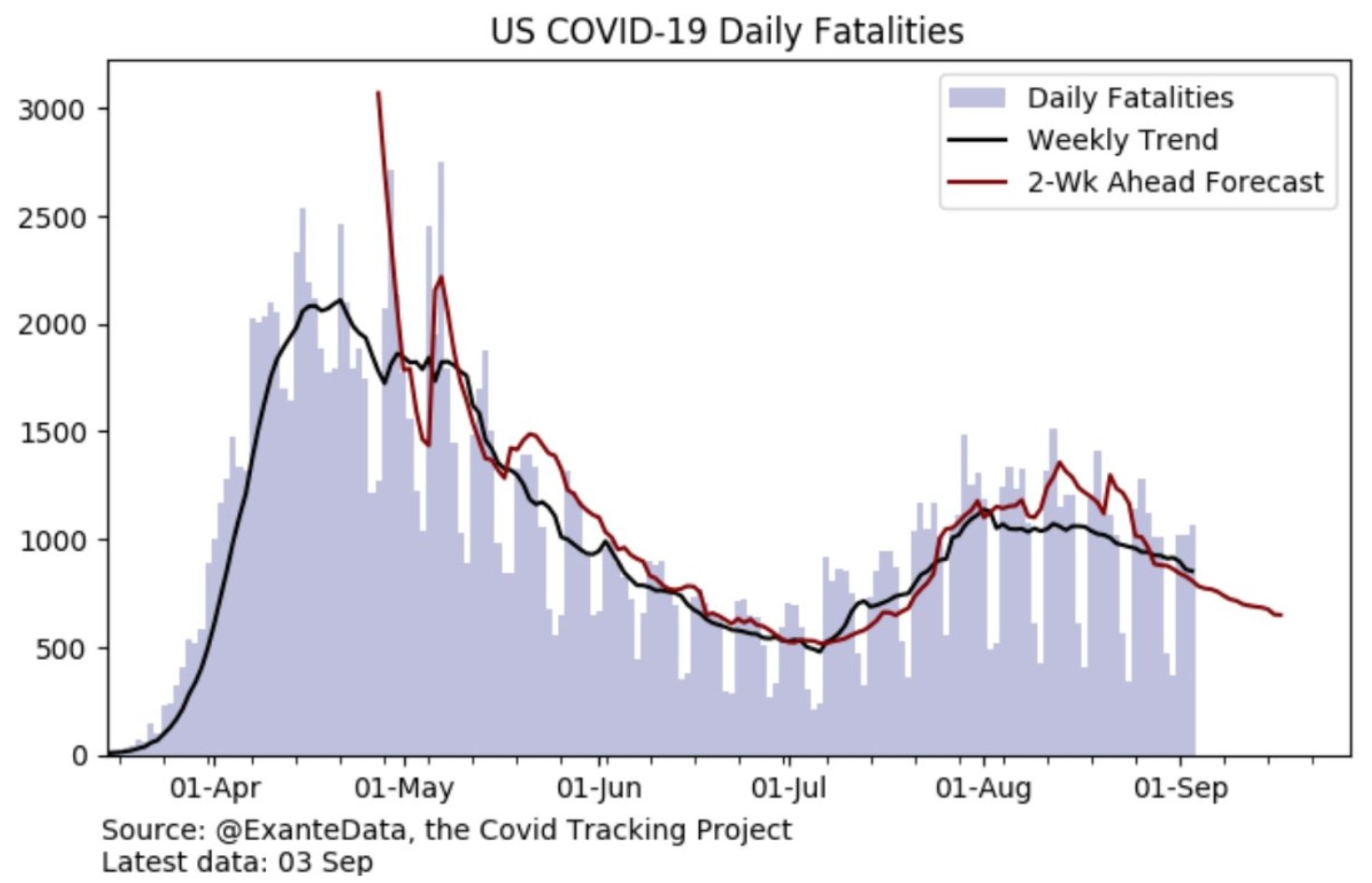 For the Eurozone, case fatality rates are notably lower during the second wave. Although we expect fatality counts to further increase in through September, the incidence will be well contained relative to peaks put in during March and April. 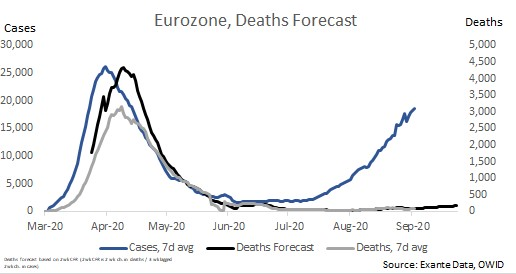 For more information, institutional clients — please reach out to us here.