Tuesday, September 8 was a risk-off day with the S&P 500 down nearly 2.8%.  How did bonds do as a hedge? Better than last week (September 3 also was a notable risk-off day for S&P). See chart – On September 8, 10y yields were down almost 4bp on the day, although not nearly as big a decline as we have seen historically on >2% equity drops (which in the past saw UST yield declines > 8bp on average). 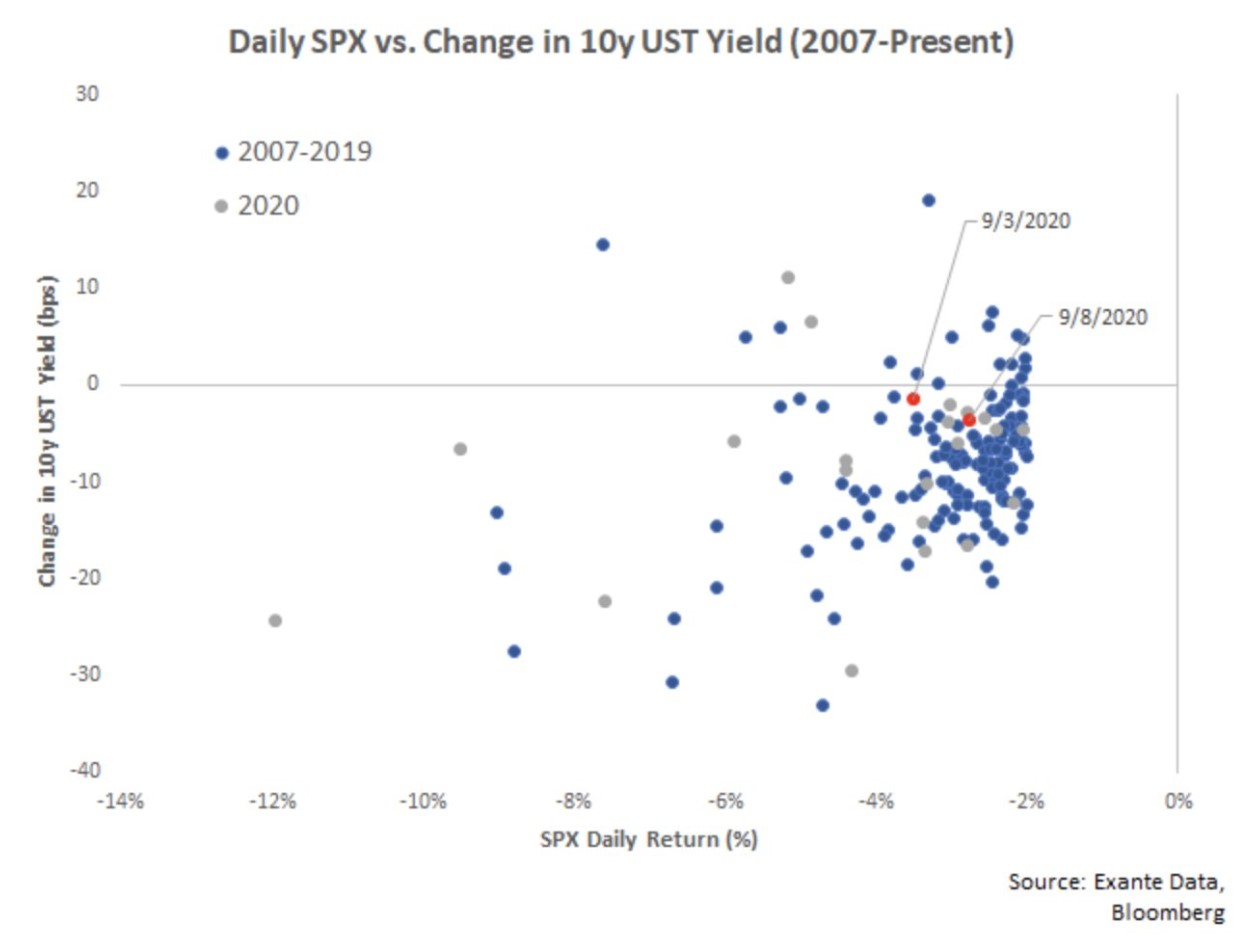 On Wednesday, AstraZeneca announced that its trial on its potential vaccine was paused this week after a participant in the UK became ill. Reuters reports that Astrazeneca should know by year end “whether its experimental vaccine protects people against coronavirus, as long as it is cleared to resume trials soon…”

On Thursday, the ECB announced its monetary decision and held a press conference. The policy measures were left unchanged. Despite some expectations ramping up into Thursday regarding FX verbal intervention (see our survey), Founder Jens Nordvig notes that the comments at the press conference were very  standard: President Lagarde noted that the ECB 1) does not target the FX rate and  2) discussed Euro within GC in the context of price stability. He does not think that these comments amount to  verbal intervention.

Throughout the week, Round 8 of Brexit negotiations took place. Head of Political Risk Analysis Wouter Jongbloed says that “tense doesn’t begin to describe the negotiations.”  News that the UK was considering unilaterally altering commitments it made in the Withdrawal Agreement and openly admitting these plans might be a violation of international law weighed on negotiations. Wouter notes that the Internal Market Bill was introduced to Parliament on Wednesday, September 9th. It would override certain provisions of the Withdrawal Agreement in case the UK failed to secure a deal with the EU by December 31.  The statement by EU Chief Negotiator Barnier following Round 8 of negotiations said while the “EU has shown flexibility…the UK has not engaged in a reciprocal way on fundamental EU principles and interests.” A statement from European Parliament’s UK Co-ordination group said “Should the UK authorities breach – or threaten to breach – the Withdrawal Agreement, through the United Kingdom Internal Market Bill in its current form or in any other way, the European Parliament will, under no circumstances, ratify any agreement between the EU and the UK.” The last round of negotiations (Round 9) is expected September 28 – October 2. Negative headlines throughout the week weighed on GBP (see USD Heatmap section).

Ahead Next Week: select economic releases:

The USD was mixed on the week. The DXY Index spent most of the week trading above and below 93.00 (range (92.70 – 93.65). GBP was the weakest vs USD in our heatmap due to the negative Brexit developments. GBP ended the week sub-1.2800. EURUSD did not display any large sensitivity to Brexit news. The single currency traded above 1.1900 during the ECB press conference. MXN was the strongest this week vs USD on our heatmap, one of the HY EM currencies displaying resilience despite the risk-off environment in US equities. HY EM FX currencies have been lagging in the USD weakening observed since May, but performance has been better in recent weeks. With some risk-off this week, safe haven CHF and JPY had gains while high beta NOK, SEK, NZD, and CAD  declined. 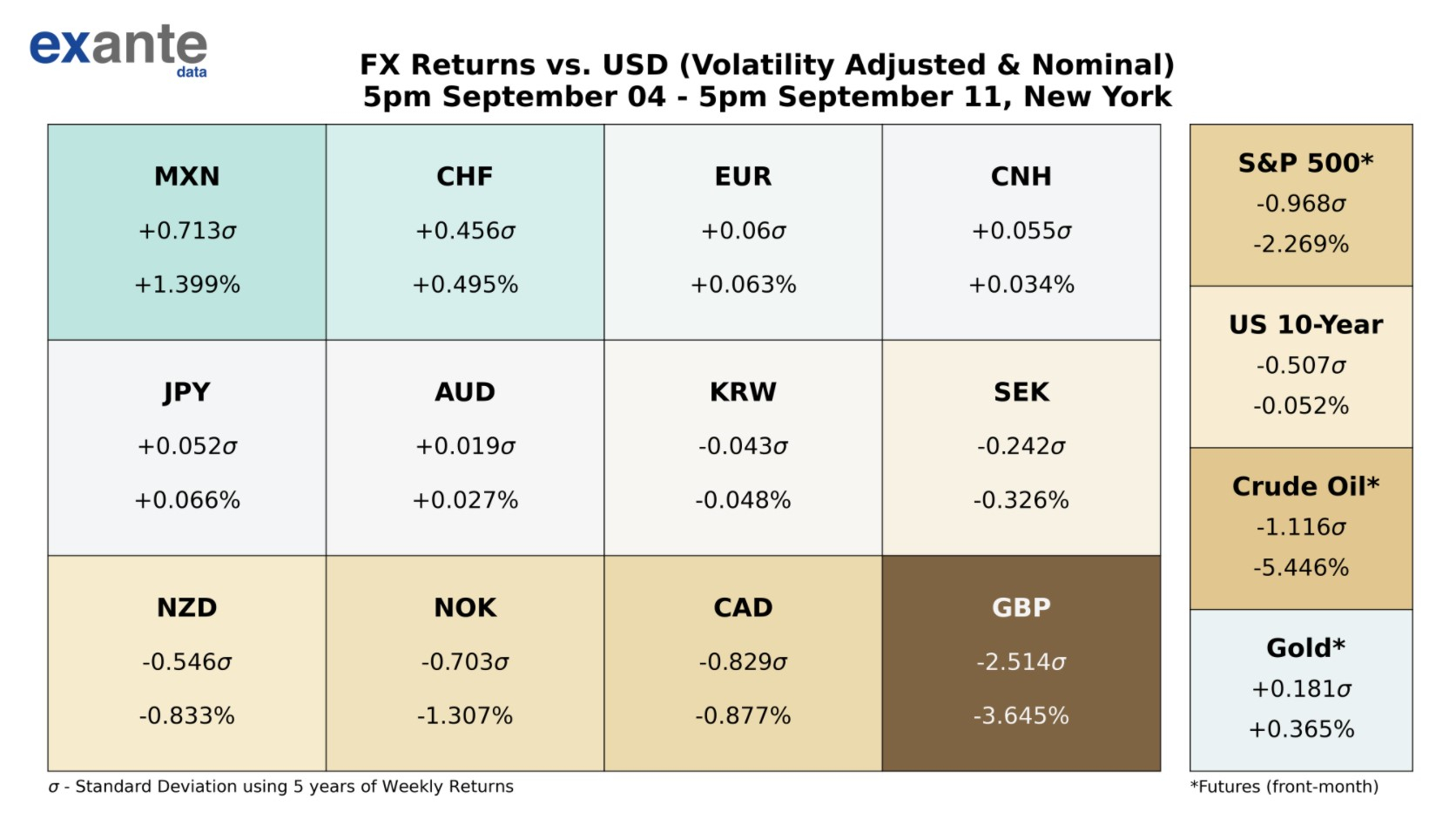 There has been lots of focus on GBP this week, given its decline.  Interestingly, our model of systematic FX traders (CTA) do not point to any elevated short GBP positions in EURGBP. Positions are close to neutral. But the move higher in the cross this past week could trigger pending GBP selling.

The US imported more gold than oil since Covid-19 (Apr-Jul). At $51bn, net gold imports in the period are big enough to shift the level (if not the overall trend) in the US trade deficit. And of course it implies a narrower deficit and larger flows out of USD.  There has been a lot written about the “record” US trade deficit in July that it was large and it is widening. But massive gold imports have been a big contributor.  Most of the demand for gold appears to be a reflection of speculative investment demand and inflows to gold ETFs.

International: Spain and France continue to post increasing case counts, with the UK joining the list of problem countries in Europe this week. While we continue to observe rising case growth in Europe, we maintain that the second wave in the region is not like the first.  Indeed, our forecast for deaths remains subdued, even as cases exceed 15,000 per day. This is due to the stable to falling case fatality ratio which currently stands at 1.5% and continues to converge to the estimated IFR of 0.5%-1.0%.

In the US, moderation in case growth persists. Looking ahead, we will carefully monitor the impact of the Labor Day holiday weekend on the outbreak path, as well as testing and reporting patterns.

Chart: Comparing second waves in the US and Eurozone, our forecast shows very little growth in fatalities over the next few weeks. 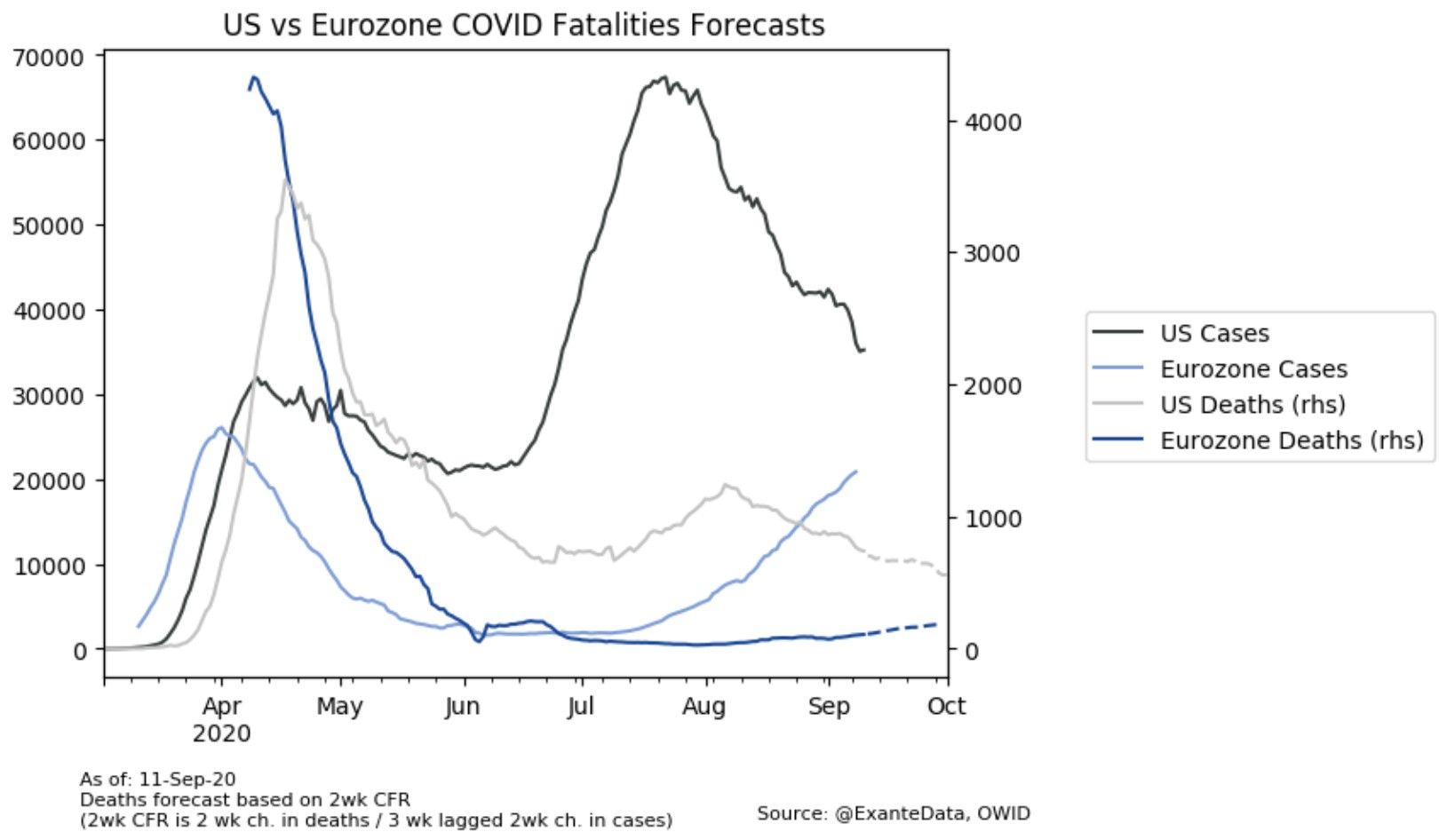 Country Pages:  These take a look at the most important idiosyncratic data points and charts for the individual country. For example, the Turkey Country Page looks at high frequency tracking of the FX balance sheet of the banking sector and Central Bank.

Data Explorer:  With over 70k unique time series in our database, it’s important to be able to find what you’re looking for and even come across series and or/ data relationships you didn’t know existed. To that end we’ve created our Data Explorer with multiple ways of finding the data you want quickly and easily along with helpful functions to get raw series CSVs.

For more information and/or to see a demo, institutional clients — please reach out to us here.

Key members of the Exante team met in a socially distanced way this week for the first time since March. Jens had the following update: “Socially distanced, in-person meetings are possible; and I would argue valuable as we prepare for work-from-home for the long-haul.  The informal interaction, makes the subsequent formal interaction more personal. I strongly believe that occasional in person meetings, if physically possible, can help improve day-to-day (online) communication and effectiveness as we evolve into a steady state form of WFH.”  Jens has chronicled how Exante keeps adapting and moving forward throughout the pandemic –  from what he learned from managing teams remotely (tweet blog) to peak WFH (tweet).