US equity indexes were lower on the week: DJIA -0.9%, S&P 500 -1.5%, NASDAQ -1.5%, due to political uncertainty, disappointing US economic data, and as the market waited for President-elect Joe Biden’s fiscal stimulus plan. Details of the $1.9 trillion plan came late in the week.

On Wednesday, Italy’s coalition government lost its parliamentary majority when former PM Renzi withdrew his support for the government (pulling his party’s ministers from the cabinet). This stemmed from complaints about the Italian Government’s plans to appropriate and attract funds from the NGEU program. Our Head of Political Risk Analysis, Wouter Jongbloed notes:

“…the governing coalition is attempting to navigate the management of fiscal priorities while satisfying political demands to funnel a measure of pork-barrel support to certain constituencies and interests. Considering the fiscal inflows are presently coming from outside Italia (via the EU), the governing coalition partners have no incentive to hand control over to the right-wing opposition.

This sets up a split-screen reality, where the various coalition partners are internally struggling for dominance and jockeying for the best place to ultimately own the narrative around the expected fiscal outlays, while being externally aligned in wishing to avoid new elections until the prospects of one party are clearly favorable (all are vulnerable at present)…In the messy landscape of Italian politics, the prospect of a general election being called at this time is a tail-risk until it is clear that the prospects of a governing coalition member could be served by forcing a return to the ballot box.”

The minutes from the December ECB meeting, at which the ECB expanded the PEPP to EUR1,850BN through at least March 2022, were released.  They confirm the Governing Council (GC) is watching the euro exchange rate, but only as it impacts inflation. While the GC settled on a EUR500 billion boost to the PEPP envelope, there was disagreement on the size of the package. Hence the compromise: “if favorable financing conditions could be maintained with asset purchase flows that did not exhaust the full amount available under the PEPP, the envelope need not be used in full.”

“PEPP is reiterated as the GC’s preferred instrument, meaning further rate cuts are highly unlikely. There was a wide variety of views on the GC about the likely pace of recovery, with the possibility raised that growing household savings will underpin a strong rebound during the summer—though recovery by mid-2022 is in the staff baseline.

On the design of the PEPP instrument, the GC revealed their hand somewhat through the argument that the use of flexibility in PEPP purchases is ‘proportional’ to their monetary policy mandate as required under the EU Treaties. This is a subtle nod to the possibility that capital key will be permanently abandoned as a constraint on asset purchases in the future. This will be a likely outcome of the Strategy Review. If the GC  can abandon capital key and maintain flexibility in purchases, this will institutionalize the ECB’s variant on yield curve control—yet another step by the ECB in mimicking the BOJ. There was some discussion of what it means for the ECB to ensure ‘favorable financing conditions’—that is, whether it implies targeting real yields or nominal. Targeting real yields allows the nominal yield to drift higher with inflation expectations, targeting nominal yields will resemble average inflation targeting. The latter would come close to mimicking the Fed.”

Next week, the ECB meets. Chris notes, “The ECB is unlikely to consider new policy measures for some time still, and the meeting next week is unlikely to be eventful. So long as the virus is ahead of the vaccine, the ECB will remain supportive through asset purchases.”

USD was stronger on the week. Founder Jens Nordvig notes that “the USD gained as risk sentiment deteriorated last week (even as new stimulus was announced). But USD gains were very uneven. The euro was at the center of the weakness, after a big run, with few hiccups since May.” EURUSD ranged 1.2220 – 1.2074, with the low coming on Friday. As the euro is the DXY Index’s largest component, the DXY rose to 90.8 also on Friday. GBPUSD ranged 1.3455-1.3698. Higher beta currencies were negatively impacted vs. USD on the deteriorating risk seeking sentiment/decline in US equity indexes. SEK was weak, with most of the  move happening on Wednesday when the Riksbank announced that it decided to revamp its foreign reserve program. We highlight the possibility of interventions by the Riksbank to cap the upside for the SEK in light of what would likely be appreciation due to the positive distribution of the vaccine in coming months, which would lessen the markets fear of the pandemic and boost global growth sentiment. 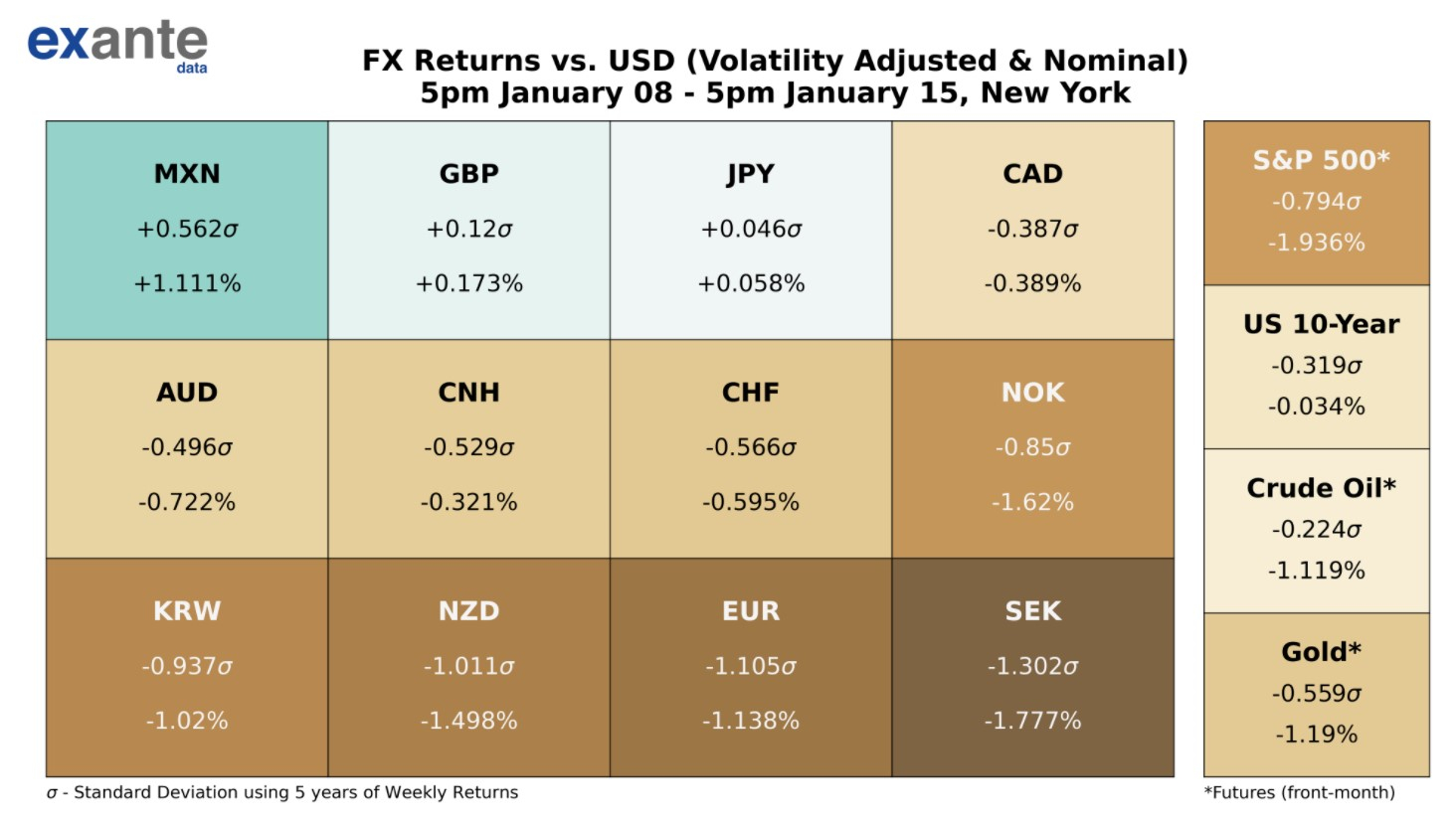 International: A new variant of Covid originating in Brazil was found in Japan. See thread on this here. Turning to Europe, Covid case momentum there is mixed. Belgium, Netherlands and (maybe) Poland seem to be on stable trajectories. However, many countries that saw a decline in cases in Q4 are now seeing a sharp reacceleration such as Spain, the Czech Republic, while Ireland and the UK are a bit farther along on this curve.  Both the UK and Ireland had important growth in cases starting in mid-to late December, likely at least partly due to the new UK strain. Yet, momentum in both countries looks better in the last week (particularly in the UK – see charts below). Our outlook on the UK is cautiously optimistic, as it leads the region in vaccinations. In other news, the UK will temporarily close all travel corridors from Monday morning to prevent the risk of new Covid strains, even those undiscovered, from entering the country.

Meanwhile France, Italy and Germany are at critical junctures with momentum starting to look problematic again. Whether this reacceleration reflects the impact of new more contagious strains, premature easing of restrictions in Q4, holiday effects or lockdown fatigue is difficult to disentangle (likely all of the above).  See our charts of daily Covid cases in most affected countries here.

US: US cases regionally may have peaked, though this also depends on the spread of the new more highly transmittable UK variant found in the US and the pace of vaccination. However, unfortunately, fatalities (which lag) have not – see charts below. Our forecast shows that the South region will have 1409 fatalities by February 5. The CDC reports for the latest data that 31.1 million vaccine doses have been distributed in the US and 12.2 million doses have been administered.

There are some notable hotspots: The Los Angeles Times reports that one in three LA county residents has been infected with Covid. See our Twitter thread on California and Covid here. Arizona Covid hospital pressure is >700/million, where only NY and NJ have been before (in the first wave). Since case counts are still accelerating and policy is mostly unchanged there, further deterioration seems the most likely. See our current hospitalization chart and local Arizona news coverage here. See this infographic for the US 100 worst counties in terms of weekly new Covid cases per capita. 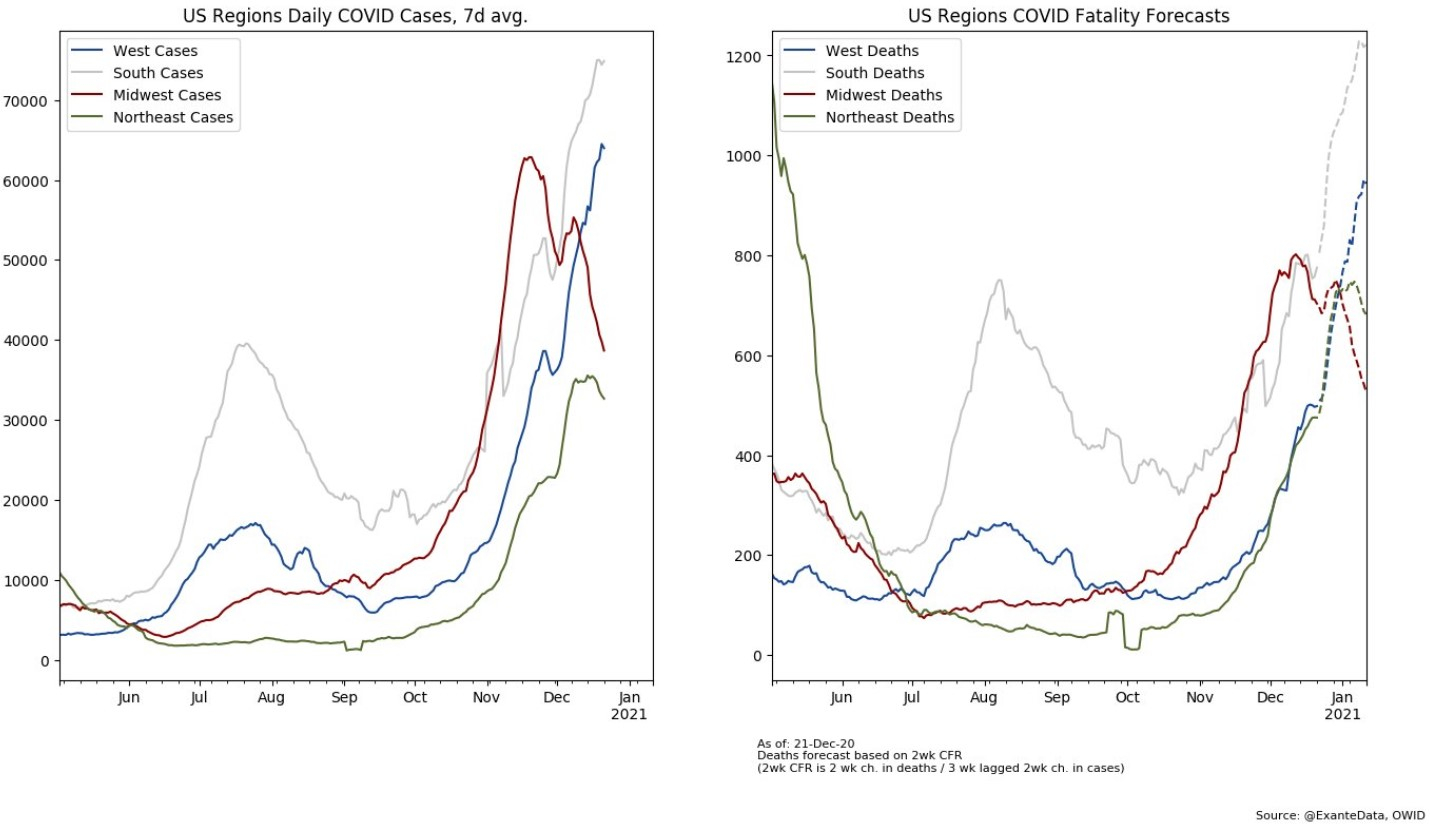 Exante Data got a mention in this WSJ article by Mike Bird: The Dollar’s Decline in Global Reserves: Fact or Fiction?  Senior Strategist Alex Etra shows some updated charts on the USD reserve status in this twitter thread.

Alex also wrote our latest Substack blog: 2020 UST March Madness. “Were non-banks or foreign investors to blame for dysfunction in UST markets in March 2020? For policy-makers and investors, getting the answer right could be key to weathering the next ‘perfect storm’.”

Head of Asia Pacific published a Substack blog on January 10: Sustainability Reporting is a Copernican Revolution for Global Financial Markets.    “Sustainability reporting is coming of age. It will fundamentally reshape global financial markets, and even society at large.”