US equity indexes were mixed on the week: DJIA +1.8%, S&P 500 +0.8%, NASDAQ -2.1%. Re-opening optimism is unsettling the market. The US vaccine supply timetable has been brought forward (see Covid section), February payrolls surprised to the upside, and more fiscal stimulus is expected – supporting risk seeking. However, inflation fears are causing US yields to rise quickly, weighing on risk seeking sentiment at times and especially technology stocks as evidenced by the fall in Nasdaq this week. On Thursday, the US equity sell-off intensified intra-day and Treasury yields rose as Fed Chair Powell spoke. Powell stressed that it was likely inflation would rise this year due to base and reopening effects, which the FOMC would view as transient. Powell said that the Fed’s current policy stance was appropriate and did not signal that the Fed was about to increase monthly long-term Treasury purchases to contain yields. Founder Jens Nordvig conducted a poll pre-Powell’s comments, asking “What is consensus on Operation Twist by the Fed”. Jens notes, “The Fed is in a tricky spot. The macro news is good, but the curve is moving (too) fast. They do not want to micro manage, but can they go full-out laissez faire?” See poll results here.

Thursday also saw oil rally to its highest in over a year as OPEC and its allies agreed to keep production unchanged into April. The strength in oil prices supports the terms of trade for oil exporters. This is visible in our Trade Balance Nowcast (below) which shows the expected change in the current account balance to GDP over the next 12 months as a function of changes in commodity prices. Norway, Russia, and Canada are getting a boost from oil prices – which could have positive implications for their currencies.  See this chart (from our FX factor model) of betas of various currency crosses from a 1 standard deviation (weekly) move in oil prices.

Turning to Europe, here are notes from Senior Advisor Chris Marsh: “Last week was relatively quiet for the ECB as the next policy meeting approaches. Net asset purchases (week ended 26th Feb) appeared on the low side at EUR13.7bn, a week when global fixed income came under pressure. The number was distorted, however, by reporting lags—it takes 2 days for purchases to clear—and redemptions of EUR9.7bn. This is not a signal of ECB intent. Curiously, about 40% of net purchases  were German assets held by the Bundesbank—well above capital key, and a sign of growing focus on holding down Bund yields than acting on peripheral spreads.”
“If last week was about Powell’s communication of the Fed’s intentions, next week will be all about Christine Lagarde. There are two things to watch. First, revised staff forecasts after the stronger-than-anticipated HICP print in January—how high do they foresee core and headline inflation at end-year and in 2023? Second, how will the ECB’s Governing Council define and communicate their concept of favourable financing conditions in the context of PEPP purchases and the global fixed income sell-off. This represents a crucial communication challenge only a day before the anniversary of  Lagarde’s ‘we are not here to close spreads’ remark. The danger of miscommunication next week is as possible next week as it was last March.“ 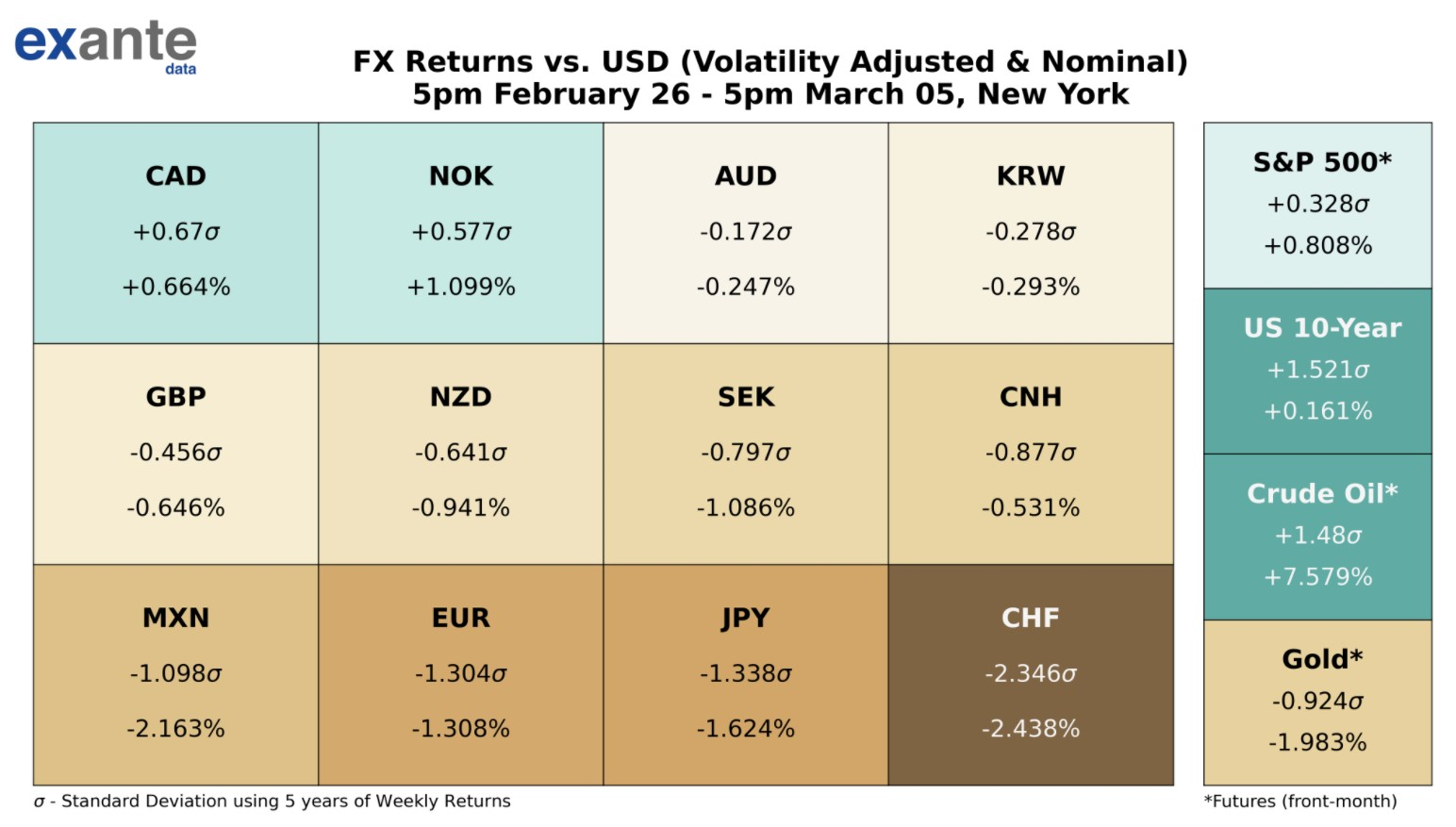 At the UK coronavirus press conference Friday morning, Health Secretary Matt Hancock, announced that over 20 million people in the UK have been vaccinated. He went on to say that every adult will be offered a vaccine by the end of July. In the UK (focusing on England data), hospitalization rates among the older do show signs of vaccine impacts with the hospitalization rate among the 85+ cohort dropping (chart left). However, there are some concerning signs as hospitalization rates among the younger populations increases, likely due to the UK strain. Monday, March 8 commences Step 1 of the UK’s roadmap to reopening. Schools and colleges will open for all students.

Europe, particularly Central and Southern Europe continue to concern us with the Czech Republic clearly seeing important case increases as daily cases per million reach 90% of peak levels. Momentum in Italy and the other Central European countries is also problematic. It illustrates that relaxing restrictions will not be easy in Europe, where the UK strain is now dominant in most countries.

We highlight Brazil, which has seen a fresh spike in cases over the past month (from a not low level) and disturbingly, the fatality rate is going up too (chart right).  This is a reminder that the vaccine roll-out is not progressed enough to make a clear difference yet in many countries. And it is also a reminder that new strains, such as the Brazil strain entail fresh uncertainty.

Turning to the US, there has been a small change in momentum but with cases so low relative to prior peaks, it is hard to be too concerned.  Hospitalization and fatality rates are not yet showing any notable decreases from vaccinations. We note that some states like Florida and Texas are currently at case levels comparable with Italy, Poland and Brazil. Hence, they should be watched for final spikes, as restrictions are relaxed, and vaccinations not prevalent enough to provide broad immunity.  The US has administered 85 million vaccines.  This week, President Biden said that there will be a vaccine available for every adult American by the end of May.

We are pleased to announce a new tool for clients on our data and analytics platform: The FX Range Projection Tool. It examines seasonal variation in FX performance and volatility. Users can see the historical average performance and volatility for most EM and G10 crosses by month and year and compare this to current/recent FX performance.  The goal of this tool is to assist in picking entry and exit points for trades, based on the size of moves realized historically.

Special Advisor Tor  Vollalokken was quoted in this Quartz article:

Why the Norwegian krone could be the world’s first global currency.  “There are already signs that the krone is more responsive to investments in the fund rather than the Norwegian economy, Vollalokken said.” Tor also published a Substack blog on this subject: The Norwegian Krone is becoming a “global” currency (Part I).

Advisor Amelia Bourdeau appeared on TD Ameritrade Network on March 1st talking: inflation, US yield curve, US dollar, and Exante Data’s forecast on when the US will reach herd immunity.