This was another headline driven week. US President Trump was released from the hospital on Monday. The VP debate took place on Wednesday between Senator Kamala Harris and VP Mike Pence at which a fly captivated the nation’s attention.  President Trump called off the fiscal stimulus negotiations, but then reversed course – wanting a smaller fiscal package and then again calling for a larger one. The FBI thwarted a plot by two militia groups to kidnap Michigan Governor Whitmer. The October 15th Presidential debate went virtual, but then President Trump announced he would not participate, so it was cancelled. (See how betting odds on the US Presidential Election from PredictIt shifted over the week – PredictIt section below).

In the meantime, investors monitored back and forth headlines about the prospect for near-term fiscal stimulus in the US, Europe and UK announced more restrictions aimed at stopping the rising COVID-19 case counts, while the US loosened some. ECB minutes were released.

On ECB Minutes, Senior Advisor, Chris Marsh notes that the ECB’s accounts of the Sept policy meeting paint a picture of a more dovish and pro-active Governing Council in contrast to the press conference. There was clear concern that risks were tilted to the downside and that inflation was still projected below target in 2022. There was a need to keep open the option of more policy action — they are watching incoming data closely, and they should be ready to adjust any of their tools appropriately (meaning rate cuts/TLTRO adjustment as well or instead of as PEPP).  Here are some key quotes from the minutes: The balance of risks were still “tilted to the downside. While the NGEU recovery plan was a positive development, uncertainty about the evolution of the ongoing COVID-19 pandemic and the potential materialization of adverse real-financial feedback loops called for vigilance.”

Interested in our weekly central bank balance sheet updates from Chris? You can find them here: ECB Q-end, Bank of Japan.

With the gains in US equities, the USD remained on its backfoot this week.  The DXY Index ranged 93.88 – 93.00 (at the week’s end). The ‘big fix’ for CNY after the Golden Week holiday came in lower than expected. CNH gained on the week. Higher beta NOK, SEK, AUD, and CAD gained. Canada had a strong September employment report. NZD gained less than its commodity FX cohorts due to  RBNZ’s dovish tones. Ahead Saturday, October 17 is the NZ General Election. There were equity inflows into Korea this week.  Shifting US election probabilities and US equities rising helped MXN gain this week. EURUSD ranged 1.1711- 1.1829. GBP ranged 1.2852-1.3045. October 15 is UK PM’s self-imposed Brexit deadline and Oct 15-16 is a European Council Summit. 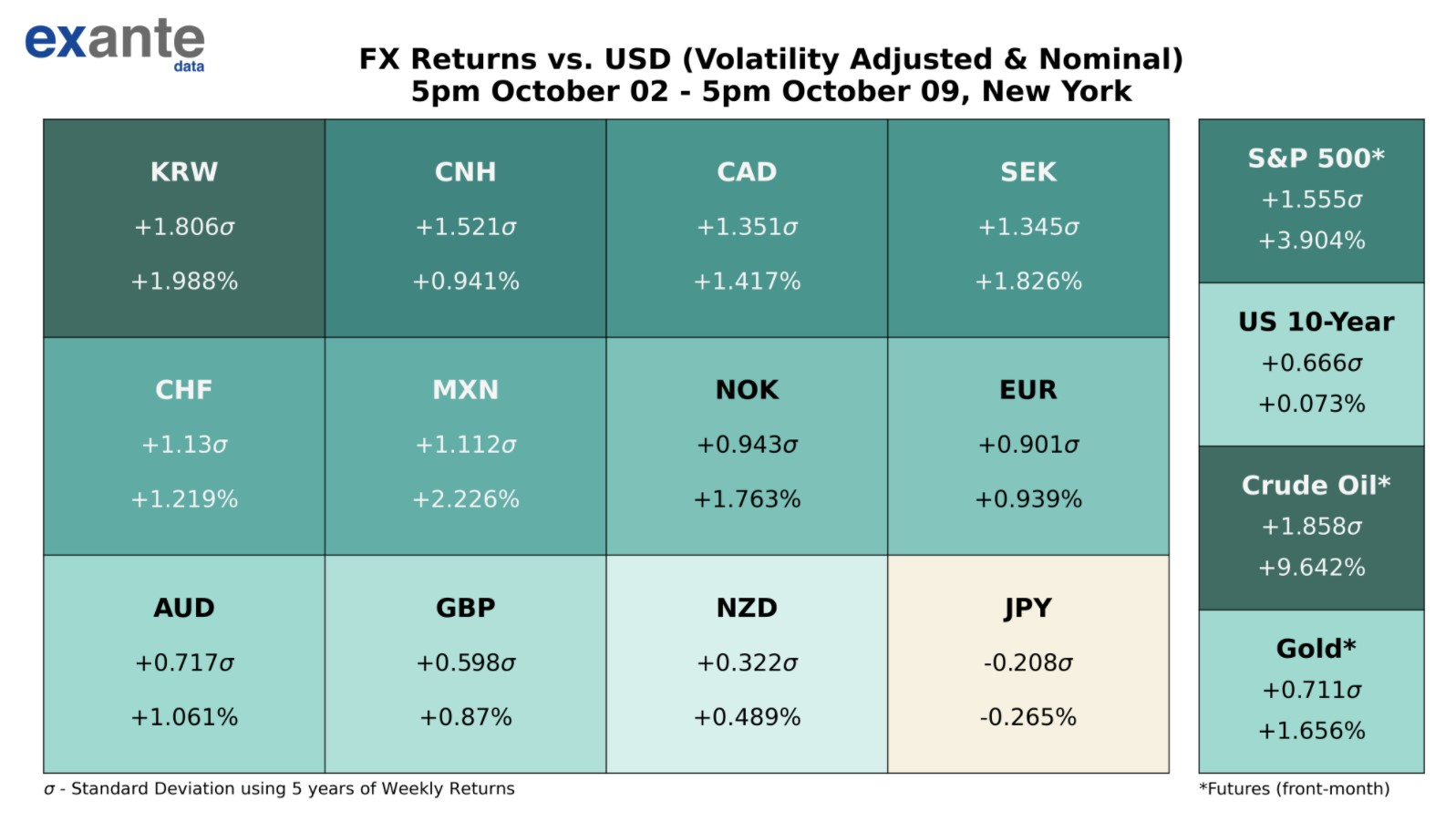 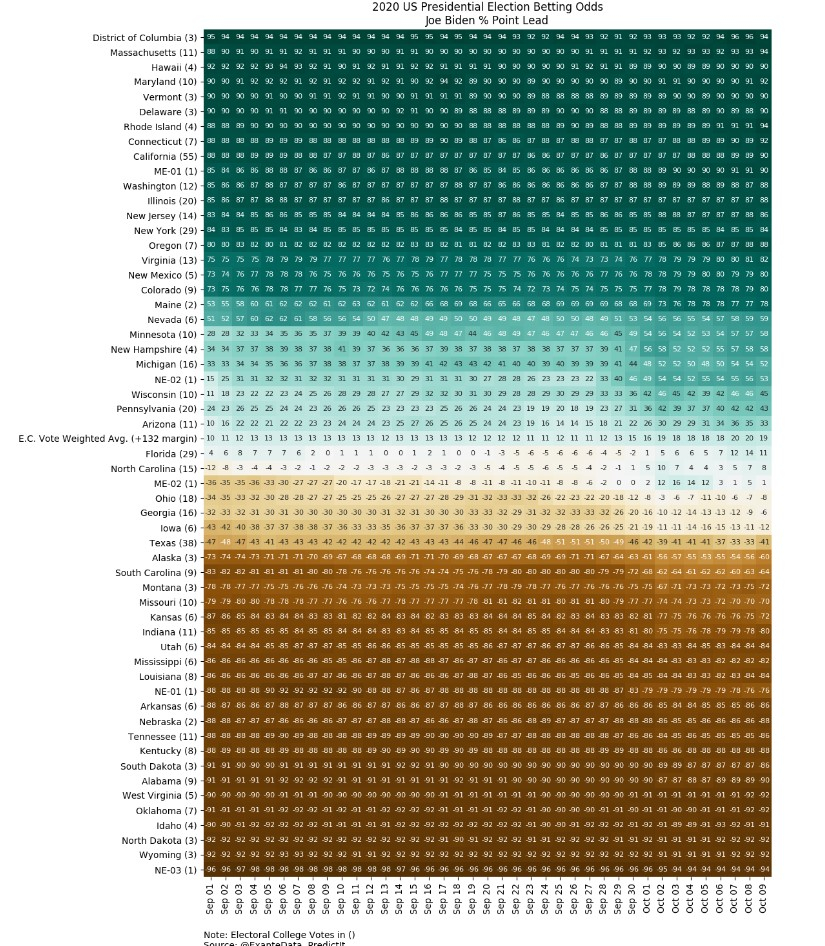 The chart below shows New Job Postings Online, Y/Y% for US states with the largest economies.  After turning down in September, online jobs postings are slowly turning up again. Illinois is doing better than the national figure. Florida and Texas are keeping pace with it.  Performing below the national figure are California and New York. 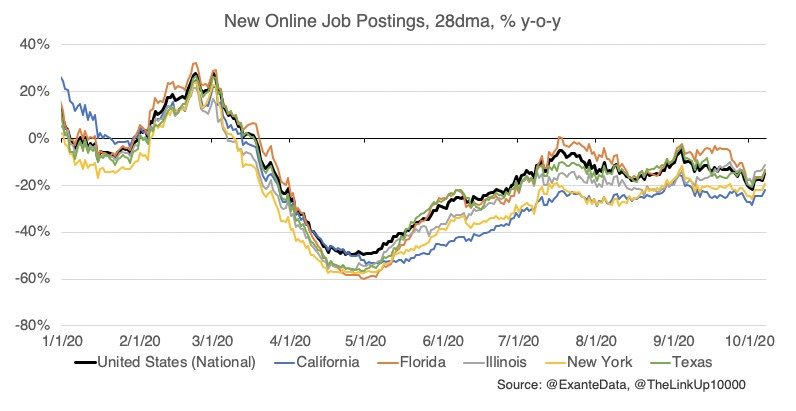 International: Trends in Europe are turning mixed. We have pretty clear improvement in Spain, consistent with the lag from policy tightening. But growth is accelerating in the UK (2.6%), the Netherlands (3.1%) and the Czech Republic (4.7%), while France is stabilizing at a high growth of around 2%. We continue to expect key countries to see results of policy tightening by mid-October, but the list of problem countries is growing.

US:  Trends remain stable in most US states, with growth rates in the 0.3-1.0% range. But certain Northern states are seeing rising growth, with Montana, Wyoming and North Dakota the clearest examples (now up to 2-3%). Wisconsin stands out for concern, with case growth in the state trending at 1.7% per day and testing hit ratios near 20%. Our heatmap here shows the trend of daily growth in confirmed coronavirus cases among US states, along with the trend of daily testing hit ratios.

Chart below looks at hospitalization data in the per capita space, we see that the Czech Republic is now tracking at around 200 hospitalized for COVID per million population. Czech Republic notably stands out as the first European country we see to exceed the hospitalizations it saw in the first wave of the outbreak.  Hospital pressure there is now exceeding current levels in Texas, which are tracking much lower than their peaks around 400 per million. Assuming the trend in Spain continues, hospital pressure during the second wave there reached half of the peak levels seen by France and Belgium at their worst. 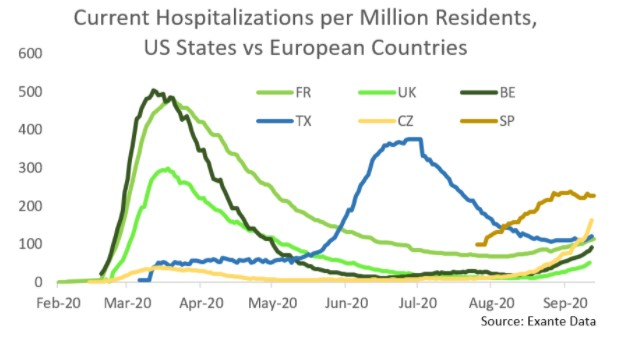 Encore presentation: Jens joined @thalesians recently to talk “Forecasting USD using capital flow data.” In this presentation, Jens demonstrates some of Exante Data’s proprietary charts and analytics – it is a good sneak peak into some of our data and analytical tools available only to clients. You can watch the presentation here.

Founder Jens Nordvig reaches 10k followers on Twitter.  In this thread, Jens thanks his followers and gives his thoughts on why Twitter is useful, how he uses it, and insights he has gained in the process. “It has also been a great help to use the ‘robotic feeds’ we now have on @ExanteData. I use them to absorb more information myself, and I push them to @jnordvig when I think there is something especially interesting. It is a way to come up with fresh perspectives, from raw data.”

Bloomberg users – you can view Exante Data tweets on the terminal. We update charts and commentary daily there.  Users can type into the blue command line: TWEETS BY EXANTE <GO>. Alternatively, to add to Launchpad:  1. Run SOCI <GO> 2. Type into the orange box Exante 3. Select the handle at the bottom “TWT_EXANTEDATA” 4. Click the white LLP <GO> to Open in Launchpad to view in Launchpad mode 5. To save the search >>> Click Actions in the top red tool bar >> Save Search

Head of Asia Pacific Grant Wilson wrote an opinion column for the Australia Financial Review: The Northern Territory must not lose its voice. “Absent a response from the Morrison government, the Northern Territory is set to lose one of its two seats in the federal parliament at the next election. This would further disenfranchise our Indigenous community.”

To receive our Week In Review every Saturday, sign up here.