Week In Review:  Further to Run & Russian Around

US equity indexes were slightly up on the week: DJIA +0.7%, S&P 500 +0.6%, NASDAQ  +0.5%. On Friday, equity indexes rose on a solid but not “too strong” May US payrolls report, which came in at +559k – somewhat below the consensus expectation. The US 10-year yield dipped post the release. Meanwhile, volatile trading in meme stocks continued this week.  On Saturday, it was announced that the G7 finance ministers agreed to a global minimum tax of at least 15%. See quick reaction from Founder Jens Nordvig here and here.

Further to Run: June 2nd was global running day. So it is fitting that this week we continue to look at mobility data. The chart below shows how global mobility has improved from its local bottom in February this year, though the pace of improvement has been slower lately (with deterioration in Asia influencing the global trend). Based on extrapolating current vaccine rates, the Exante Data Team found that mobility will be back to ‘normal’ by the end of November.  Based on incorporating the ‘reverse cliff’ effect for vaccine supply (see WIR May 7th, Covid section), normalization can be achieved by October. So, the recovery in global mobility has substantially further to run.

Turning to central banks, Senior Advisor Chris Marsh has some thoughts about the upcoming ECB meeting: “The ECB’s June meeting will revisit their Pandemic Emergency Purchase Program (PEPP) purchase pace through ‘a thorough assessment of financing conditions and the inflation outlook, … informed by the new … staff macroeconomic projections.’ The outlook has continued to improve since March—when forecasts did not incorporate the Biden Plan—with very strong soft data, growing price pressures, and medium-term risks to the outlook turning positive. Revised forecasts will likely move forward the period when the economy returns to the pre-pandemic level (at least one quarter from 2022Q2) and to revise up 2021 HICP and 2023 Core HICP.  To maintain the (difficult) consensus on the Governing Council, Lagarde will likely affect a ‘stealth taper’ where they commit to continue the current policy stance but allow lower average purchases through the quarter ahead. Perhaps the most important outcome would be to avoid creating quarterly ‘taper’ risk by not pre-committing to the next update.”
Chart: PEPP flows (4 week sum, EUR billions) 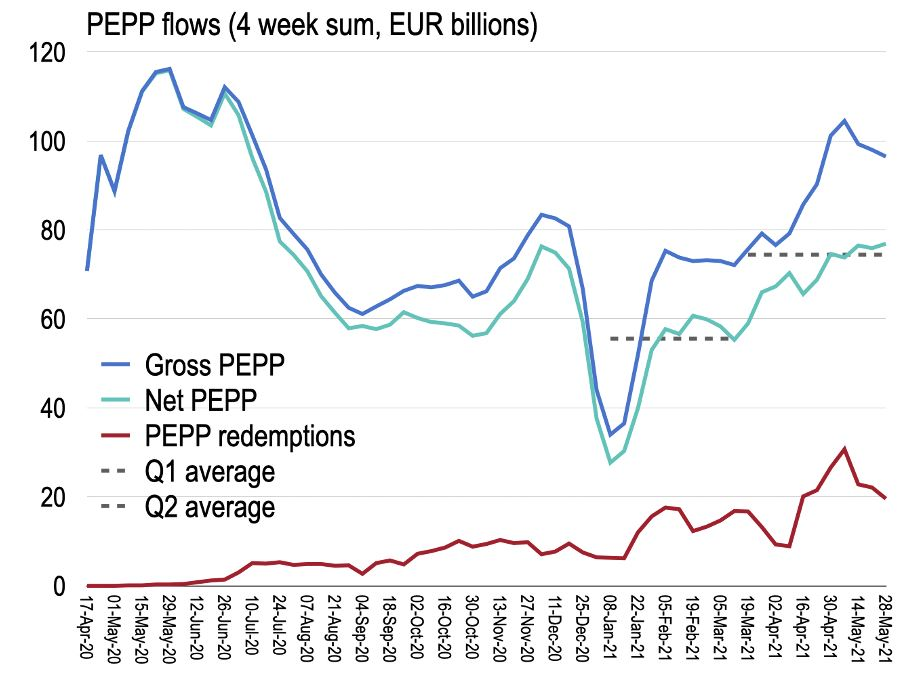 USD was mostly flat on the week. The DXY Index ranged 89.68-90.61, ending the week at 90.13 right above key 90.00 support. The USD’s near-neutral performance was in line with muted moves in US equities. Indeed, the Dollar moves have been largely in line with the risk asset signal in recent weeks. EURUSD ranged 1.2250-1.2104, ending the week lower. Within G10 FX, NOK and JPY were the best performers vs. USD and NZD was the worst performer.

Russian Around: News this week was released that the Russian National Wealth Fund (NWF) will cut its holdings of USD (estimated ~$40bn) to zero and add to its allocations of EUR, RMB and gold continues a trend of Russian “de-dollarization” that began in 2014 following the war in Ukraine and picked up pace in 2018 with the diversification of CBR reserves. The chart below shows CBR official reserve allocations, which are disclosed quarterly with a 2 quarter lag (latest Q3 2020). The USD allocation declined from 43.7% in Q1 2018 to 21.8% in Q2 while the EUR and CNY share rose from 22.2% to 32% and 5% to 14.7% respectively. Senior Strategist Alex Etra notes, “It is possible that Russian de-dollarization of the National Wealth Fund contributed to moves in EURUSD and USDCNY over April/May. But the flow data currently available is not conclusive at this point.” 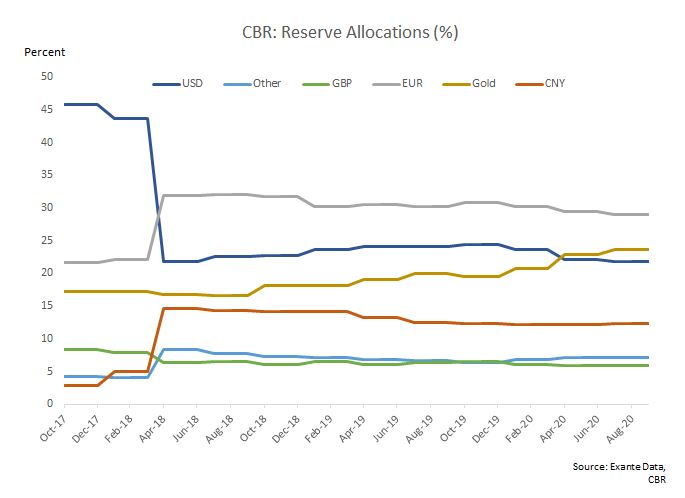 US: On Thursday, the US announced its framework for sharing at least 80 million U.S. vaccine doses globally by the end of June and the plan for the first 25 million doses.

UK:  A renewed Covid outbreak in the UK due to the India variant (relabeled the “delta variant” by the WHO)  has the potential to delay the lifting of remaining COVID restrictions on June 21st. But so far there has been no clear market reaction. Ultimately, we think reopening will continue as planned but local lockdowns will remain a tool to control the new variant while the vaccine program is completed. See the UK’s continued improvement in mobility here.  Starting with the big picture, cases are growing in the UK at about 40% w/w, and the UK is now an outlier vs the rest of Europe, although cases are still <10% of the peak (chart below).

Vaccination rates: The speed of vaccination in the EU has been stable in the last few weeks, though there was a slight increase at the start of the week. France, Germany and Spain saw doses administered jump. With the exception of the US, which is trending lower, vaccination momentum among major economies has either been stable or increasing in the last week. China, Bahrain, Chile and Korea have seen the most notable increases. In major EMs, vaccine roll-outs have seen setbacks in most places; India and South Africa are the only two economies that have seen slight increases in doses administered in the last week. 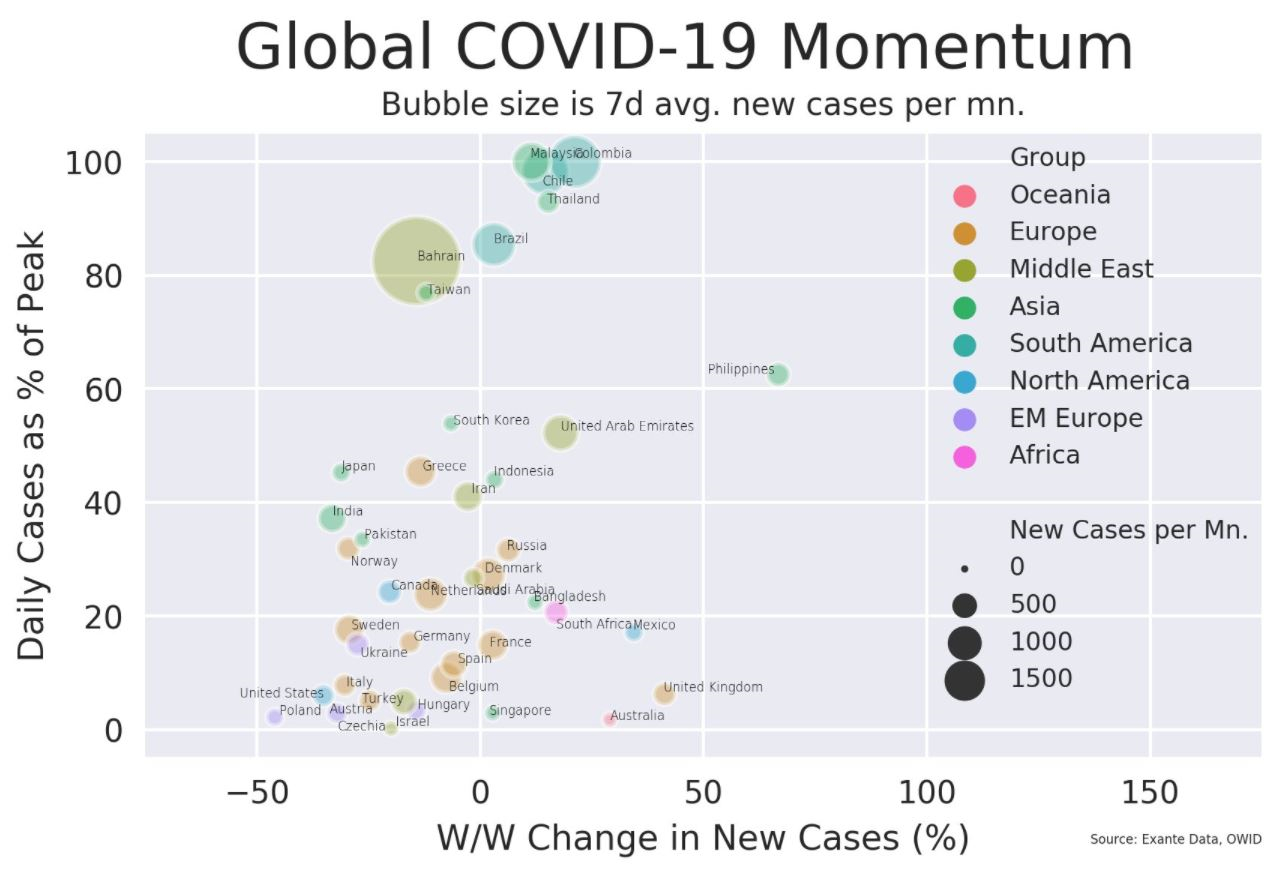 Senior Strategist Alex Etra’s work was referenced in WSJ’s  A Rising Yuan Sets the Stage for More China-U.S. Currency Friction, which also links to our Substack blog.  “Alex Etra, senior strategist at Exante Data and a former Federal Reserve economist has noted that the two segments of the balance of payments align well with the accumulation of banks’ net foreign assets. And the Chinese central bank has long relied on state banks to intervene in the currency market, avoiding doing the heavy lifting, and the outright attention that would bring.”

Exante Data’s G4 Mobility chart on Retail and Recreation Patronage was featured in the Bloomberg article: China’s Inflation Could Be the World’s Problem in the section about the upcoming Olympic Games in Japan. “Judging by Google’s information, charted here by Exante Data, Japanese use of retail and recreation facilities is as low as it has been in 12 months…For a long time, it looked as though Japan would be the ideal venue for a classic games…Now, just as the games are about to start, that is no longer the case.”

We held a client video call on “The Future ECB” with guest speaker Francesco Papadia, Senior Fellow at Brugel. Check out his most recent co-edited book, which  looks at the economic cultural origins of the euro project –  The Value of Money.

*The Week In Review is on hiatus next week and will resume Saturday, June 19th.*