Senior Advisor, Chris Marsh’s, notes on the Federal Reserve:  “The decision on the margins of the FOMC meeting last week to instruct the FRBNY to increase counterparty limits on ON RRP from USD30bn to USD80bn was likely preparation for SLR relief expiry. They are setting up for disintermediation of savings from banks to MMMFs, if needed, alongside drawdown of the Treasury General Account (TGA). Financial plumbing in the US remains crucial for markets at an exceptional time for US fiscal policy. TGA fell to USD1,063bn on Thursday, the lowest level for 11 months and a sign that stimulus checks have begun to flow, raising bank reserves at the Fed to new highs. SLR treatment of bank reserves remains a live issue, however. The Fed also announced a period of public consultation on potential modifications, noting ‘the Board may need to address the current design and calibration of the SLR over time to prevent strains from developing that could both constrain economic growth and undermine financial stability.’ “
Is it 2013 again? The US yield curve is in the middle of a historic repricing, and the move over the last two months in the 10Y rate is similar in size to the move in the first two months of the 2013 taper tantrum (80bp). The move is less global and there has been fewer spill-over to short-rates, but the rate volatility still matters to global asset markets, including EM and especially fixed income. EMFX has not been immune either. Analysis from the Exante Data team shows that there are major differences to 2013. High Yield Asia (INR and IDR) took a big hit in 2013, but has been trading very resiliently in 2021 (chart left side). Meanwhile, other higher yields currencies (TRY, RUB, ZAR, BRL, MXN) have been volatile, but the cumulative drawdown to date has also been more moderate (2-3% now, vs 6-7% in 2013, at a similar point in the UST sell-off cycle) – (chart right side). Note, in some cases, EM currencies have been helped by local rate hikes. Founder Jens Nordvig notes, “Next week could be very challenging, however, for TRY given Erdogan’s replacement of the central bank chief late Friday.”

The USD was a bit stronger on the week. The high for the week in the DXY Index was 92.14 – a bit lower than last week’s high. Overall, our model shows that the USD underperformed slightly relative to rates moves. This underperformance was unusual given risk asset weakness. EURUSD had a low of 1.1873 on Friday – ending the week at 1.1903. Vaccine supply troubles and a new lockdown announced for Paris (see coronavirus section) weighed on the single currency. GBPUSD ranged 1.3812-1.3998. Off days in US equity indexes weighed on some of the higher beta currencies. 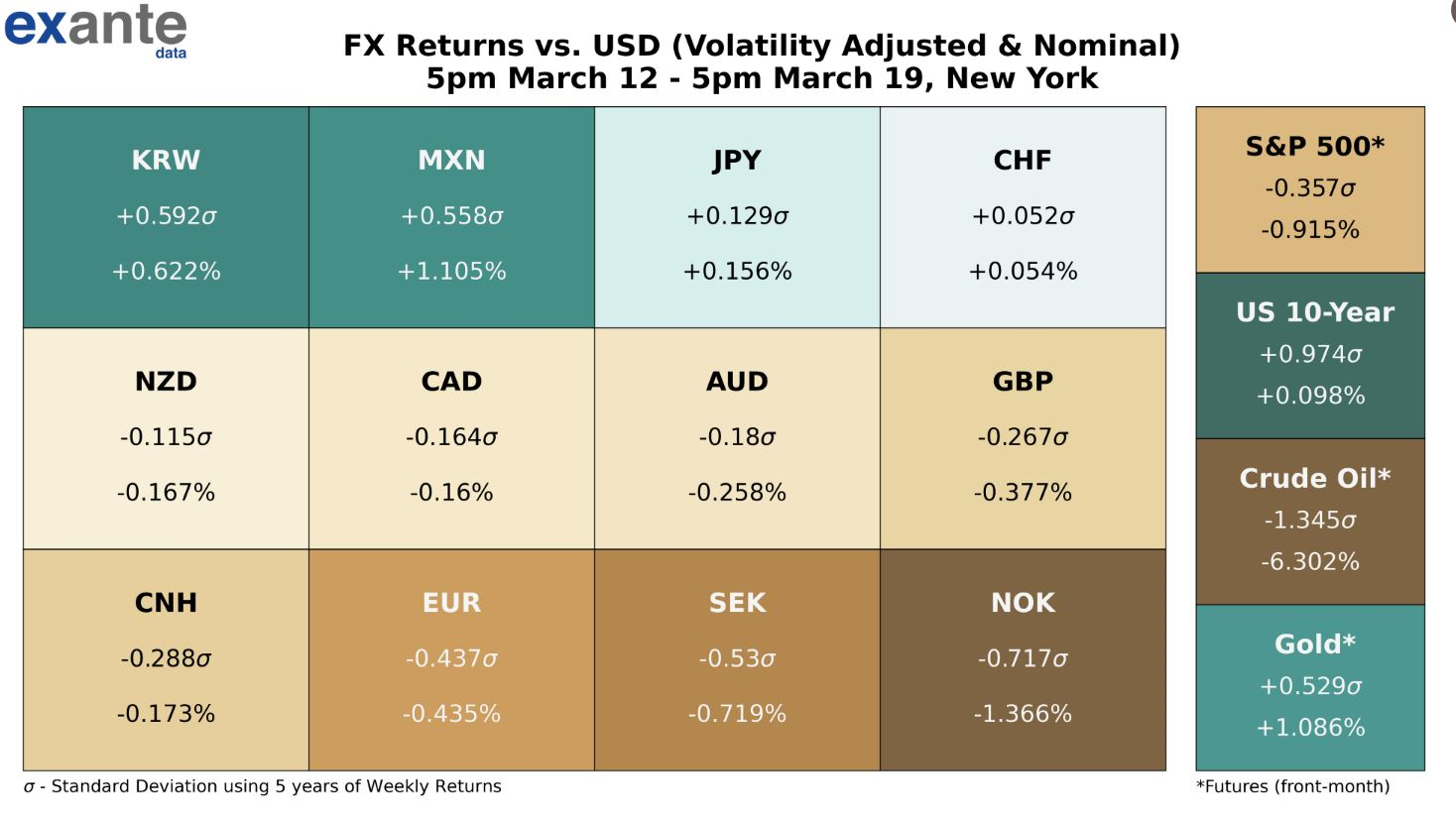 On Thursday, the European Medicines Agency (“EMA”) concluded its “preliminary review of a signal of blood clots in people vaccinated with COVID-19 Vaccine AstraZeneca…” The EMA  confirmed “the benefits of the vaccine in combating the still widespread threat of COVID-19… continue to outweigh the risk of side effects.” (EMA’s statement here). Post announcement, the BBC reported that Germany, France, Italy, and Spain said they would resume using the Oxford/AstraZeneca vaccine after temporarily suspending its use.

Meanwhile, Reuters reported that Germany’s Health Minister, Jens Spahn, warned that “vaccinations alone would not be able to contain the third wave of the pandemic as there are not enough doses, and said restrictions that were lifted may have to be re-imposed to contain the spread of the virus.” France imposed another month-long lockdown on Paris and 15 other areas, which started Friday at midnight. Italy has also seen accelerating Covid case growth, likely due to the prevalence of new variants. It seems that hopes for EU reopening are probably delayed towards May at this point. You can see our charts of daily new Covid cases in Europe as a whole, Germany, France, and Italy here.

On Wednesday, EU Commission President Ursula von der Leyen tweeted that BioNTech/Pfizer and Moderna were delivering on their vaccine contracts and that the first Johnson & Johnson vaccines would arrive in April. In the same thread, she tweeted, “We [EU] can achieve our target to have 70% of adults fully vaccinated by the end of summer.”

There was some concern over vaccine supply in the UK this week. At Thursday’s UK coronavirus press conference, PM Johnson said “it is true that in the short term, we are receiving fewer vaccines than we had planned for a week ago – that is because of a delay of a shipment from the Serum Institute…as a result we will receive slightly fewer vaccines in April than in March, but that is still more than we received in February.  And the supply we do have will still enable us to hit the targets we have set…We will still offer a first dose to every adult by the end of July.”  He also said that this supply issue would not impact the UK’s reopening timetable. Johnson received his first dose of the AstraZenaca vaccine on Friday – he posted the photo here.

The US vaccine program is proceeding robustly. As of Friday morning, 118.3 million vaccine doses had been administered. On his “potus” Instagram account, President Biden posted that his goal of administering 100 million shots in his first 100 days as president was reached in 58 days. Last week, Biden said he would instruct states to open vaccines to all adults from May.  We think this likely means the Administration is confident that the vulnerable can be fully protected by this date on current trends and with expected supply. On this account, the US has indeed made great strides as shown in the chart below. 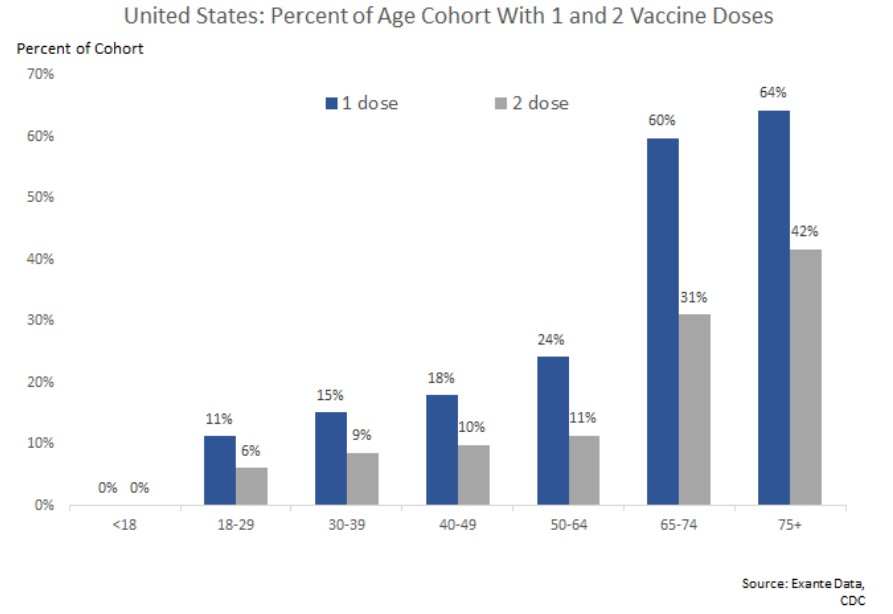 We launched a new Mexico country page on our data and analytics platform. It provides an overview of some key components of the Mexican BOP (including in seasonally adjusted terms), such as trade, remittances and tourism.

Founder Jens Nordvig appeared on Bloomberg Surveillance on March 16.  Ahead of the FOMC on 17 March, Jens talked AIT and the Fed, the Euro, and vaccines in Europe.

Head of Asia Pacific, Grant Wilson, has a new opinion column out in the Australian Financial Review: Facebook’s coin is a bad idea, whose time has come. “Different rules, and new thinking, will be required to cope with this new era of digital currencies.”