Week In Review:  Catching Up

US equities have enjoyed a stellar run since the pandemic panic just over a year ago. Work by Senior Strategist Alex Etra and Exante Data team members shows that one under-appreciated aspect of this strong performance is the support provided by foreign investors; indeed, we find that any way you slice fund flow data, there has been a dramatic acceleration in equity inflows to the US in the past year. This is confirmed in official Flow of Funds and BoP data; the 2.7% of GDP inflow in 2020 has only been surpassed twice in history (in March 2015 and mid-2009.)

Moreover, our high frequency proxies for the BoP such as the TIC data suggest these trends have persisted so far in 2021, with estimated foreign equity inflows in January and February of $152bn and $146bn respectively. 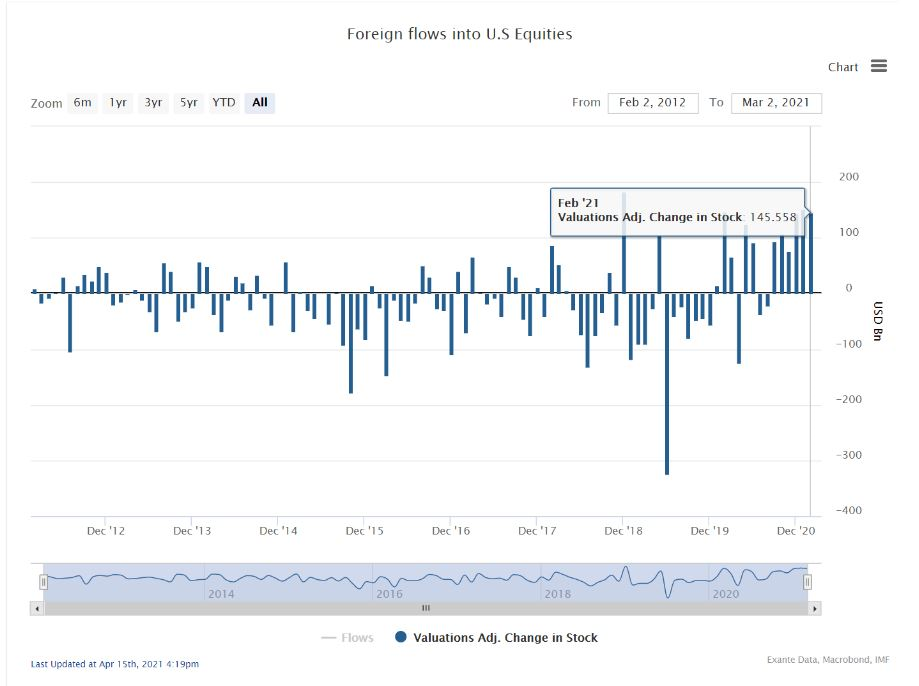 Turning to central banks, here are Senior Advisor Chris Marsh’s notes on ECB: “The ECB policy meeting was relatively uneventful, with Reuters reporting afterward that Governing Council agreed not to discuss the June policy decision until the new forecasts are available. In this way, President Lagarde was able to claim in the press conference that tapering of PEPP was not raised at the meeting; focus now turns to the revised staff forecasts and policy meeting in 7 weeks. Looking to the Strategy Review, President Lagarde noted that they hope to report on or before the Fall this year, and that they are considering various proposals including Yield Curve Control. This is the first time this option has been acknowledged as a possibility among several under consideration. The Strategy Review will be a crucial development later this year.”

In other central bank news, the Bank of Canada at Wednesday’s policy decision announcement and MPR release, upgraded its growth outlook, scaled back its bond-purchase program, and moved-forward its expectation for when economic conditions would warrant a higher policy rate. This makes the BoC the first major economy to reduce its emergency levels of monetary stimulus.

Ahead Next Week: Select economic releases. Next week sees monetary policy decisions by: FOMC, Riksbank and the BoJ.

The dollar underperformed for the fourth consecutive week this week. The underperformance is not due to risk-seeking sentiment as equities were essentially flat on the week. The dollar’s performance this week (yellow triangle) was indeed 70bps below what would be expected. Further, note that the prior three data points (red triangles) were all significantly lower than would be be expected given the equity signal. We view this as evidence that more pronounced USD weakness can kick in when positions are cleaner.

The DXY Index ranged 91.74-90.81 – low came on Friday but remained above 90.0 support. EURUSD broke topside 1.2000. The high was 1.2099. GBPUSD was stronger as UK Covid restrictions continued to ease. GBPUSD broke topside 1.4000 – the high was 1.4007. AUDUSD broke above 0.7800 reaching a one-month high. NZDUSD broke briefly above 0.7200. USDCAD moved sharply lower on Wednesday when the BoC announced that it would scale back its bond-purchase program. USDCAD ranged 1.2635-1.2461, with most of that movement occurring during the BoC’s announcement and press conference.

The leaders in terms of vaccine roll-out, with Israel at the very front, are on a very promising path that looks like Covid near-elimination will be feasible soon (in a reopened economy!).
A number of important high income economies: The US, the UK, the EU and Canada will likely soon be on a path that will resemble Israel’s. The US may get there by May and the UK may already be on that path, while the EU and Canada may achieve this improved state with roughly a 2 month lag. Overall, it seems highly likely that the severe phase of the pandemic will be over in these high-income economies by the summer (assuming we can avoid fresh dramatic hick-ups around the vaccine roll-out).
The US is on a path to have 50% of the population vaccinated by mid-May. Even if the pace of administrations moderate as we reach population groups with lower acceptance, we think a number close to 50% should be sufficient to generate dramatic improvement in case dynamics, and especially the more severe cases. In the US, 222 million vaccine doses have been administered so far.
In Europe, Germany and France are expected to catch up with improving trends in May.  Currently, Germany and France are lagging, as they have no obvious signs of negative case growth (though there are Easter effects/noise). Our expectation would be that stricter lockdowns, as implemented in April, together with more rapid vaccinations (which should take the full vaccination rate in Germany to around 25% in a month’s time), and better weather, makes it highly likely that case counts will look better during May and that reopening steps can also be taking during that month. In this tweet, the European Commission notes that vaccination  in the EU is speeding up. There have been 123 million vaccine doses delivered. Further, mobility remains very depressed in France (especially after the latest lockdown) and in Germany. Hence, the economic recovery potential is most substantial there.

Head of Asia Pacific, Grant Wilson, released a new opinion column in The Australia Financial Review. The good, bad and ugly of crypto. “Crypto has entered into a manic phase. Not everything is bad, but a lot of what is happening now is downright ugly. Crypto can and will have to do better than this.”

Encore: Founder Jens Nordvig joined Raoul Pal and Real Vision for a deep dive into the global macro outlook. The full interview is here, but you have to be a Real Vision subscriber to view. Clips from the interview are here and here.

Get an short introduction to Exante Data and the Exante Humans behind our Substack blogs – here.