Due to the pandemic, the Jackson Hole Symposium was held virtually this year and was open to the public. On Thursday, Fed Chairman Powell gave his highly anticipated speech, New Economic Challenges and the Fed’s Monetary Policy Review.   On price stability, the FOMC adjusted its strategy for achieving its longer-run inflation goal of 2 percent by noting that it “seeks to achieve inflation that averages 2 percent over time.” Powell stated, “Therefore, following periods when inflation has been running below 2 percent, appropriate monetary policy will likely aim to achieve inflation moderately above 2 percent for some time.” On maximum employment, the Fed’s revised statement emphasizes that it “is a broad-based and inclusive goal” and that the Fed’s “policy decision will be informed by our ‘assessments of the shortfalls of employment from its maximum level’ rather than by ‘deviations from its maximum level’ as was the case previously.”  The move to “average inflation targeting” was expected by the market. Overall FX price action on the day saw some initial reaction to the headline – USD weakening –  and then profit taking.

Pre-Jackson Hole, Founder Jens Nordvig took a look at how the Fed’s balance sheet has changed since end-2019 and contemplated how it might evolve in coming months including due to Powell’s Review of the monetary policy framework. He notes that while Powell’s announced Fed move to average inflation targeting was anticipated, there is still room for the Fed to surprise on asset purchase announcements, likely later on (watch out for Sep FOMC…)

On Friday, Japan PM Abe announced his resignation due to worsening health. Abe’s party (LDP) and Komeito have a strong majority in the Diet, especially in the house of representatives. The LDP is now expected to go through an internal voting process for selecting Abe’s replacement. Local press has mentioned September 15 or end-September as the likely timing of this process. Jens commented on what Abe’s resignation means for JPY:  “While the next LDP Prime Minister is likely to ensure a degree of continuity, Abe had a special role in economic and market dynamics since end-2012. His resignation creates notable uncertainty, including about FX management, especially since that ‘policy’ has been an opaque (non-official) process.” (Tweet).

The  USDJPY move lower on Friday was moderate and happened along with broad-based USD weakening. Looking ahead, Jens notes that “flow dynamics (M&A, GPIF, Toshins) are crucial,” and that Exante Data is also “increasingly focused on understanding the importance of the BoJ’s outsized liquidity injections. We recognize that we only have a partial understanding of JPY underperformance (vs macro factors) since March, and we will try to analyze all factors in further detail, to understand the ‘underperformance puzzle more fully.’” See Chart: Exante Data Factor Model Output – USDJPY.  There is an ongoing deviation between USDJPY actual (orange line) and our model predicted (blue line). 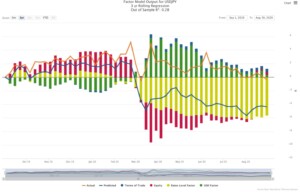 USD was broadly weaker (heatmap below).  We note that USD underperformance  is more significant than can be explained by strong risk seeking sentiment – reflected by US equities this week (Tweet this).  CNH gained, trading through 6.90 support, which the PBOC seems fine with based on the (mostly negative) adjusted fixing errors. AUD also had a strong performance, finally breaking topside through the sticky mid-0.7200s resistance area to trade above 0.7300. NZD had been lagging due to a move dovish RBNZ but caught up mostly on Friday, breaking topside 0.6700 resistance.  Despite not so constructive news on the BREXIT trade negotiations front, GBP topped 1.3300. EUR traded 1.1780 – 1.1840 most of the week before breaking above 1.1900 once again on Friday. High beta NOK and SEK were strong along with US equity index performance. 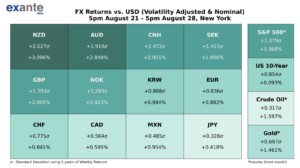 Chart: YTD FX performance “USDXYZ”.   As discussed above, the weak USD trend remains in tact with particularly strong underperformance this past week. The chart shows that USD weakness is broadening, with HY EM catching up with G10 and LY EM over the past week.

In Europe, Spain and France continue to drive accelerating case growth, while trends in Italy and Germany are stable and Belgium reports declining case counts. Overall, we find that deaths are responding more slowly in Europe than they did in the US’s second wave (which in turn was slower than the first wave there) – see chart. This is likely due to superior testing in the region. However, there are still some economic risks for Europe as authorities impose mobility restrictions, and fatality rates could move higher as hit ratios edge up too. 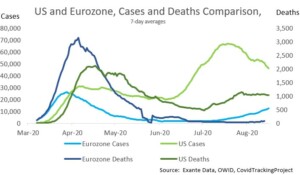 Chart: New Job Postings Online by select US states 28dma, % y-o-y. We took the largest US state economies out of the heatmap and looked at some history of the series.  One can see jobs postings had some recovery until the second half of July, when they plateaued and then declined. Texas and Florida have had just slight increases since. Texas is a bit outperforming national jobs postings. US initial jobless claims releases have been above 1 million for the most recent two readings. 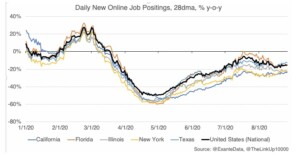 New York City: How is the Patient?

The future of New York City generated a lot of attention recently for whether it was “dead” or could be “revived.”  Blogger James Altucher’s negative outlook  was met by a impassioned defense and rally call from comedian Jerry Seinfeld in his NY Times op-ed. Jens has his own take on the topic based on his pandemic experience of operating his company remotely.  “We have probably seen the peak in work from home (“WFH”). Six months in, is very different than six weeks in… the negatives of WFH (social/behavioral) are starting to kick in, so it will be a two-way street from here, after an initial move in just one direction (positive).” Click to share Jen’s WFH thoughts.