Though it was relatively quiet, there were some notable happenings — S&P 500 edged past its pre-pandemic record high to a new one, $AAPL became the first US public company to surpass $2 trillion in market value, $TSLA shares were up over the $2,000 mark.

Turning to central banks:  ECB meeting minutes for July were released.  The key takeaway is mixed messages on PEPP (Pandemic Emergency Purchase Program), though the doves remain in control. In Governing Council discussions, an argument was made that the “flexibility of the PEPP suggested that the net purchase envelope should be considered a ceiling rather than a target” – suggesting that the envelop may not have to be used fully. But, this was followed by emphasis that under the baseline scenario from June, the PEPP envelope would be used in full. This last sentiment was reiterated in the communication section. Ahead, the September revised forecasts will be interesting since any signs of the inflation forecast increasing would strengthen the hawks’ hand.
July FOMC meeting minutes emphasized that uncertainty regarding the economic outlook “was extremely elevated.” Re: providing outcome-based forward guidance, participants noted that greater clarity on the likely path of the target range of the fed funds rate “would be appropriate at some point.” Participants did not seem that enthusiastic about yield curve control. Most who discussed it “judged that yield caps and targets would likely provide only modest benefits in the current environment.”  Ahead, the Jackson Hole Symposium will be held virtually August 27-28. Chairman Powell will speak August 27 at 9:10 am EST on the Fed’s monetary policy framework review.
Staying on the Fed, Founder Jens Norvid discussed a hot topic – is this QE different from QE 2009?  There is a lot of debate around the subject and the outlook for inflation. Jens notes that the politics around QE, and the degree of coordination (fiscal policy, credit policy) matters – so that it is different this time.
The Democratic National Convention was held. Joe Biden and Kamala Harris both accepted their formal nominations for President and Vice President respectively. Senior Advisor Brad Setser discusses the Biden Policy Agenda with regard to tariffs, buy US issue, and corporate tax policy here.
In politics elsewhere, protests continue in Belarus.  Tony Barber writing for the FT gives a balanced view on the situation, including a long historical perspective,  downplaying the risk of Russian military intervention, but highlighting the remaining risk of violent domestic crackdown.
USD was mixed on the week (heatmap below). US investors continue to add to their international equity exposure. After trading well above 1.1900 earlier, EUR was weighed on by weaker than expected PMI data. GBP strength was tempered toward the week’s end as Michael Barnier commented that that the EU was worried about the state of Brexit trade negotiations with the UK.  NOK and SEK remained on their backfeet as US equity market performance was mixed. JPY strengthened reaching a low of around 105.15. CAD also strengthened – it had been lagging the previous positive risk sentiment. AUD is capped so far slightly above 0.7200 and NZD remains hindered by recent RBNZ dovish stance. But that dynamic was enough for AUDNZD to break 1.1000 topside this week.  DXY Index is back above 93.00 support.   Re: Turkey –  for now there are signs of diminishing FX sales by CBRT and state banks MTD. Jens talks about the Lira unraveling here.
Ahead – select economic data releases: Sunday, Aug-23: New Zealand Q2 Retail Sales Tuesday, Aug-25: Germany GDP Q2, Norway Q2 GDP, German IFO Business Climate Index (Aug), US New Home Sales (Jul), CB Consumer Confidence (Aug), NZ Trade Balance (Jul)  Wednesday, Aug-28: US Durable Goods Orders (Jul), Australia Private New Capital Expenditure (Q2) Thursday, Aug-27: Swiss Q2 GDP, US Q2 GDP revision, US initial jobless claims, Jackson Hole Symposium – day 1: Fed Chairman Powell speaks 9:10am EST, US Pending Home Sales.  Friday, Aug-28: US Core PCE Prices (Jul), US Personal Spending (Jul), Canada Q2 GDP, US Michigan Consumer Sentiment (Aug), Jackson Hole Symposium day 2. Other: The US Republican National Convention runs Aug 24 – 27. 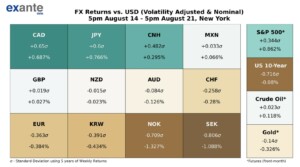 Chart: YTD FX performance “USDXYZ”. High Yield EM FX has lagged the USD weakening trend, especially with respect to EUR and G10 FX vs. USD. Factors keeping HY EM weak include: their central banks have been cutting rates more aggressively than in past downturns (lack of inflation fear), weaker balance sheets (government and external) which should require additional risk premia given global uncertainty, HY EM has been harder hit by the COVID-19 shock than LY EM — adding to cyclical under-performance and future balance sheet vulnerability. Ahead, how EM policy makers manage to balance the need for stimulus with the need to anchor inflation expectations and avoiding capital flight may be crucial to the EM outlook. 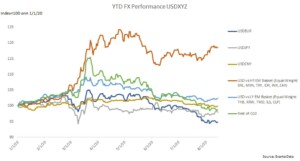 US cases are plateauing and focus has shifted to a global second wave. Spain’s significant second wave persists. The latest data show that Spain reported over six thousand new COVID-19 cases, with daily growth now trending at 1.7%. The outbreak in Spain is still not at the level of the US second wave (chart). But we should be on alert if growth continues for another 2-3 weeks, without clear moderation. For now, our base case is that dramatic lockdown measures there can be avoided, as was generally the case in key US states (although behavioral changes were needed). 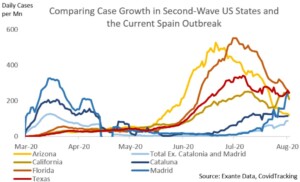 Below is our heatmap:  % y-o-y New Job Postings Online by US state using data provided by our friends at @LinkUp. Sorted worst to first.  Broadly, the heatmap shows a plateau in postings the second half of July and a continual decline since. This was reflected in the latest initial jobless claims release, which had a modest jump to 1.106 million for the week ending Aug. 15. Seen below, Hawaii jobs postings fell the most. Hawaii is also the state currently with the highest daily coronavirus growth rate (7 day ave).  See this heatmap.