The week started with news that Russia was ready to roll out the first COVID-19 vaccine, “Sputnik-V” despite warnings by global heath authorities that the vaccine has not completed critical clinical trials. Weighing on markets, Congress remains at an impasse on a new US coronavirus stimulus package. Both the US House and Senate are now on recess and, according to The Hill, are not expected to return until September 14th and September 8th respectively. US-China trade talks, which were supposed to happen this weekend, have been postponed. This makes sense in the context of White House Advisor Kudlow pre-announcing earlier in the week that the trade deal is “fine”. The delay does not reflect any substantive issue impacting Phase One, but rather an extension of the somewhat nebulous Communist Party leaders annual retreat at the seaside town of Beidaihe. In politics elsewhere, protests in Belarus continue over the disputed presidential re-election of Alexander Lukashenko. The FT has a good overview of recent developments.

Turning back to China, we have been getting some questions on a Bloomberg article on “hints” of PBOC “QE.”  PBOC QE would seem to be a bit at odds with the recent stance of monetary policy (which has not been especially accommodative). As with the period back in 2015-16 and the refinancing of LGFVs and shadow credit via local government bond issuance, recent specialized bond issuance may indeed require PBOC liquidity injections to help with financial digestion but its still a bit early to call this “PBOC QE.”   The key point is: There were no signs of an increase in PBOC Claims on Government despite speculation of PBOC “QE” based on bond holding data for the month. 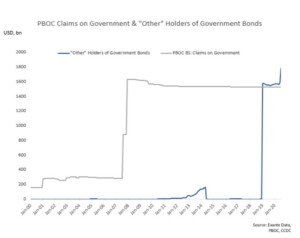 Gold was off from its highs this week as US yields ticked up.  Head of Asia Pacific, Grant Wilson, wrote a timely opinion piece in The Australian Financial Review, “Why Gold is Not a One Way Bet.”  Downside risks include the fact that end user demand has collapsed, and a coronavirus vaccine.  In addition, without Turkey’s robust demand, central bank purchases of gold would have fallen by 83%, to roughly $3.5bn for the year to July. See chart  below – Gold Demand & Central Banks. Net purchases through 1H were 233m tonnes, a fall of 39% from same period 2019. Turkey accounts for fully 170m tonnes (shown in green). 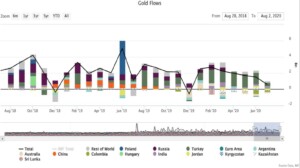 Importantly, Founder Jens Nordvig wrote about the historic shifts in fixed income and currency markets that we are observing in 2020 in his public letter Fixed Income is Dead, Long Live FX. “Institutional investors will have to adapt and be willing to take more risk, and generate returns in global FX; for some, perhaps even via new exposure to Chinese bonds. Taking currency risk effectively, may even be a matter of survival. Long live the new king, FX.”

USD was broadly weaker on the week (see heatmap below).  Equity outflows are accelerating – US investors remain engaged with international equities.  JPY has been lagging the USD weakening trend. We think GPIF flows is part of the story. Higher beta NOK, SEK and AUD gained with US equities. EUR rose as well, trading briefly to 1.1900. See Founder Jens Nordvig’s video clip on EURUSD valuation. He takes a look at the size of the “NGEU recovery” in EUR in context.  NZD remained on its backfoot for the week due to the dovish shift from RBNZ — tweaks to QE and openness to negative rates.  DXY Index is back above 93.00 support.

US cases are plateauing and focus has shifted to a global second wave. Though many Eurozone countries indicate climbing case counts, the growth rate of cases is modest below 1.0%.  Overall, markets have become much more resilient to spikes in case growth.  We are keeping an eye on US fatalities. We have seen COVID-19 fatalities up 2-3x in the US from the lows seen end-June. However, some signs are better for September. There is now some evidence from moderating hospitalization that fatalities can start to moderate within 2-3 weeks (chart – red line). Read Jens’ thread on Covid-19 fatalities and US school reopenings. 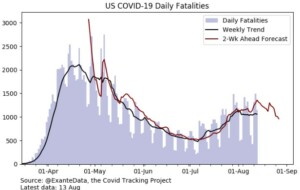 Introducing our new heatmap: New Job Postings Online by US State, % y-o-y, 28dma.  Broadly, it shows a plateau in postings in the second half of July and a general decline since. Updated weekly on our Twitter account – subscribe at bottom. 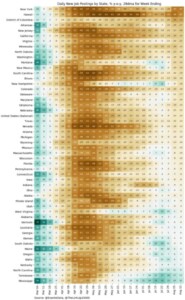 We added a Turkey Country Page to our Global Flow Analytics Platform to add high frequency tracking of the FX balance sheet of the banking sector and Central Bank.

We are excited to officially announce Exante Data’s Data Explorer!  With over 70k unique time series in our database, it’s important to be able to find what you’re looking for and come across series and data relationships you didn’t know existed. To that end we’ve created our Data Explorer with multiple ways of finding the data you want quickly along with helpful functions to get raw series CSVs.

For more information, institutional clients — please reach out to us here.