Week In Review: An Unusual Episode

Week In Review: An Unusual Episode

US equity indexes had their largest losses in three months: DJIA -3.3%, S&P 500 -3.3%, NASDAQ -3.5%. This was a highly unusual week in the market. A technical situation occurred mainly with GameStop (GME), which involved retail traders, with the help of social media, combining forces to attack a short position.  This resulted in a short squeeze, with the stock skyrocketing, and a related reduction in gross equity exposure within L/S funds.

Founder Jens Nordvig notes, “But it is not a correction that seems linked to any major macro trend (such as global growth shock). The USD has benefitted from the risk aversion, and position reduction. But we do not view it as a catalyst for a sustained bullish USD force, although further risk reduction is possible in the near-term. The correlation between GME and SPX is likely to weaken over time, even if GME stays very volatile.”

Chart: Over the week as a whole, the USD derived limited support from equity market weakness, clearly underperforming relative to the historical relationship (yellow triangle is most up to date recent realized Jan 29).

Turning to Europe, Senior Advisor Chris Marsh says, “It was a noisy week for the euro, as policymakers blew hot and cold on the possibility of the ECB taking rates further into negative territory. On Wednesday, the Netherlands’ Klaas Knot told Bloomberg that the ECB has tool to fight a stronger euro, including a rate cut. This was followed by a story that policymakers had agreed to push back against market pricing which had ruled out further rate cuts in the near-term.”  However, by the end of the week a number of Governing Council members, such as Ireland’s Makhlouf and Latvia’s Kazaks, claimed rate cuts were not needed at this point, while Reuters cited five sources claiming ‘the ECB was unlikely to cut its already record-low policy rate.’ ”

Chris points out, “Last week also saw an acceleration in HICP in Germany. While January usually sees a near-1 percent month-on-month decline in prices due to strong seasonality, this year saw a 1.4 percent increase due to the reversal of the July VAT cut, new carbon taxes, and re-weighting of the basket. Whether there are more fundamental inflationary forces at work, and how the ECB will react to such a development, remains an open question. Next week sees the flash euroarea HICP for January which also looks like overshooting expectations.”

USD was stronger on the week. The DXY Index ranged 90.09 – 90.86, with the high on Wednesday – the initial day of the GME situation. The VIX Index rose above 37.00 on Wednesday, up from 24.00. The DXY ended the week at 90.53. The VIX remained elevated and hit a high of 37.37 on Friday. EURUSD ranged 1.2181-1.2063, with the low on Wednesday when the USD strengthened on risk aversion and as ECB’s Knot suggested that markets were underestimating ECB rate cut odds – also weighing on the single currency. GBPUSD ranged 1.3611 – 1.3753, supported by the UK’s positive vaccine rollout. JPY weakened vs USD on the week, despite the risk averse equity markets – ending at 104.71.  Higher beta FX generally weakened along with US equities. 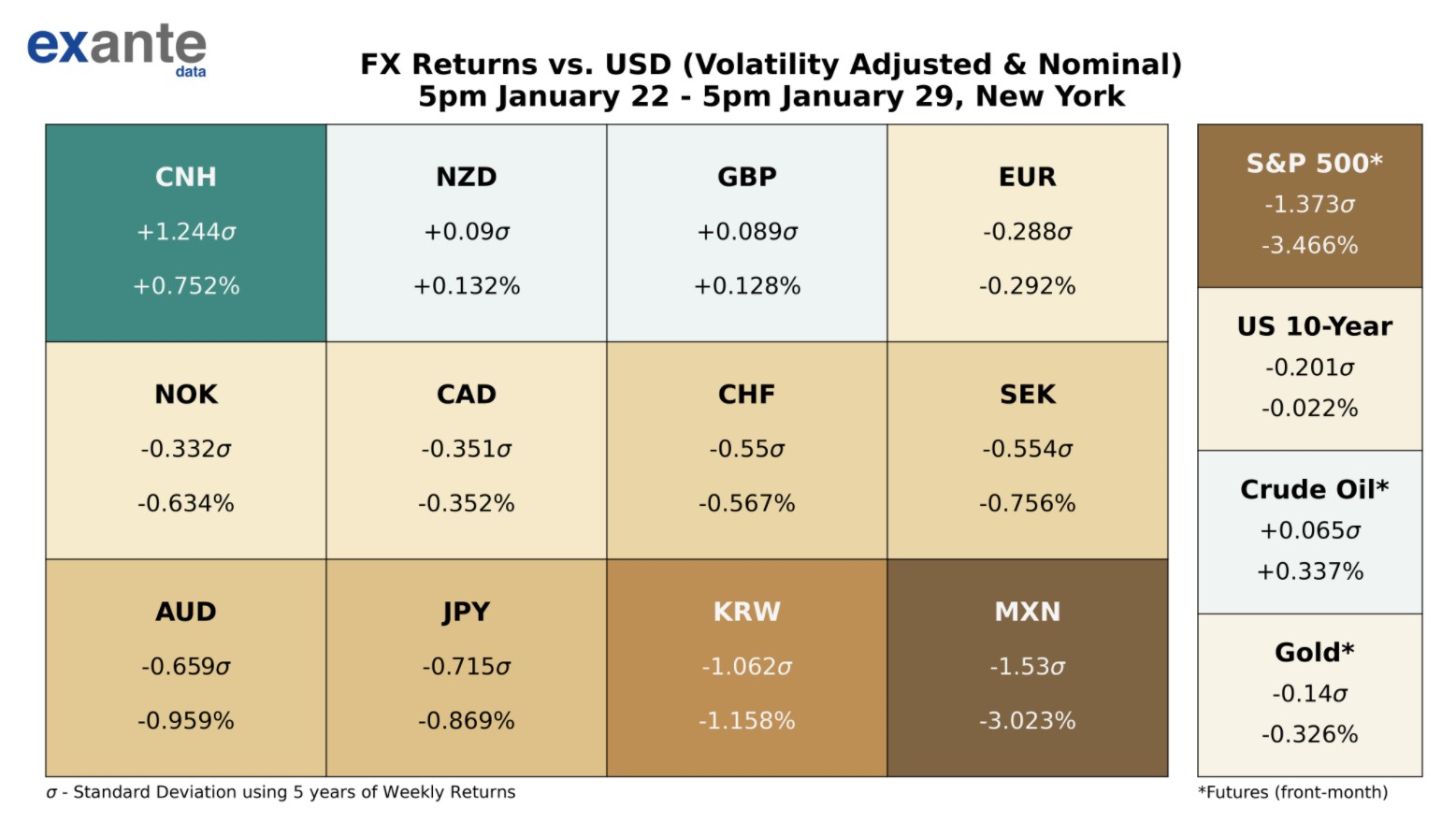 Europe: The AstraZeneca/University of Oxford Covid vaccine received approval from Europe’s drug regulator (European Medicines Agency) on Friday.  It was approved for all adults despite Germany’s immunization commission recommending it only for people between the ages of 18 to 64.

AstraZeneca remained front and center in headlines this week given its escalating vaccine supply contract dispute with the EU. On Wednesday, EU Health Commissioner Stella Kyriakides tweeted that the tone was “constructive in our exchange with AstraZeneca CEO Pascal Soriot, but that “We regret the continued lack of clarity on the delivery schedule and request a clear plan from AstraZeneca for the fast delivery of the quantity of vaccines that we reserved for Q1.”  On Friday, EU Health Commissioner Kyriakides tweeted that, with the agreement of AstraZeneca, the European Commission published the redacted vaccine supply contract. This was done as “Transparency and accountability are essential to build the people’s trust in our vaccine strategy,” said Kyriakides. The WSJ reports on AstraZeneca’s vaccine production setbacks here.

On Friday, Politico reported that the EU passed a regulation “instructing its customs authorities to block all COVID-19 vaccine exports to some 100 countries worldwide, unless they receive an export authorization from national governments in the EU.”  The regulation enters into force today, Saturday.

Despite negative vaccine headlines out of Europe in terms of vaccine administration lagging both the US and the UK, as well as considerable uncertainty about the contribution of AstraZeneca to overall vaccine supply, the Exante Data team thinks “there is upside risk to currently (bearish) supply expectations once Pfizer’s Belgium plant retooling and German production enter the equation in February and March.”

You can see global Covid case data on our Twitter feed here.

The first cases of the South African Covid variant were found this week in South Carolina — see this Statnews article. The three coronavirus variants (UK, South African, and Brazil) have now all been found in the US.

According to the CDC, the US has distributed 49.2 million vaccine doses, and has administered 27.8 million doses.  The number of people who have received two doses is 4.78 million (data as of Jan 29 6:00am ET – latest). As seen in the chart below, the US recently had it best day in terms of daily vaccine doses delivered. We update our Covid charts daily on our Twitter feed. You can see week-on-week growth in new Covid cases by US states here. 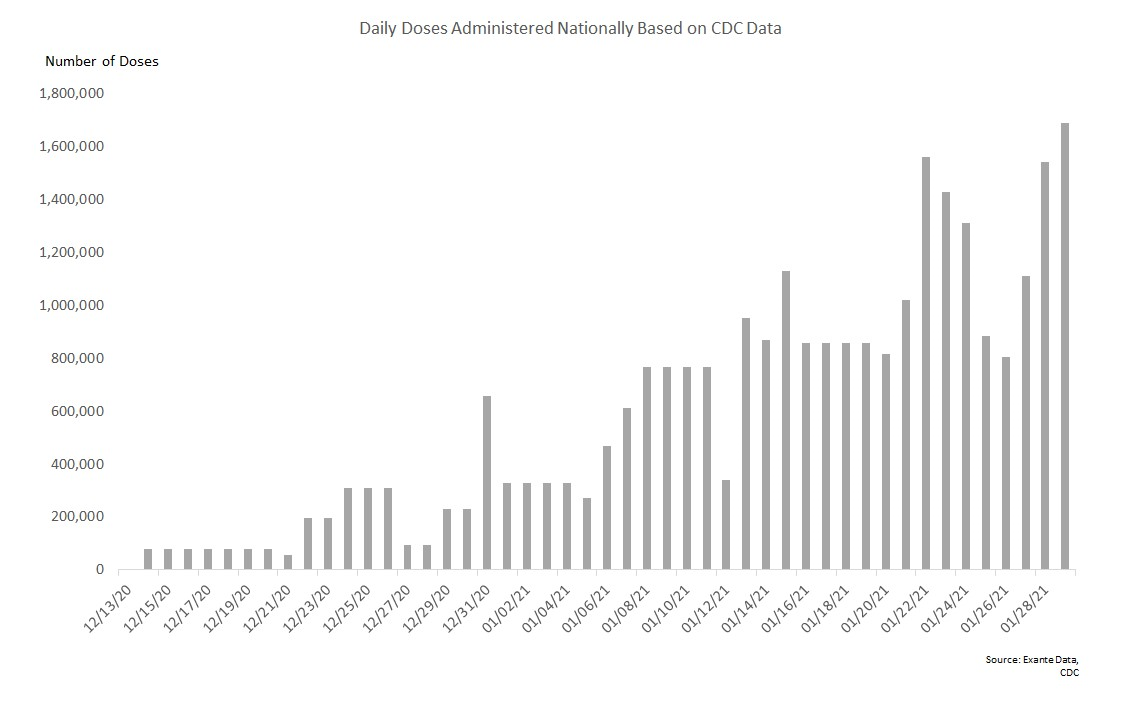 Digital Currency Series: Part 1:  This week we kicked-off of a series of articles for clients, that unpack some of the main themes that have emerged around digital currencies in recent weeks. Our first installment attempts to confront some of the issues around analyzing digital currency flows. Head of Asia Pacific Grant Wilson aims to provide weekly thematic pieces ahead.

Senior Advisor Chris Marsh has a new Substack blog: Fed Swap Lines During the 2020 Global Pandemic.  “The Federal Reserve USD swap use was comparable to 2008-09; this time Japan benefitted most, while some euroarea countries accessed more than others.”

Encore re-post:  Grant Wilson joined the Wisdom Tree ETF Behind The Markets Podcast. He gives an overview of Exante Data’s macro view 10 minutes in and talks about China’s digital currency starting around 23 minutes in. This is an opportunity to hear some of our views in depth.

Advisor Amelia Bourdeau will be on our Exante Data Twitter feed (please follow) in NY mornings to interact and talk charts, markets, and Covid — you can find her there – reach out with market comments/questions/observations!