Week In Review: Off to a Busy Start

US equity indexes were higher on the week: DJIA +1.6%, S&P 500 +1.8%, NASDAQ +2.4%. Democratic Senate candidates won their respective races in Georgia, giving the Democratic party a Senate majority. Wednesday’s turmoil at the US Capitol, which interrupted the counting of the electoral college votes, capped US equity index rises on the day. However, Congress was able to resume counting electoral votes that evening, declaring Joe Biden the President-Elect. As such US equity indexes resumed rising on Thursday.

In other market news, Bitcoin surpassed 40,000 on Thursday and 41,000 intra-day on Friday. Founder Jens Nordvig points out that “Cryptocurrencies are incredibly volatile (4-8% Std dev of daily returns). Nevertheless, Thursday’s move was a >2 sigma event for Bitcoin.” (Thursday chart below). 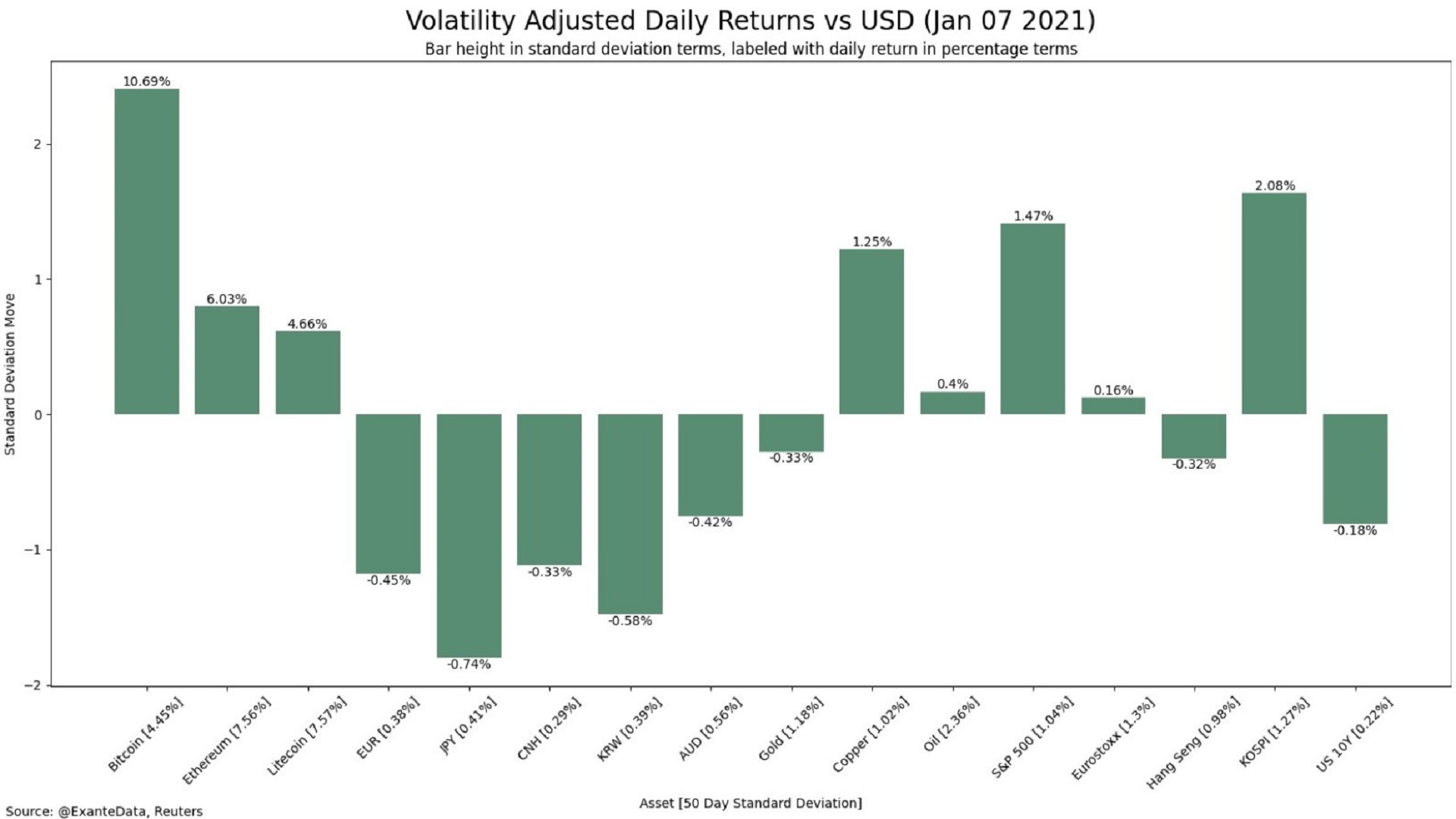 In a macro note released this week, the Exante Data team shares its thoughts on USD strength on the back of rising US yields:  “In past USD cycles, it is almost uniformly the case that periods of notably and sustained USD gains involve global growth weakness and/or risk aversion. Meanwhile, repricing of the US yield curve alone has often been insufficient to boost the USD on a trend basis. Upward moves in US yields can generate temporary spurts of USD gains, but yield curve moves in the US alone are often not sufficient to dominate signals from global growth.”

The team goes on to note that “Global growth indicators, while challenged by pronounced winter COVID waves, have generally held up. Further, our tracking of outbound equity flow from the US is also sending a fairly healthy signal about global growth, although not as elevated as in November. Moreover, we would argue that with the Fed mostly committing to anchor short rates in 2021 and 2022 (and likely further), the potential for the US short end to move is somewhat limited.”  The team is of the view that “the trend is for USD weakening in H1 2021, but after a big USD move since March 2020, it is prudent to recognize that there can be more two way risk.”

USD was mixed to stronger on the week. The US 10 year yield moved above 1.0% and some political uncertainty was removed with the Senate majority decided and Biden confirmed as the President-Elect. The DXY Index broke resistance at 90.00 on Friday, ending the week at 90.06. Despite a disappointing December payroll read, a decline of 140k, the US 10 year yield rose on Friday lending some support to USD as the market anticipated more fiscal stimulus ahead. The December payroll decline of 140k was not too surprising given that ADP Employment was weak for the month, and the ISM Services Employment Index showed a contraction for December.  EURUSD ranged 1.2347-1.2194. GBPUSD ranged 1.3699-1.3537. USDJPY ranged 102.6-104.06. Dollar Bloc currencies were supported by rising US equity indexes. AUDUSD broke topside 0.7800. NZDUSD broke topside 0.7300. Gains in CAD vs USD were capped by disappointing December reads for the Ivey PMI Index and Canadian Employment. USDCAD ranged 1.2788-1.2632.

Since it is the start of January, take a look at  USD seasonality for the month from our proprietary FX factor model here. 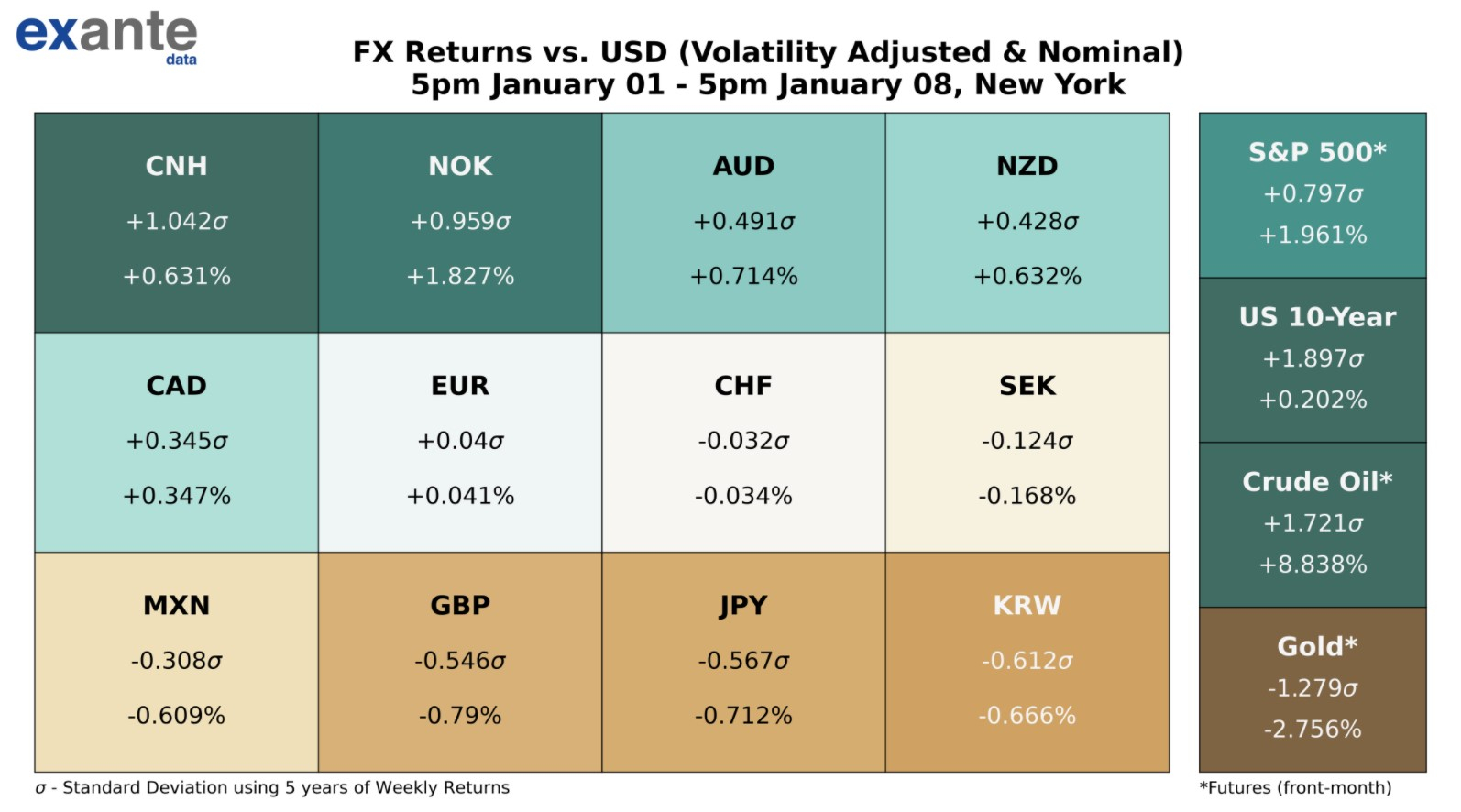 International: The UK continues to struggle with its new Covid variant. Cases have reached a new peak recently (red bar in chart) and deaths are climbing as well.  On Friday, London Mayor Sadiq Khan declared a “major incident” in London in order to fast track national help for the NHS, which he says is “overwhelmed.” . Kahn also noted that “One in 30 Londoners now has Covid-19.”

Also on Friday, the MHRA gave emergency use approval to the Moderna Covid vaccine. The UK now has three vaccines approved for emergency use – Pfizer/BioNtech, AstraZeneca/Oxford, and Moderna. At Thursday’s coronavirus press conference, PM Johnson detailed the national vaccination plan to February 15, which is the deadline to have the 15 million people in the four main priority groups have appointments to start the vaccination process/receive first shot.

US: The situation in the US has largely played out as expected, with the winter wave beginning in the Mid-west where temperatures fell first. We think California was impacted by super spreading events during the holidays, and this is likely true of other non-northern hot spots.  We are concerned about hospital pressure in California and Arizona both of which exceed the hospital pressure seen by Arizona during its summer wave. See hospital pressure chart here. Sadly, data on January 7 showed a new peak for daily US Covid deaths at slightly above 4,000.

The UK Covid variant has been found in Colorado, California, Connecticut, Florida, and Georgia. CNBC reported on Friday that in a report dated January 3 sent to states, the White House Covid task force has warned of a possible new “US variant” that is driving the spread. On the vaccination front, according to the CDC, 22.1 million doses of vaccines have been distributed and 6.7 million people have initiated vaccination (received first shot, data Jan 8). While the pace of vaccinations started too slowly, it has recently picked up to 768k on January 8 (chart) and we expect that number to grow to 1 million per day in coming weeks. 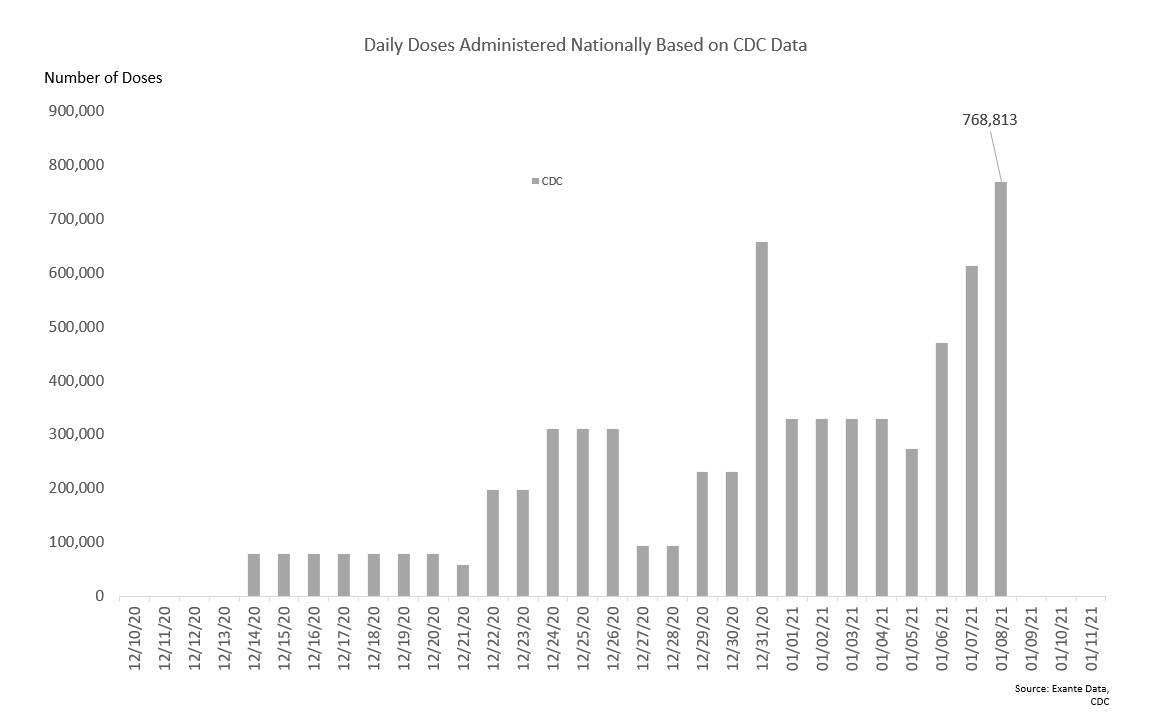 We released a month-end rebalancing tool for clients:  Our models examine the month end effect in FX. Essentially, equities and bond portfolio managers often hedge the FX risk in the purchase of foreign assets. We have two models: 1). S&P 500 Returns – This model simply looks at the returns of the S&P 500 over the selected period and creates its signals based on buying or selling the USD. 2). Bilateral Equity Returns – This models looks at the performance of US equities vs the foreign currency equities in proportion to the bilateral holdings of each, and will signal based on the foreign currency.

In media, Head of Asia Pacific, Grant Wilson talked digital currencies with ausbiz.  “When thinking about digital currencies, remember that it’s not just crypto. Volatility in the sector’s not calming down any time soon but that won’t change the fact that the sector is here to stay.”  For more, see Grant’s recent Substack blog:  China’s Digital Currency is a Game Changer (Part 1).

If you are an institution and would like more information on our Macro Strategy, Global Flow Analytics, and/or Exante Data API services — please reach out to us here.