It seemed a bit like groundhog day for market headlines this week. Investors continued to watch for signs of the possibility of new fiscal stimulus ahead of the election. Brexit negotiations dragged on. Europe and UK announced more restrictions aimed at stopping the rising COVID-19 case counts (see Coronavirus section below). US President Trump and VP Biden held duelling Town Halls on separate networks on October 15 (see how betting odds on the US Presidential Election shifted over the week – PredictIt section below).  Results of today’s NZ General Election are in – Labour’s Jacinda Ardern won a decisive second term.

Posturing by UK PM Johnson regarding Brexit on Friday morning created headline risk.  PM Johnson hinted that the UK should prepare for “an Australia style” trade deal, meaning a No Deal outcome. Head of Political Risk Analysis Wouter Jongbloed notes, “Crucially however, he did not signal an end to negotiations, rather that he expects the EU to make the concessions needed to move towards a trade deal. The negotiations will continue next week in London therefore. Interestingly, PM Johnson’s response returns to a core promise of the Brexit-effort (to “Take Back Control”), by focusing on (i) legislative sovereignty, and (ii) fisheries.”
Headline risk is likely to remain prevalent as Wouter notes that “the UK is continuing to virtue signal for its domestic audience. We believe this is No.10 playing the weekend news cycle; Creating the appearance of Government in control warning the EU of a cliff edge against which the EU then tacks — coming back cap in hand; creating the possible appearance of a PM Johnson ‘win.’ The communications are mostly now directed at the Tory 1922 Committee and at the domestic audience. The EU still expects talks to continue.”
At the European Council press conference, Chancellor Merkel didn’t give additional hints as to where the hoped-for flexibility from Europe will come from (and neither did European Council President Michel), reiterating:  “All countries are ready and willing to negotiate. I believe it would be in the interest of all sides to find an agreement, however we have to be ready for the alternative.”  Wouter points out that Chancellor Merkel said the informal summit planned for November 15 in Berlin will not go ahead in person due to coronavirus escalation. He states that  “the chances for a hard-nosed No Deal outcome to the Brexit process are inversely correlated to the importance of the UK’s policy response to Covid19. The more pressing the situation gets, the less likely a No Deal outcome to Brexit is.”  (See coronavirus update section below).

USD strengthened this week.  The DXY Index ranged 93.02 – 93.88 (at the week’s end). Higher beta AUD and NOK declined the most as the slight rise in US equity indexes was tentative. Also weighing on AUD were dovish comments by RBA Gov Lowe in a speech this week. He stated “we do not expect to be increasing the cash rate for at least three years.” Lowe went on to say “As I noted earlier, our balance sheet has increased considerably since March, but larger increases have occurred in other countries. We are considering the implications of this as we work through our own options.”

GBP moved around on Brexit headlines and declined to 1.2868 at one point on Oct 15 – PM Johnson’s self-imposed Brexit deadline, but rallied back that day to above 1.3000. Sterling ended the week at 1.2914. The single currency remained on its backfoot. It ranged 1.1823 – 1.1691 and ended the week at 1.1713. EURGBP broke downside 0.9020 support on Wednesday briefly with EUR weakening as EC President Von der Leyen left the EU Leaders Summit to isolate as a member of her staff tested positive for COVID-19.  EURGBP moved back into its  0.9120-0.9020 range by the week’s end. The outlook for the USD in coming weeks will likely depend crucially on the outcome of the US election. While Biden is clearly in the lead to take the White House, polling for the senate is more mixed. We think a Democratic clean sweep is clearly bearish the USD. 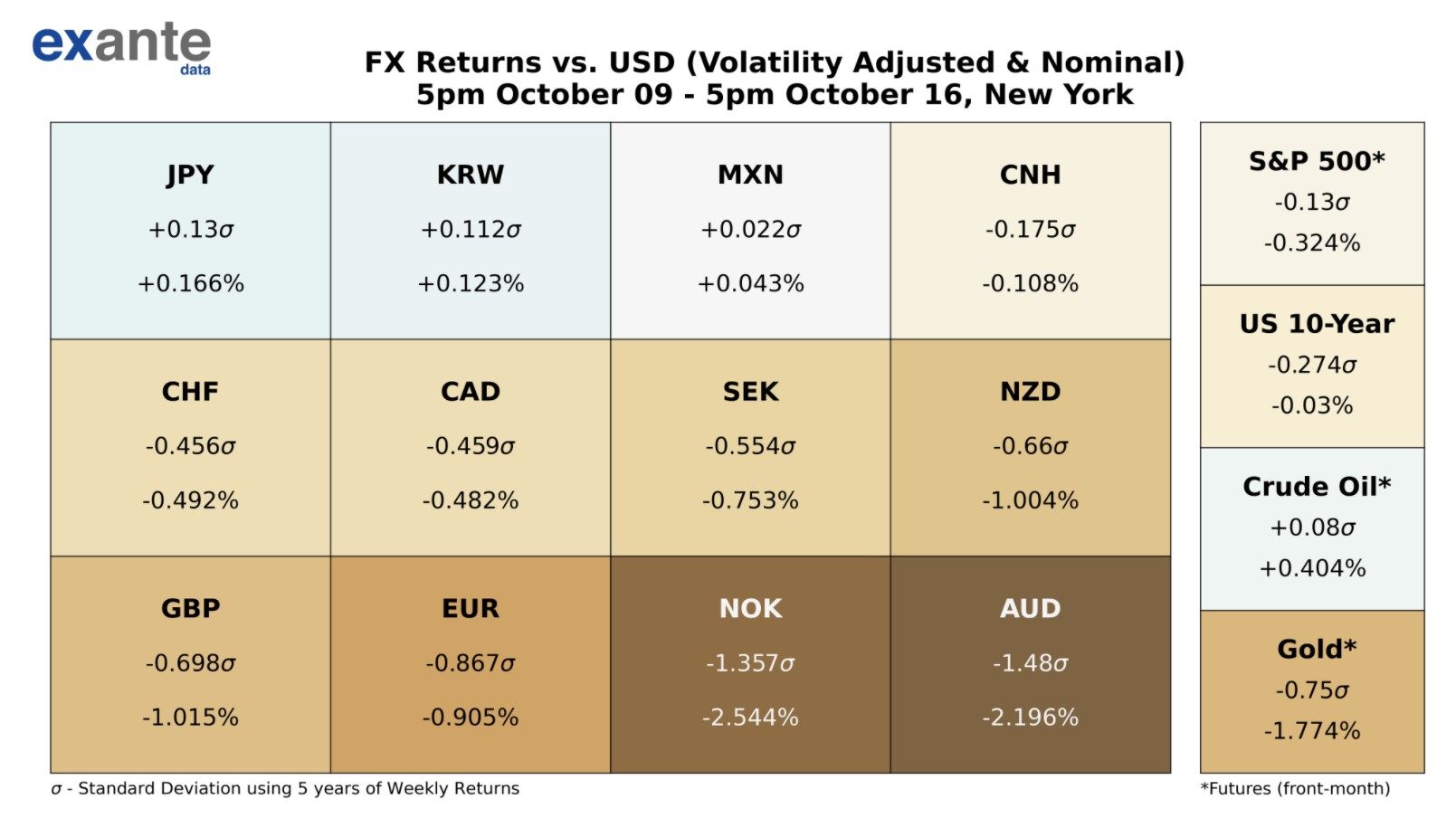 Our heatmap below for US states shows 2020 US Presidential Election Betting Odds, Biden % point lead daily.  PredictIt data show a kneejerk reaction toward VP Biden when President Trump tested positive for coronavirus on October 2. Odds shifted back toward President Trump during the October 10-12 period when he appeared briefly at the White House in front of hundreds of supporters (October 10) and when he resumed in person campaigning with an event in Florida (October 12). The “duelling” Town Halls held by both presidential candidates on October 15 didn’t shift the odds much.  Alaska and South Carolina odds have shifted recently deeper towards Trump, whereas North Carolina odds have shifted toward Biden and Wisconsin odds a bit deeper toward Biden.  Florida odds are in Biden territory but less so than a week ago.

See here for a heatmap that shows Biden *daily change* in % point lead – one can see the shifts a bit more clearly. 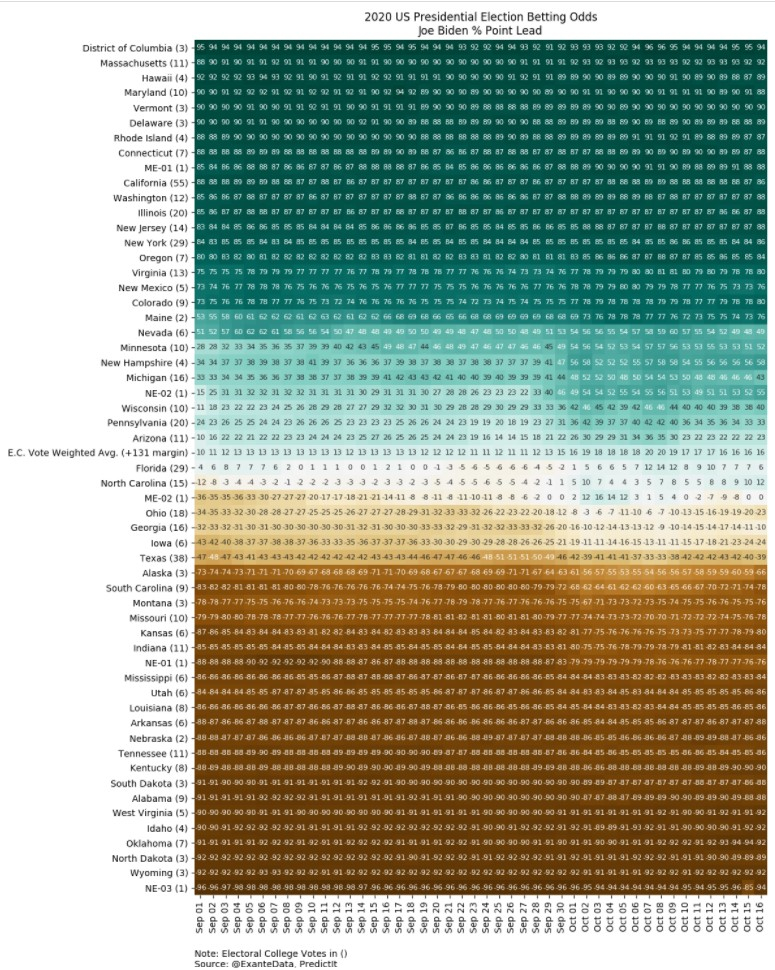 The chart below shows New Job Postings Online, Y/Y% for US states with the largest economies.  After turning down in September, online jobs postings are slowly turning up again. Illinois is doing better than the national figure as is Texas slightly – jobs postings there accelerated a bit in the latest week. Florida is keeping pace with the national reading, while California and New York are underperforming it.
US initial jobless claims rose 53k from week prior – coming in 898k. California has paused its processing of initial claims for two weeks in order to reduce its backlog and implement fraud prevention. The California figure reported in this week’s initial jobless claims release reflects the level reported during the last week prior to the pause.
Here is our heatmap of all US states New Job Postings Online, Y/Y%.
It is sorted worst to first. Hawaii’s online jobs postings continue to be the most depressed. Its tourism industry has suffered greatly. On October 15, in order to encourage tourism, the state commenced The Safe Travels Hawai‘i program. “Under the program, travelers now have the option of taking a Nucleic Acid Amplification Test (NAAT) from a trusted testing partner, and if given a negative result for COVID-19, allowed to bypass the state’s 14-day mandatory quarantine.” The first trans-Pacific flight to Hawaii arrived Thursday. 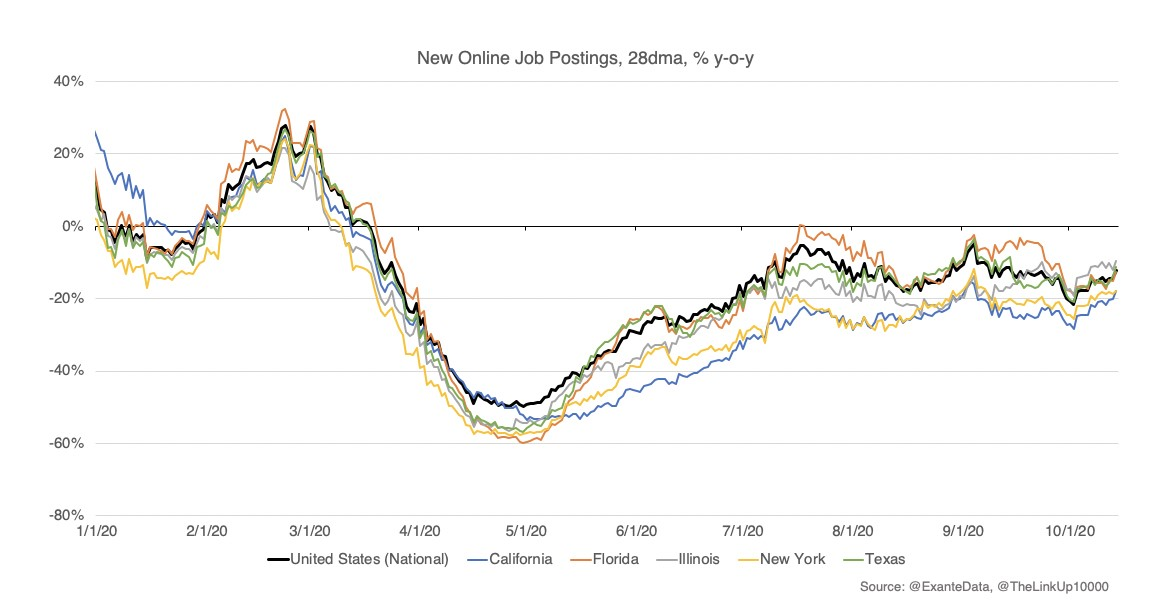 International: Trends in Europe intensify.  While Spain seems to be generating results from restrictions to fight coronavirus, an expanding list of countries in Europe show problematic growth. Policy tightening elsewhere in Europe will only be able to show results towards end-October, given the lags.

Some recently announced restrictions in Europe include: curfew for Paris and eight surrounding metropolitan areas and bans all private parties, including weddings, in public event spaces. The Netherlands will return to a “partial lockdown”, closing bars and restaurants and prohibiting public gatherings of more than four people.

Specifically, a number of European countries are now seeing case growth greater than 2,000 per million over two weeks. Hospital pressure is building widely and a number of countries are close to the peaks they saw in the first wave. Netherlands and Belgium are far from their peaks but their hospitals are burdened. Since restrictive measures have only been taken in a number of countries recently and work with a lag, some countries should see improvement by mid-October, but others not until end-October/early November. The pickup in new cases has pushed our expectation of daily fatalities up towards 500 per day in Europe over the next two weeks (chart below).  See here for a look at individual countries’ COVID-19 cases and trend. See here for our heatmap that shows the trend of daily growth in confirmed cases for some major countries and their hit ratios in order to compare growth rates between countries.

US: Cases have been rising (chart below), and are now at their highest since mid-August. However, the outlook remains broadly stable with hotspots in the upper Midwest seeing high case growth and rising hospital pressure. We need to keep a close eye on negative trends in more economically significant and populous states in the Great Lakes (Illinois, Indiana, Michigan, Ohio and Pennsylvania) for signs the the US second wave in the Northern Plains is seeding a potential third wave elsewhere. Wisconsin is the worst off of the more populous, economically and politically important states with both high cases and a very high hit ratio. Of the top 20 worst US counties in terms of weekly new COVID-19 cases per capita, Wisconsin has 8 counties in the top 20 — see here.  Our heatmap here shows the trend of daily growth in confirmed coronavirus cases among US states, along with the trend of daily testing hit ratios. 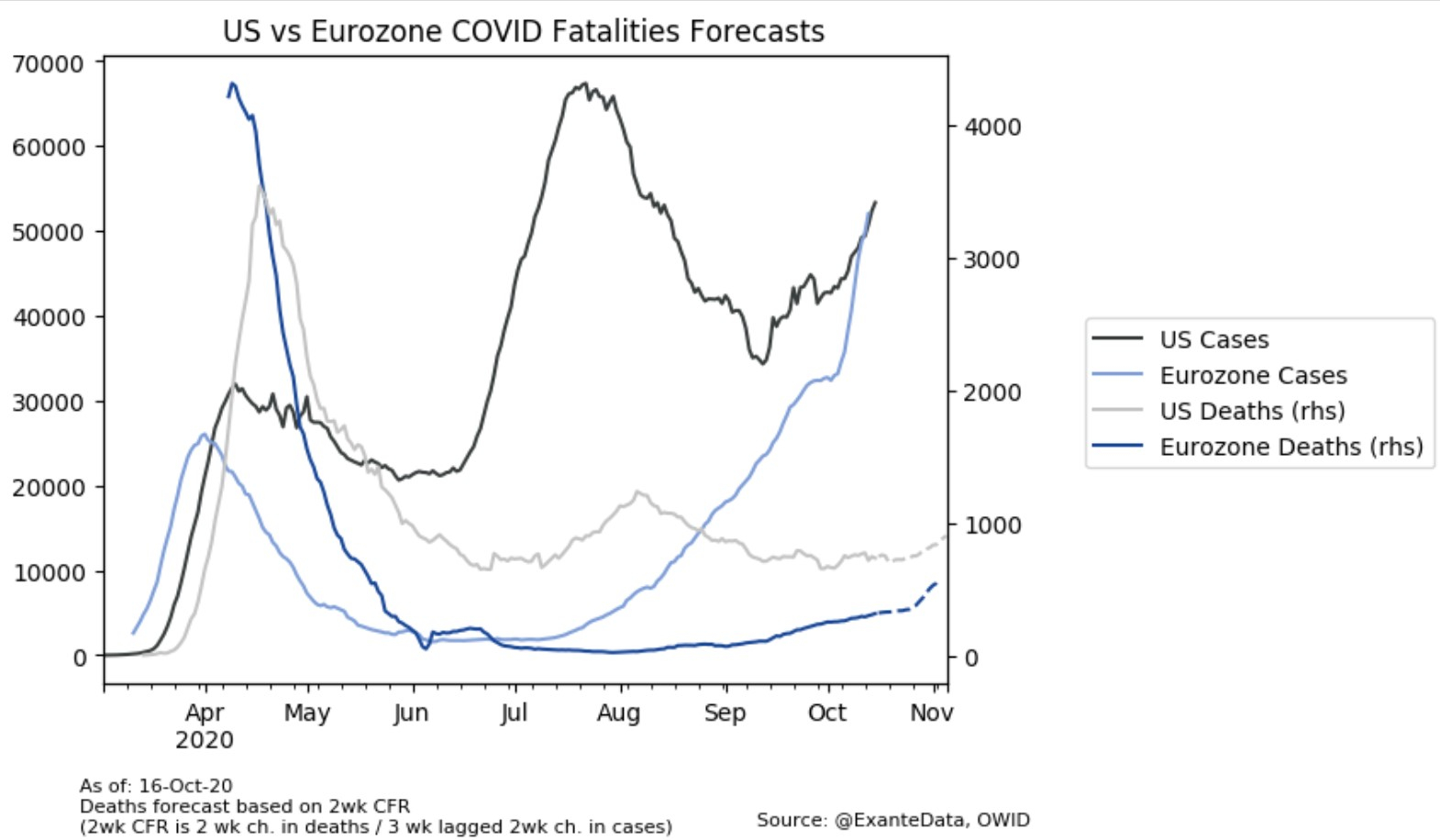 London: This week, tougher restrictions were announced for London.  Our chart on the left below looks at the five most affected London Boroughs – trend daily COVID-19 cases there have exceeded the March numbers. But, second wave cases are less likely to be severe. Fortunately, despite London Boroughs’ trend daily COVID-19 cases rising, London hospital pressure is stable (chart on right).

Exante Data has joined LinkedIn Stories. Our stories are available to view on the LinkedIn mobile app. Follow our Exante Data Company page to see our circle icon at the top of your app and tap it.  In Stories, we will introduce you to Exante, give a behind the scenes look on what we are doing, keep you up to date on market news, and post charts – alt data, economic, forex, and Covid-19 related.

Founder Jens Nordvig talks Twitter – how he uses it and insights he has gained in this thread. “It has also been a great help to use the ‘robotic feeds’ we now have on @ExanteData. I use them to absorb more information myself.  It is a way to come up with fresh perspectives, from raw data.”  Our market and Covid-19 charts are updated daily on our Twitter feed.

Bloomberg users – you can view Exante Data tweets on the terminal. Users can type into the blue command line: TWEETS BY EXANTE <GO>. Alternatively, to add to Launchpad:  1. Run SOCI <GO> 2. Type into the orange box Exante 3. Select the handle at the bottom “TWT_EXANTEDATA” 4. Click the white LLP <GO> to Open in Launchpad to view in Launchpad mode 5. To save the search >>> Click Actions in the top red tool bar >> Save Search

Senior Advisor Brad Setser has a new blog out for the Council on Foreign Relations – Reframing the Collective Action Problem in Sovereign Bond  Restructuring. “A recent white paper from Lazard points out that emerging market sovereign bond holdings are often fairly concentrated among a handful of big players.  The main impediment to collective action may be less that bond holders are dispersed, and more that a handful of big holders all compete against each other and the benchmark.”