The latest personal income and savings data for June were released last week – the Exante Data Team took a look:  “The trends are interesting for what they may imply about growth, inflation and the external balance going forward. After collapsing spectacularly during the crisis, and then rebounding smartly in its immediate aftermath, growth in total nominal employment compensation has slowed as it has approached its pre-crisis trend level (chart below – top). At the same time, fiscal transfers, which sought to offset lost employment income (albeit in lumpy installments) have also begun to roll off. As a result, total personal income has been declining but remains slightly above its pre-crisis trend (chart below – bottom).” 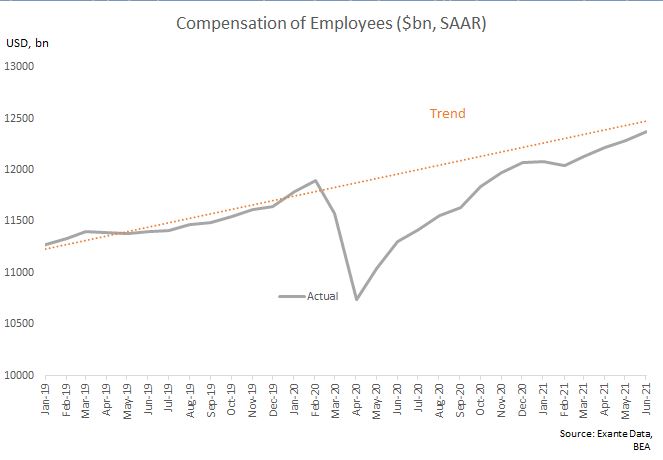 USD was stronger on the week, supported by a mix of hawkish US data, Fed comments, and global growth concerns. This week’s USD strength was mostly explained by increases in US yields against the rest of the world (chart below). The DXY Index ranged 91.85-92.82. On Friday, EURUSD fell below 1.1800, pushing the DXY Index higher. EURUSD low was 1.1755. On the week, within the G10, CHF, EUR, and CAD declined the most vs. USD in that order – heatmap here. 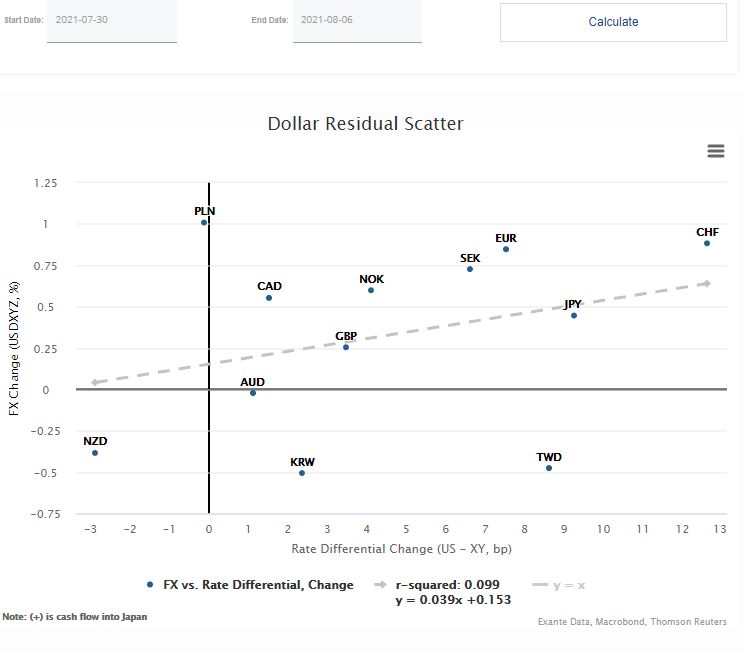 Strategist Martin Rassmussen takes a look at global case trends:  “The Delta outbreaks have lost steam in most places, and case growth is now low or negative in most EMs (chart below). What’s more, case growth has fallen in most DMs relative to last week. Japan, Philippines, Norway, Pakistan and Israel are exceptions to the general global improvement, however. In these places, case growth and numbers have increased in the last week. In general, the global picture looks much more encouraging now than it did a week ago.”

China: “China’s case numbers continue to increase exponentially, and the rise in cases is spread more evenly across provinces than during earlier outbreaks. We distinguish between symptomatic cases (which are often taken to be the “total”) and asymptomatic ones, and speculate that a large number of asymptomatic cases might have gone undetected so far. Subway usage and road congestion continues to weaken, and has become more widespread across cities.”

US: “Among US states, Hawaii, Florida, Louisiana, and Mississippi are currently seeing the worst case trends. In general, southern states are seeing the worst outbreaks.” See the rise in cases nationally here. See the momentum of covid cases by state here.

On global vaccination trends, Martin notes: “China still vaccinates at a rapid speed, though there has been a marginal pullback in the last couple of days. In the EU, the decline in doses administered continues to get steeper. Our “major EMs” and “other EMs and frontier markets” groups now vaccine at broadly the same speed – around 0.4 doses per 100 people each day – though there has been a slight decline his week. The speed in the US remains low but is increasing slowly.” 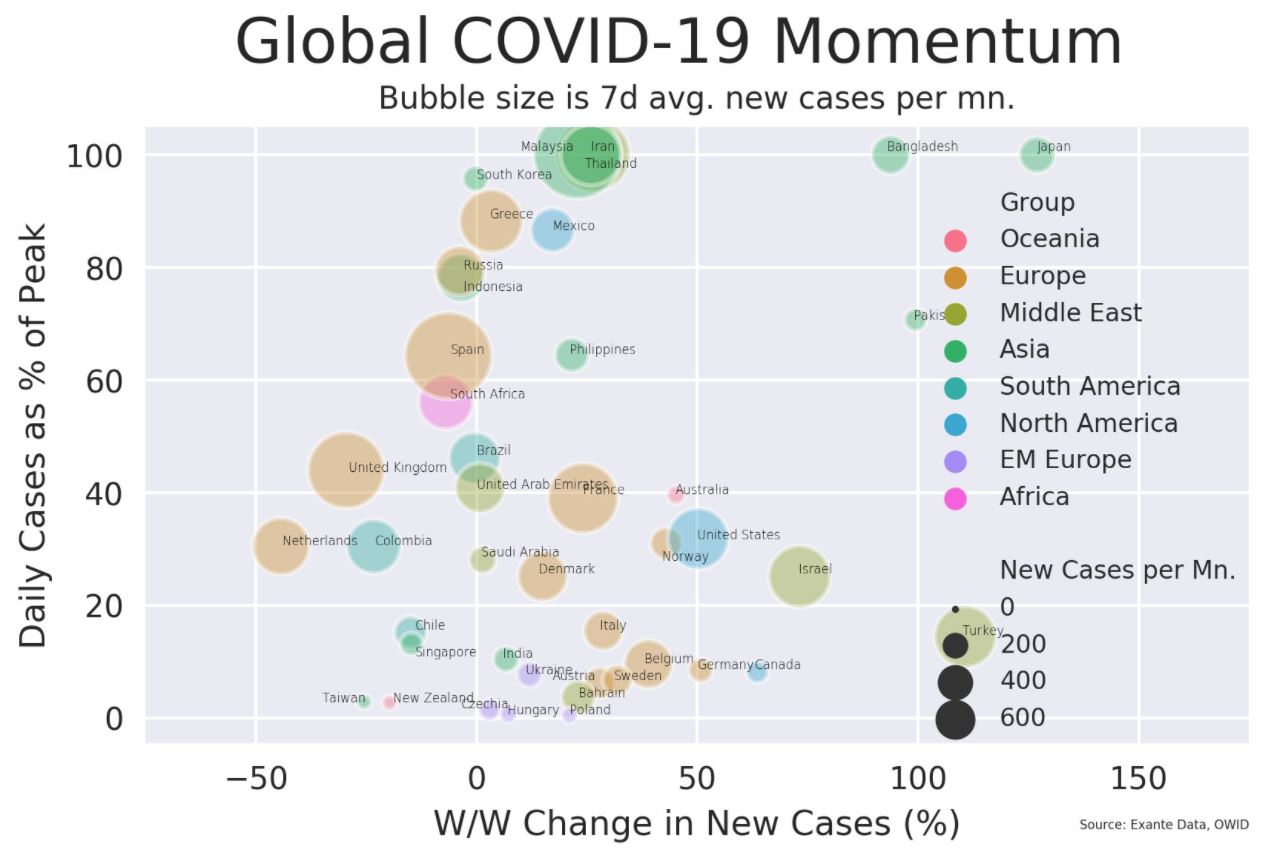 Founder Jens Nordvig spoke to MarketWatch on Alternative Data: What Investors Need to Know. “Covid-19 helped feed a surge in interest in alternative data as investors sought real-time insights into the economy and the pandemic. Economist Jens Nordvig, founder of Exante Data and MarketWatch’s Bill Watts discuss what works and the evolving role of alternative data in making investment decisions.”   Link here to watch  – it is free with registration. You can listen on Apple podcast here and on Spotify here.

Jens appeared on Bloomberg Surveillance and talked:  Delta variant in the UK, US, and  Asia Pacific. What the “reverse cliff” in vaccine supply will mean for Asia and why countries that pursued a Covid lockdown strategy are now vulnerable.

Head of Asia Pacific, Grant Wilson, spoke to Ausbiz, saying  “Australia’s COVID-19 transition plan is a wonderfully terrifying and discordant project ‘at best.’  Grant tells Dave, Australia needs to understand the position it is in – the biggest post-war challenge the nation has face. He continues to expect that in the aggregate Australia is looking at a prolonged downturn, including a technical double-dip recession.” You can watch the interview here – it starts 1:18 in.
Grant was quoted in this AFR article: Bubble finally bursts for Chinese capitalism “Taking on Jack Ma late last year, which saw the Any IPO abruptly pulled, and Alibaba restructured, was emblematic. Nothing was safe after that.”
We held a Asia Update call for clients discussing: the possibility of another recession in Australia, a delta wave in China, and implications for local assets and global macro strategy.