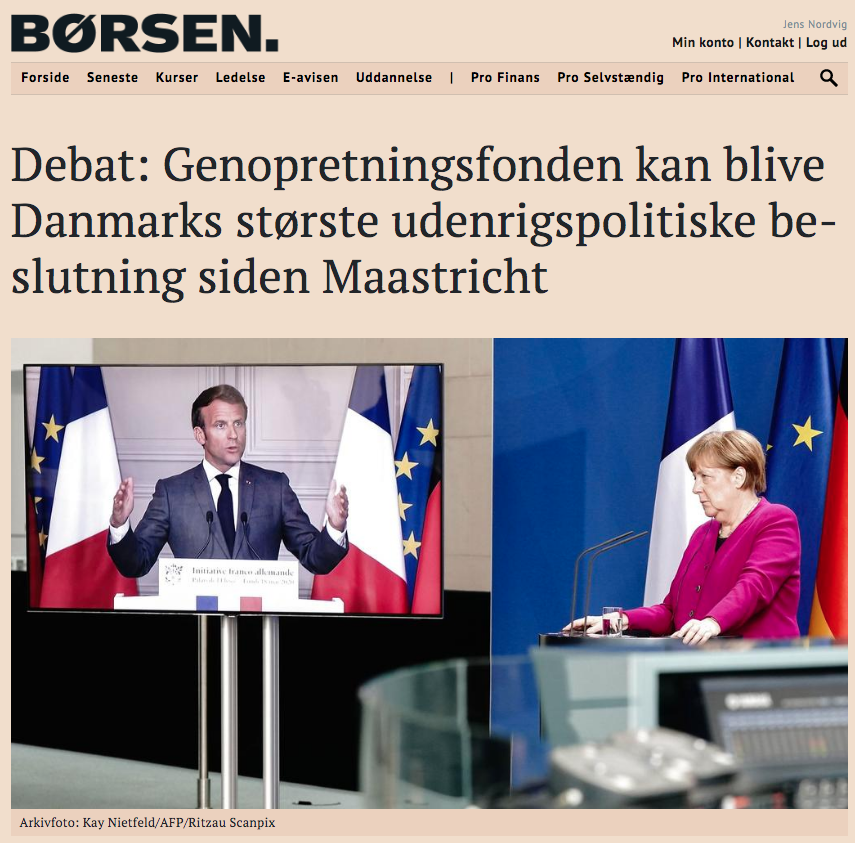 Open Letter to the ‘Frugal Four’: What kind of Europe do you want in the decades ahead?

By Jens Nordvig, Founder and CEO of Exante Data Inc.

Europe is facing an unprecedented shock from the coronavirus, and policy makers are starting to put in motion a historical policy response. The European Commission yesterday proposed a EUR750bn Recovery Fund, based on the ideas outlined by Chancellor Merkel and President Macron on May 18.

As usual, getting things done in Europe is complicated, and the proposal is facing opposition from Austria, Denmark, Holland and Sweden.

But this is a historical moment for Europe, and all countries should have a serious debate about the path ahead before getting locked into a specific stance.

Faced with a war-like situation, it is a time for solidarity. And lack of cooperation could have dramatic consequences for growth, financial stability and even political stability. Each country should make its own decision. But the decision is about much more than the size of a line item in the budget process; it could well define the future of Europe in the coming decades.

Something important happened in Europe on May 18, 2020. Germany and France proposed a bold Recovery Fund, giving the EU more capacity to deal with an unprecedented shock. The fund is necessary to help those suffering most from the economic shock caused by COVID. Importantly, Germany has finally shown leadership and willingness to support other EU member countries via substantial EU transfers.

But Denmark, along with Austria, Holland and Sweden are against, and have proposed a toned down form of support, via loans only. This is a risky strategy. Europe is at a breaking point. Solidarity is crucial to ensure financial stability and maintain political cohesion, without which there will be no European growth. As a country with comprehensive social security, solidarity should align well with Danish values. But even from a purely economic perspective, a Danish contribution to a Recovery Fund may be a very good investment.

Danish policy makers should think hard about whether it is worth saving a cost in the region EUR300 million per year, and risk persistent stability and ‘bad will’ from European partners.

The key problem with the Euro since its founding in 1999 has been that it was (and is) a currency without a fiscal union. The Euro-crisis 2010-2012 showed that very clearly, and various backstop facilities were put in place to keep it together (EFSF, LTRO, ESM, OMT).

Then came the coronavirus, and the Euro was back in crisis mode, and we saw the usual financial instability, especially in Italy in recent months. The existing backstop infrastructure was insufficient, there was insufficient political will to create more policy space, and the legal challenge from the German constitutional court Karlsruhe threatened to make things worse.

It is against this background that the Merkel and Macron proposal is so crucial. The plan to create an additional EUR500bn of EUR spending power, via an unprecedented level EU level borrowing.

But the news is getting too little press, and there seem to have oddly little debate in Denmark about this crucial foreign policy decision. Perhaps the biggest since the Maastricht vote(s). The Merkel-Macron proposal, spelled out in more detail yesterday by the European Commission, is a significant one. It may be a first historic step to address the lack of fiscal capacity in the EU/Eurozone. As such, it deserves a great deal of attention and careful consideration.

Financing of the Recovery Fund would be spread out over multiple years, and interest rates far out the yield curve are at or below zero. Hence, the interest cost is minimal. The actual costs for Denmark comes via the payments needed to repay the principal. If those transfers are spread over 20 years, and Denmark’s contribution is 2%, the additional payment would be around EUR500 million per year, eller 3.7 milliarder kroner per year.

We can compare this with the current contribution to the EU (around DKK22bn per year) and aid to developing countries (around DKK16bn per year).

This is a gross contribution, as Denmark would get some of it back via transfers from the EU. But more importantly, Denmark would derive considerable benefits from:

From a pure budget perspective, it should also be noted that more 1%  increase in the level of GDP generates (at least) DKK10bn in extra income for the government budget.

As such, it is entirely possible that the Danish contribution (if it means that the Recovery Fund gets on the road) will pay for itself, via higher growth and higher income.

In addition, there is the hard-to-measure goodwill that would be derived from supporting the rescue fund

And if Germany can make a U-turn (and Merkel does seem to have the backing of the CDU for a bigger EU budget), then perhaps others can come around too. We note that the Netherlands have been relatively quiet so far, which could be a positive signal. This is the key country to watch. Does Denmark want to block this, almost alone with mostly together with a right-wing Austria government?

This is a big decision, perhaps the biggest Danish foreign policy decision since the Maastricht decision in 1992. It will cost something. But if this investment can help support European growth, stabilize European politics and reduce populist forces and support democracy (fundamentally what Europeanism is about) perhaps it is indeed well worth it.