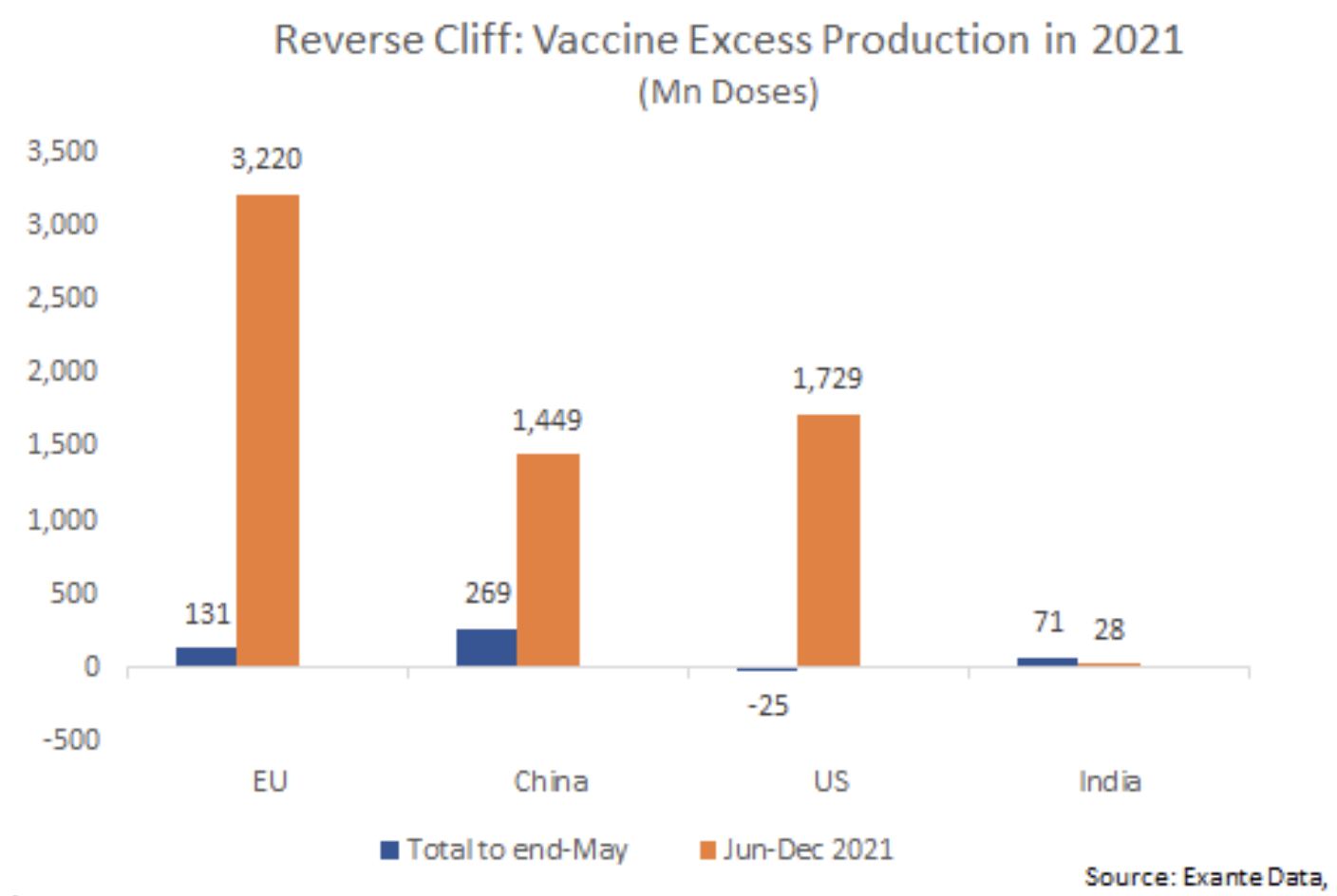 We want to communicate with the public, and stay in touch with all our contacts around the world. But we also want to keep our proprietary content exclusive for our clients. That is ultimately how we make a living. Hence, it is a tricky balance. Normally, we keep all our market research content behind paywall with occasional public writings on policy issues on our substack: Money Inside and Out.

But today, we want to make an exception, on an important topic, both for global health and global markets. Over the last two months, we have been doing detailed analysis around global vaccine supply, and how it will be increasingly shared around the world. We call this dynamic the “Reverse Cliff Effect”. Here we share key conclusions:

The vaccination roll-out in the US and the EU has now matured to a degree where reopening is appropriate and likely fully sustainable. But in the EM world, from Brazil to Russia to Indonesia, we continue to see large COVID waves. Looking ahead, however, the global picture is set to improve notably. Exports from the EU and the US will surge in coming months, both as a function of increased production AND reduced local demand in those regions. This will be a huge factor for emerging markets. The reverse cliff effect for global vaccine supply means that the large majority of EM countries can reach critical levels of protection during H2 2021, allowing safe reopening of most sectors. This will support global growth notably in coming quarters, with positive implications for EM economic performance and global risk assets.

There is currently intense focus on variants, in particular the so-called Delta variant, which has caused a delay in the reopening process in the UK, even if the UK is quite advanced in its vaccine roll-out.

But the vaccines are still effective, as illustrated in the table below. This conclusion is more powerful for the Pfizer vaccine than the AstraZeneca product (and we do not yet have detailed studies for other products). But since the mRNA vaccines (Moderna and Pfizer) are the most important elements in the global vaccine roll-out from here, these are still encouraging results.

Based on these results, the most important dynamic around the virus trajectory remains the vaccine supply.

These numbers seem so large that they are hard to believe. But it is the conclusion you get both from looking at data from producers and from data released by countries.

And we are already starting to see this reality play out:

Our country by country analysis shows that majority of countries in the world (in DM and EM) will see much improved vaccine supply from Q3 this year. And even countries that barely vaccinated in Jan-May, will see substantial progress by Sep-2021. There is some uncertainty about the countries that rely on Chinese product and AstraZeneca product, since information about efficacy is either unavailable or less convincing. But a lot of countries will rely on Pfizer, Moderna and J&J product, for which the results remain solid.

Acceleration in EM already in motion 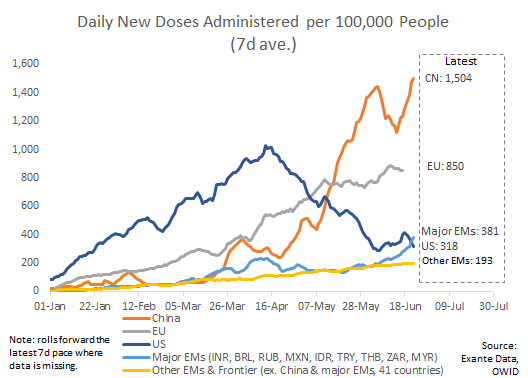 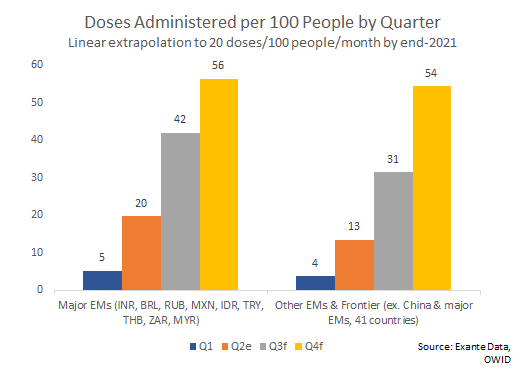 The below two charts compares cumulative doses administered by the end of each quarter depending on whether EMs and frontier markets continue to vaccinate at the current pace (a “worst case scenario”), or manage to increase the pace of vaccination to 20 or 30 doses per 100 people each month. The basic point is that the level of protection is set to jump notably in H2 relative to the moderate level of protection in H1.

Beyond the priority of protecting public health, this Reverse Cliff is an important topic for the global economy. As we have seen in the US and are seeing now in the EU, vaccinations allow reopening. The next phase moves from regional progress to global reopening, including normalization of international tourism. Given our analysis, we think these effects will kick in faster than many currently project—allowing the health and economic benefits of the vaccination program to be shared more widely than is currently the case. That said, given the concerns about new strains, international tourism may be the last sector to fully recover.

Back in April,  the EU was seen as a vaccine laggard. Many questioned if it would ever catch up with the US and if pronounced reopening would be possible in the foreseeable future? The EU has now been vaccinating faster than the US since early-May, and aggressive reopening is in motion across EU27.

As recently as a month ago, China was way behind on cumulative vaccinations. But with an impressive pace >1% of the population per day, China is now catching up fast (although the efficacy of Chinese vaccines remain uncertain).

While there is uncertainty about how new strains will impact the overall virus trajectory, the evidence still points to solid efficacy, especially for mRNA vaccines (such as Pfizer). This basic fact, combined with the prospect of a reverse cliff effect for vaccine supply for the majority of countries in the world suggest that notable reopening will be possible in H2 2021 around the world. This should matter greatly for health outcomes, the global growth outlook, and global risk assets.