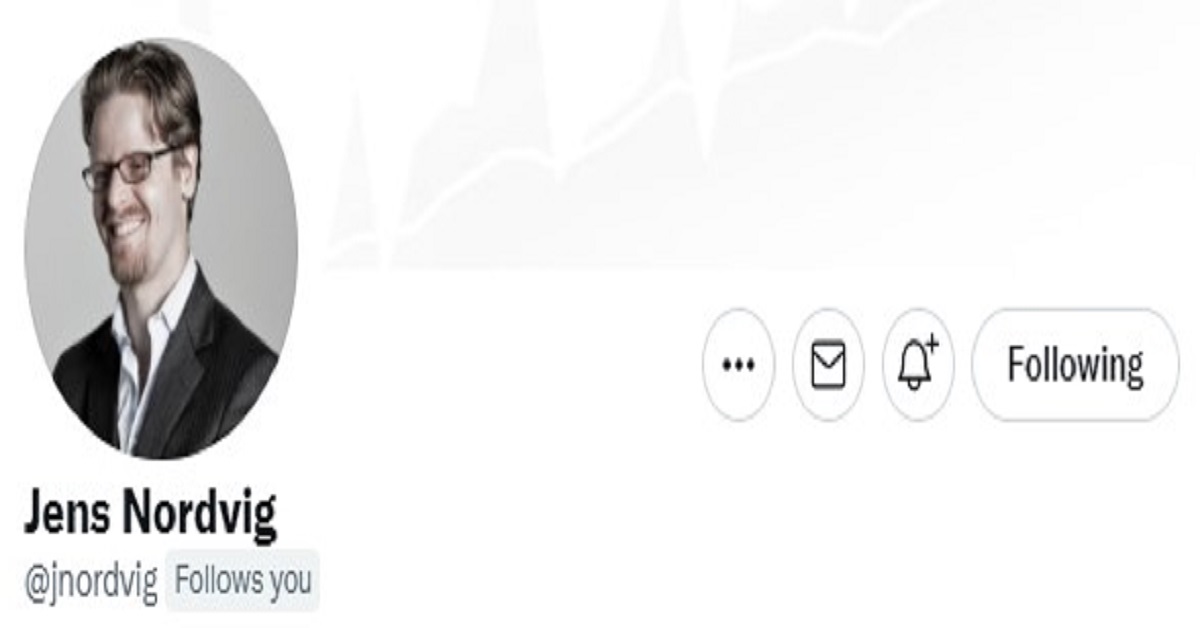 Yesterday (Sept 18th), I did a mini-thread on what is going on under the surface in Chinese High Yield credit (and it generated A LOT of feedback). Hence, here is a follow up thread on the structural issues in Chinese real estate, and differences to the US in 2008.

Today, I will show some background data on the structural problem in Chinese real estate, and offer some basic perspectives on how the situation differs from the US in 2008 (not better or worse, but simple different)

The memory from the US in 2007-2008 is still fresh. The US housing market was too hot. There was too much leverage / building. And we ended up with a big crisis => the losses had to be allocated (globally), and policy makers were not willing to (or politically able) fill the gaps.

What is the Chinese situation? In China’s case, there is also an overbuilding problem. Very broadly, the capital stock per capita is, for example, is high given the country’s income level. 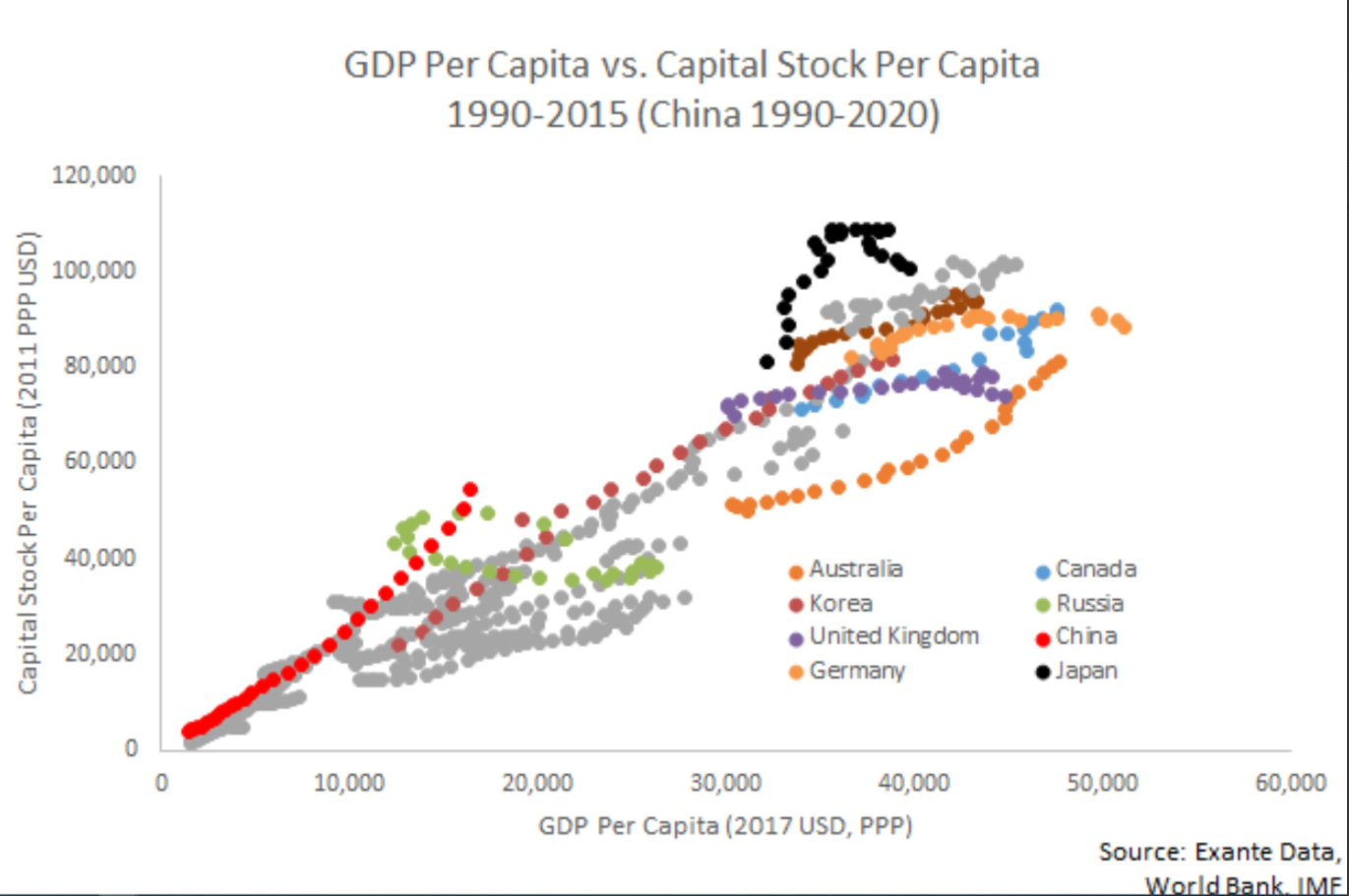 But let us focus on real estate more specifically. Here is a chart from an academic paper comparing floor area per capita in various countries (only up to 2012) China has been catching up with very wealthy countries fast. 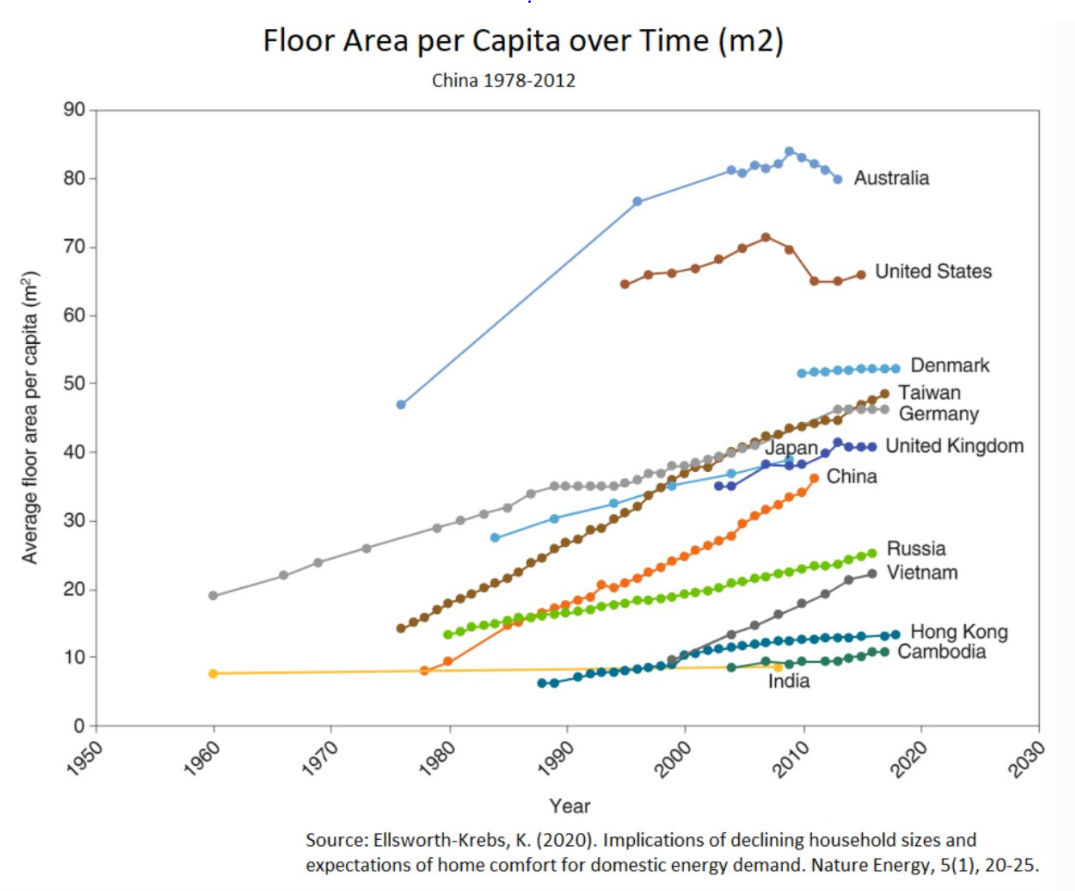 The trend has continued (and even accelerated) in recent years, and the floor area per capita is now likely around 50 m^2 (if we extrapolate the trend after 2018) and that would put China above almost all European countries (well above Germany and the UK; look at the chart above). 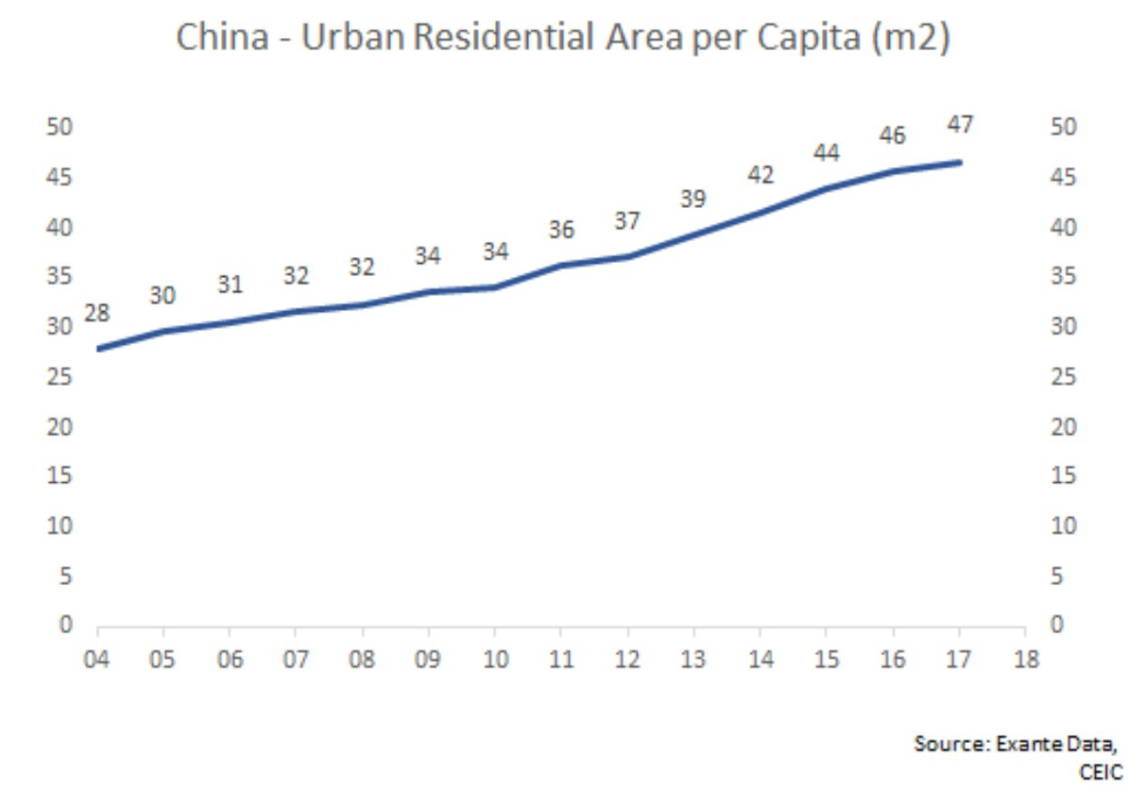 And then there are vacancy rates. This can be measured in many different ways (here via satellite), and a lot of Chinese cities really stand out. Way above the US and Japan, for example. 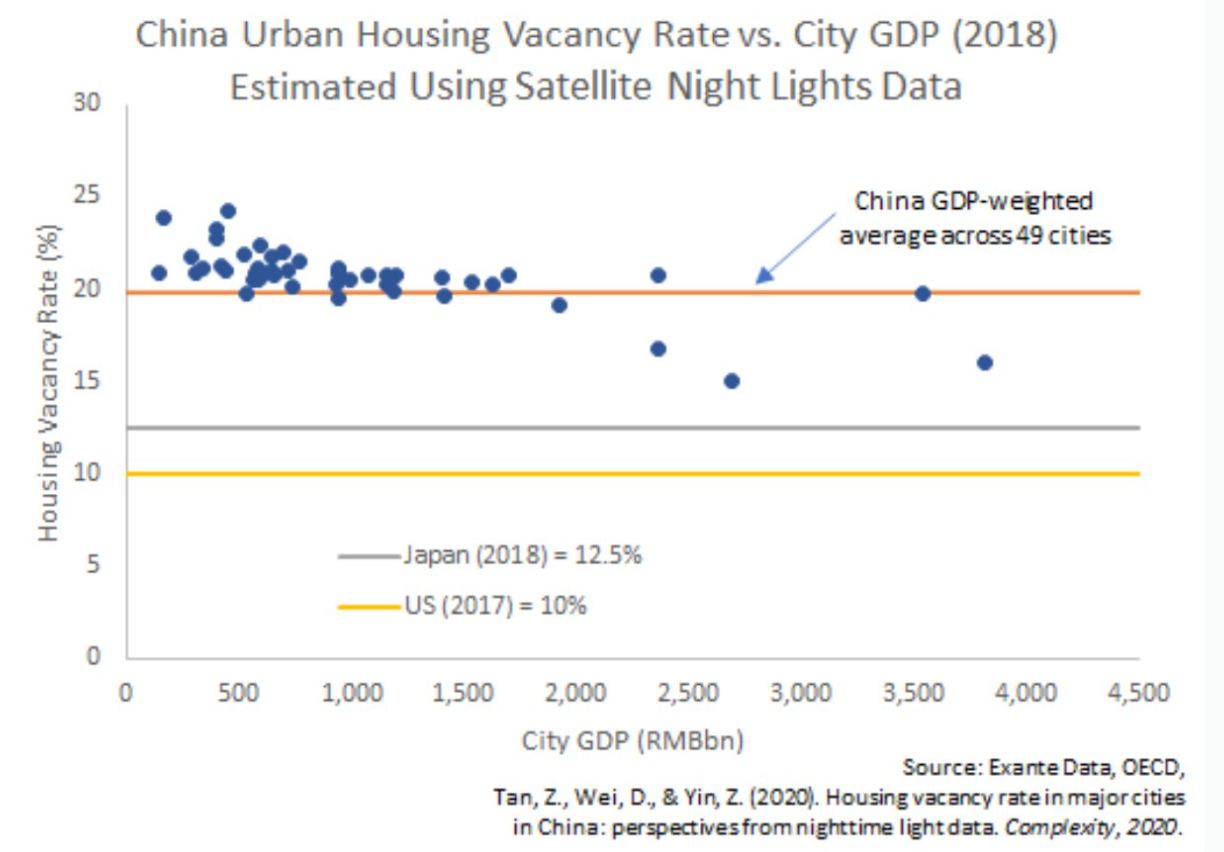 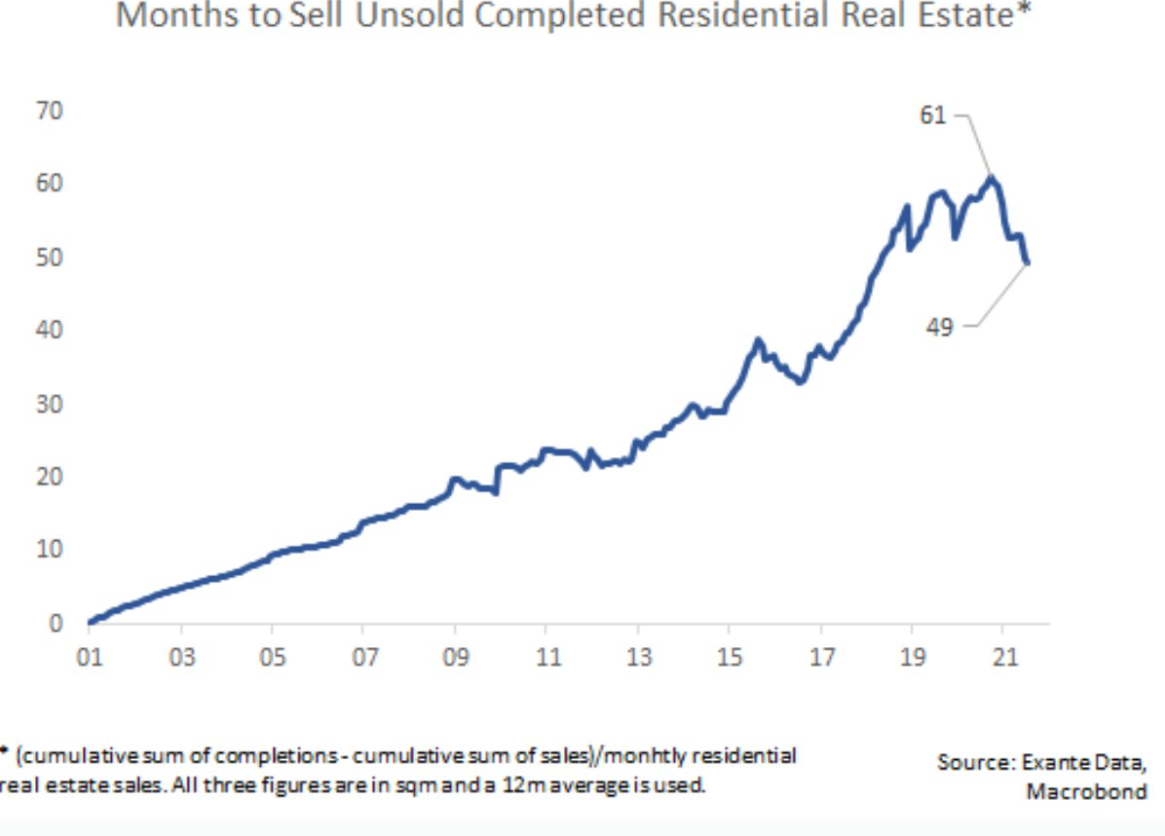 And then there are prices. Let us start with levels relative to incomes. The high end Chinese cities look VERY EXTREME in a global comparison. London used to be regarded as expensive, but look at Shanghai, Beijing and Shenzhen (London is cheap!) 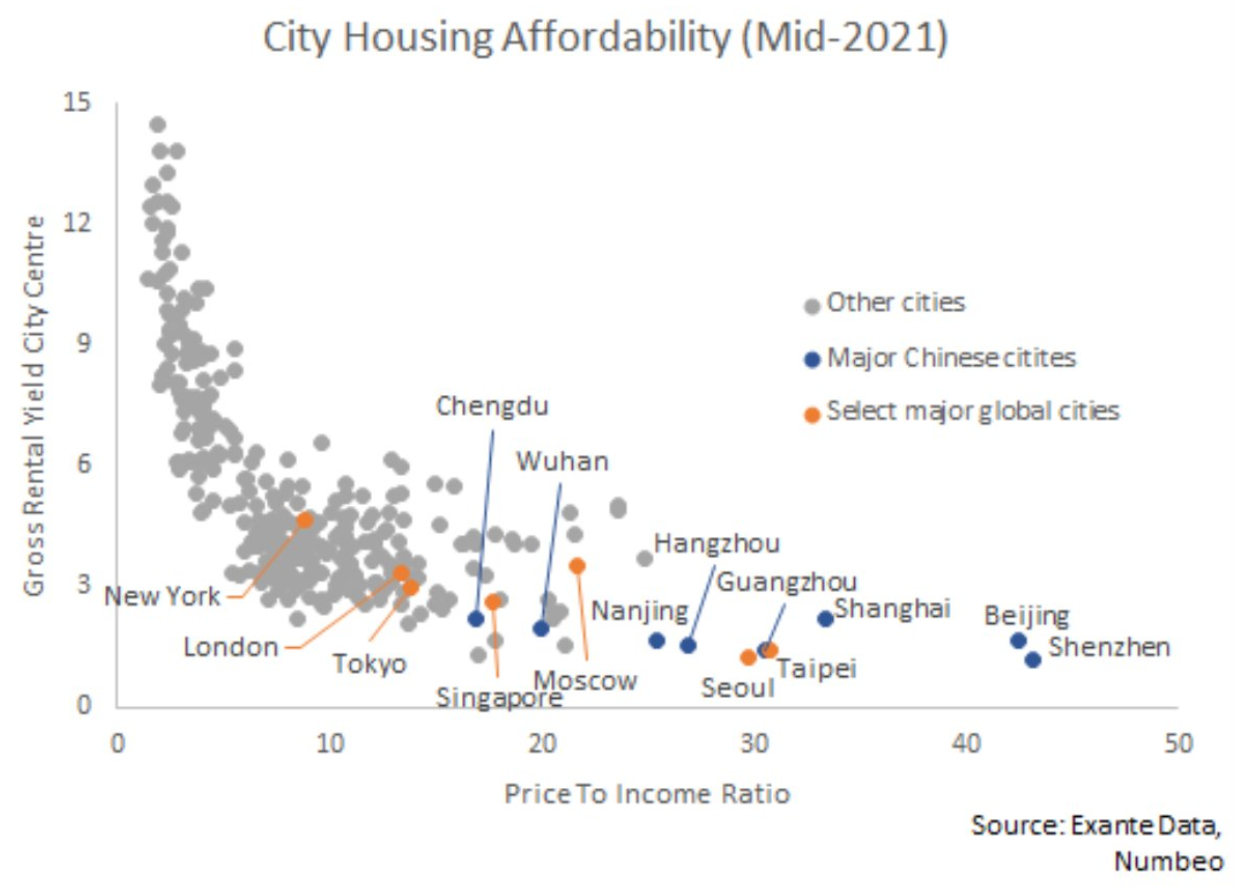 This brings us to prices (in change space). So far, we have not seen any dramatic price declines in China. In yoy terms (and even mom terms) we still have price increases. In this sense, a big correction (even if Evergrande is already correcting) is still ahead… 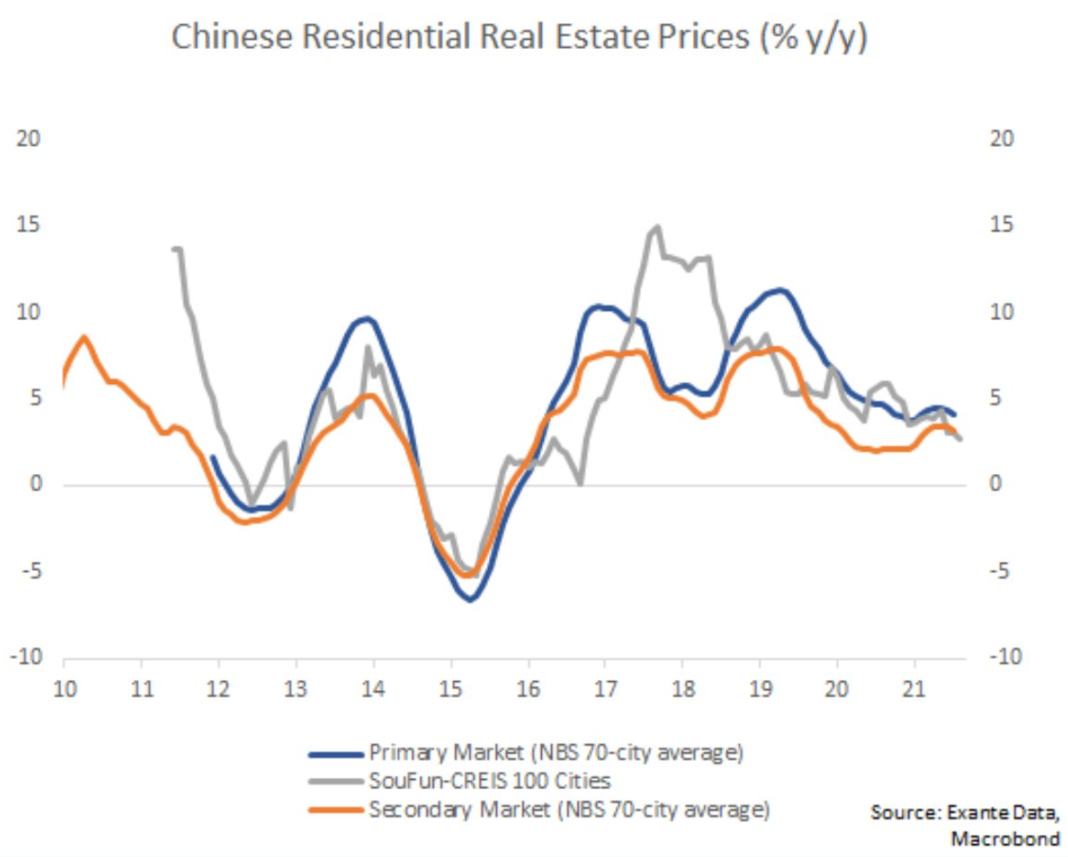 And now a few observations on why the US situation in 2008 is different from China in 2021, even if both countries are facing a challenge around overbuilding and likely price corrections…

First, monetary policy in China is different. Whereas many so-called developed countries around the world have embraced zero rates and QE policy over the last 10 years, China is not doing the same.

Here is a picture of the Chinese yield curve, short swap rates (which are close to policy rates) are around 2.5% and longer rates around 3.0% (more for end-users that do not have access to institutional money markets) In other words, China does not want to maximize credit growth. 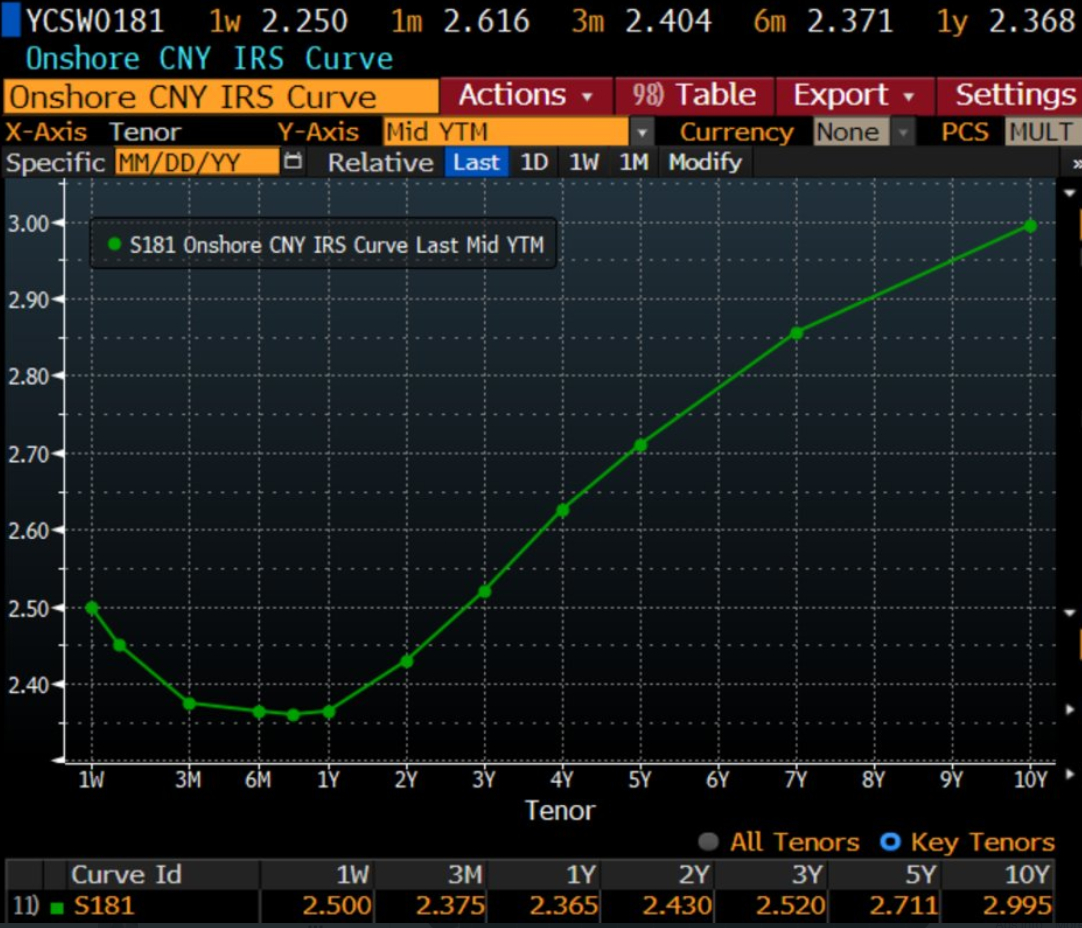 Second, the problem around developers (Evergrande foremost) was not the same in the US in 2007-2008. Yes, builders in the US took a hit. But the leverage was not on their own balance sheet => they all survived Here is a stock price chart: Horton, Lennar, Pulte (all still around). 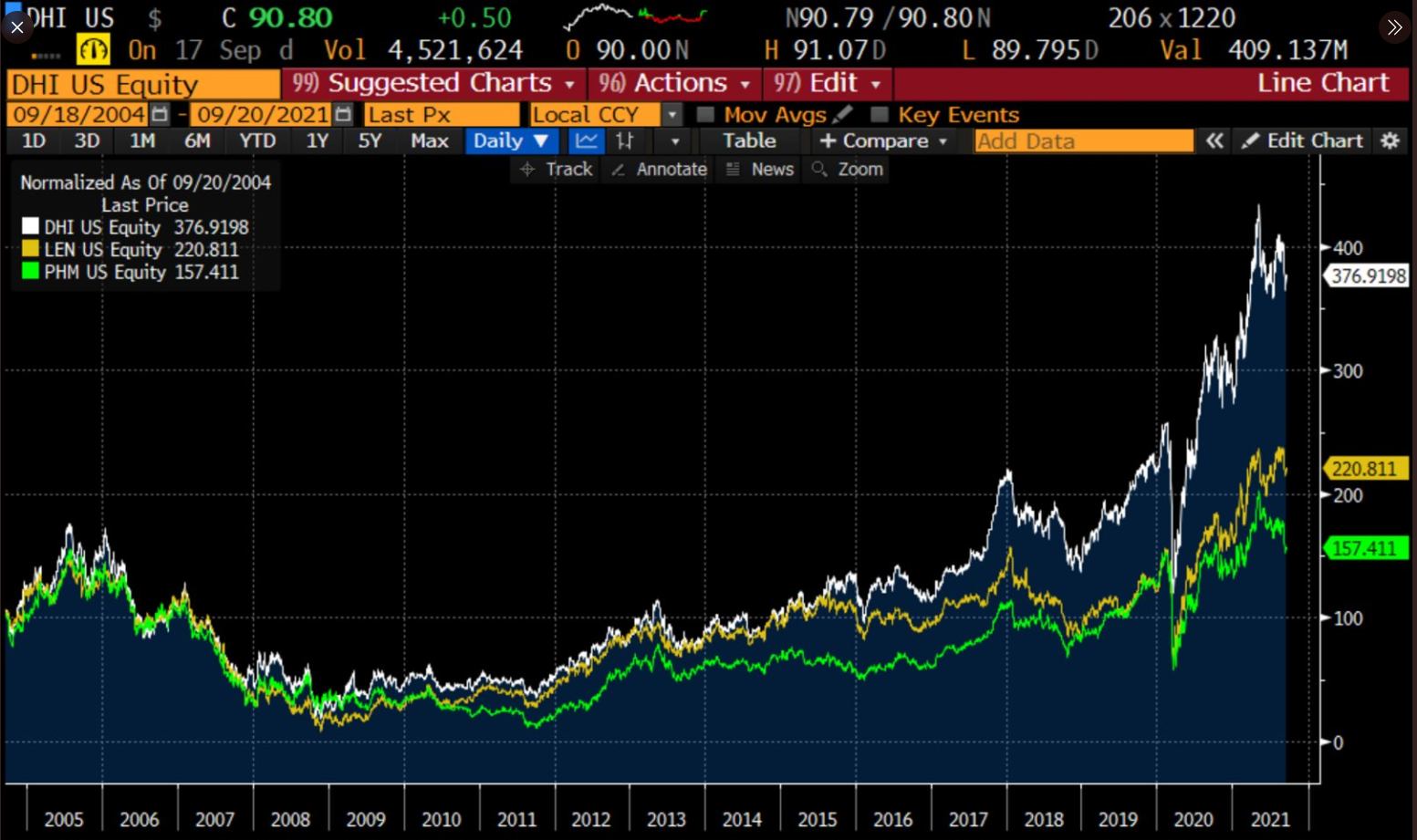 Third, the Chinese banking system is state-owned, and everybody around the world knows about Lehman. Policy makers may want to see deleveraging in the real estate sector. But Chinese policy makers do not want to see a broad tightening of credit conditions.

Fourth, foreign involvement is small in China. It is true that the high yield bond market has a sizable USD component (mostly foreign). But relative to the US, where subprime exposure was sold around the world, it is a much more local (controllable) system.

Fifth, there is the broader mortgage market. LTVs are different, & mortgage law is different too (full recourse in China, vs hand in keys approach in the US). Hence, the mortgage default cycle (at retail level) will not mirror the US one.

That said, prices could tank, so LTVs ex ante may not reflect future LTVs well. This is the reason that prices are so crucial to monitor. And prices have not moved much yet In the US price growth peaked in 2005 and turned negative in 2007. In China, the turning point is ahead. 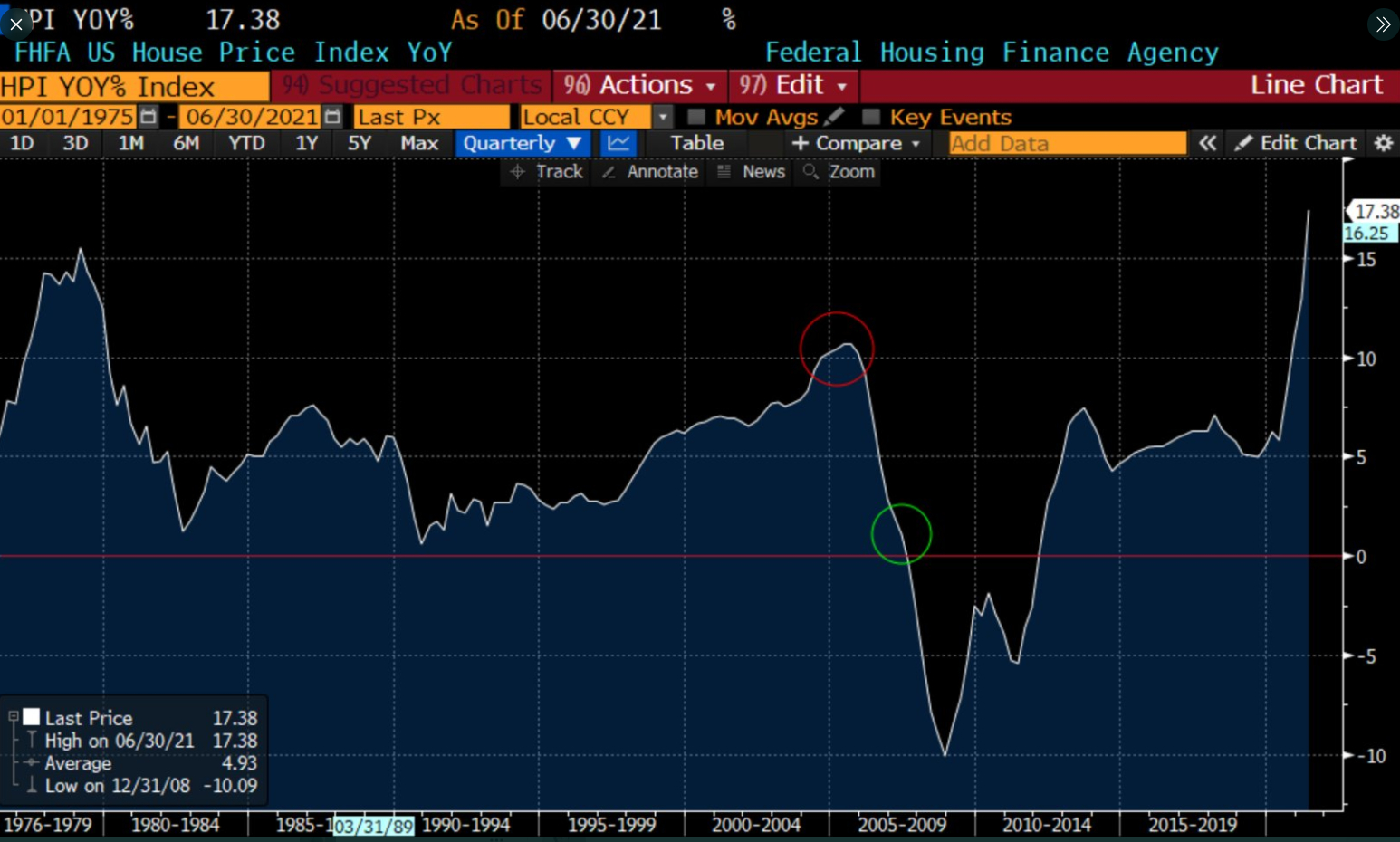 So what is the bottom line: Yesterday, I commented on the observable stress in the Chinese high-yield credit market. It is severe in real-estate. But other sectors are (for now) holding up. Today, I have shown a bunch of data, highlighting that the structural issues are BIG. The risk for China is that house prices, and real estate prices more broadly will drop very significantly, with negative implications for consumer confidence and growth. This is a risk that is still ahead…In terms of financial contagion, the risks are very different from the US in 2008, as policy makers around the world have all learnt to avoid ‘Lehman moments’. It is highly likely that China will push the state banks to continue to lend to ‘other’ sectors. As such, a broad-based credit crunch does not seem likely (credit supply will be ok). But if the housing market tanks, sentiment will follow, and credit demand could be a major problem. China is different. They have a major challenge at hand, and they will handle it differently. They want to deleverage real estate, without causing ransom casualties in other sectors => big decisions ahead…It is likely to be a situation with more ‘real contagion’ (through sectoral activity adjustment, domestically and internationally), as opposed to uncontrolled financial stress and random macro-level credit tightening.

I will leave it at that. We have to watch how contagion effects evolve (so far, real estate centric). But the structural issues at hand are VERY big, so it is certainly not a time to relax. More threads ahead, I guess.